Thermoset or thermoplastic? That’s a question often asked when CompositesWorld researches the stories it publishes. Is a particular composite application taking advantage of the high mechanical properties inherent in many thermoset resins, or making use of the weldability, formability or recyclability gained from thermoplastics? Thanks to a handful of innovative companies, the answer for many applications may more frequently become “both,” as reprocessable thermosets combining the properties of thermosets and thermoplastics prove themselves on the market. What follows are the top current contenders in this field.

Arkema’s (Colombes, France and King of Prussia, Pa., U.S.) Elium liquid thermoplastic resin was introduced in 2014. Reported to be the first on the market, Elium is a thermoplastic resin — thermoformable, weldable, recyclable — that, like a thermoset resin, exhibits high mechanical properties and is compatible with conventional thermoset resin manufacturing processes.

The company has released three varieties of Elium, specifically for infusion, resin transfer molding (RTM) and wet compression molding. Elium is also said to be suitable for pultrusion. Example applications include wind turbine blades, concrete reinforcement and window profiles, and Arkema has said the material shows potential in automotive, aerospace and sporting goods markets as well.

Cecence (Salisbury, U.K.) has developed a family of thermoplastic epoxy products, called the K-Series, available as a prepreg, K_Plate semi-preg, coilable K-Rod and K-Chip molding compound. The material is described as a thermoplastic resin with epoxy components bonded to the end of it. 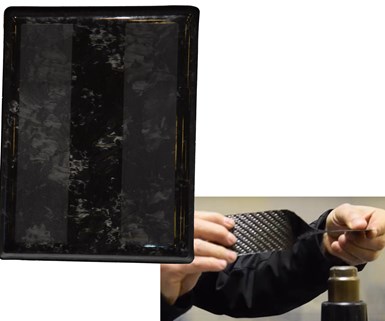 Unlike traditional thermoplastics, K_Series resins have a relatively low viscosity, more like thermosets, enabling even resin distribution on a variety of fibers and compatibility with epoxy fiber sizing. K_Series products are also easily painted and adhesively bonded, like a thermoset. Like typical thermoplastics, however, K_Series products enable reforming of finished parts, and are said to be tough and energy-absorbing.

Applications include an overhead line equipment (OHLE) system for rail, plus demonstrators and other projects in automotive, construction. The company has said that key areas of further development include developments for noise reduction, and recyclability. 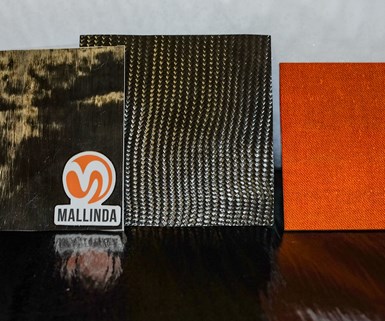 Under development since 2014, Mallinda’s (Denver, Colo., U.S.) vitrimer resins are the industrialization of a type of reprocessable thermosets first named in 2011. Through the company’s work developing highly stable but reconfigurable, imine-linked carbon-nitrogen double bond networks within the resin’s chemistry, vitrimers can be reshaped and reprocessed when heated like a thermoplastic, and can be cured and crosslinked like a thermoset. Due to the reversible chemistry inherent to vitrimers, the cured materials also can be depolymerized and separated from fiber under mild conditions.

With other iterations under development, Mallinda’s first two vitrimer variations are Vitrimax T60 for sporting goods and Vitrimax T130 to serve as a drop-in replacement for standard structural epoxies in automotive, wind and industrial structures.

L&L Products (Romeo, Mich., U.S.) has formulated a reformable, epoxy-based adhesive film called T-Link Film, said to exhibit both the adhesion benefits of an epoxy with the recyclability, repairability and formability of an engineering thermoplastic. T-Link Film is said to be high-performing compared to traditional thermoplastic adhesive films, and also serves as a solution to replace messy and time-consuming liquid epoxies. The product, a recent rebranding of L&L’s L-F610 thermoplastic epoxy adhesive film, is available as a film, resin or coated yarn.

Finally, the main aim of the 11-member European Airpoxy consortium, led by CIDETEC (San Sebastián, Spain), is to reduce the production and maintenance costs of composite parts in the aerospace market through the development of thermoformable, repairable, bondable, epoxy-based composites.

Called Airpoxy, the new product family is developed from what the consortium called “smart epoxy,” thermoset resins that exhibit reversible, dynamic chemical bonds that keep the fiber impregnation capabilities and stability of thermosets while adding the reprocessability, repairability and recyclability of thermoplastics. Currently, aircraft panel demonstrators using Airpoxy serve to prove out the technology.