The news from this annual Parisian in-gathering of composites professionals is heavily weighted toward automotive lightweighting.
#pekk #outofautoclave #airbus

Carbon Grossbauteile GmbH (CGB, Wallerstein, Germany) couldn’t get its massive filament-wound carbon fiber-reinforced pipe into the show hall, but the behemoth did stop passersby in the parking lot. CGB was featured in the March issue of HPC for its work developing large structures like this for use in the massive Mae West civic sculpture in Munich, Germany’s Effnerplatz (see "Mae West ...." under "Editor's Picks"). Source: HPC: Photographer: Jeff Sloan

A view inside the CGB pipe section. Source: CGB

The McLaren MP4-12C supercar appeared on the JEC show floor with and without body panels, the latter giving visitors a look at the car’s carbon fiber “tub” that forms the passenger compartment. It’s one in a long line of recently developed vehicles that uses carbon fiber in the passenger cell (see “F1-inspired MonoCell ...." under "Editor's Picks"). Source: HPC; Photographer: Jeff Sloan

Cutting Dynamics (Avon, Ohio) won an Innovation Award at JEC for its development of this carbon fiber/PPS seat back. Carbon fiber unidirectional tape was slit and then braided by A&P Technology (Cincinnati, Ohio) to create the rim structure (photo below) around the edges of the seat. Source: HPC; Photographer: Jeff Sloan

A sample of the braid used in the seat back rim. Source: HPC; Photographer: Jeff Sloan

SGL Automotive Carbon Fibers (Wiesbaden, Germany) brought to the show the carbon fiber composite passenger cell for the all-electric, four-door BMW i3. Carbon fiber for the cell will be made in the U.S. Source: HPC; Photographer: Jeff Sloan

Skies outside were gray but the atmosphere inside was all sunshine at the 2011 JEC Composites Show in Paris. Held March 29-31 at the Paris Expo in Porte de Versailles, the event’s upbeat buzz reflected the current upward trend in the composites industry. You wouldn’t be blamed if, while wandering the aisles of the show this year, you thought yourself not at a composites event, but a car show, and a high-end one at that. Among the many autos on display was a carbon-fiber intensive Lamborghini Aventador hypercar, carefully encased in a customized black-fabric booth. It was clear, judging by the number of cars, passenger cells and car parts — almost all molded of carbon fiber — that many exhibitors believe the future of the composites community is riding on four wheels.

Carbon fiber manufacturer SGL Group (Wiesbaden, Germany), made a splash at this show a year ago when it announced that its joint venture with BMW Group, SGL Automotive Carbon Fibers,  was going to build a new carbon fiber manufacturing plant in Moses Lake, Wash., to produce material for the passenger cell of the forthcoming all-electric BMW i3 (dubbed Megacity Vehicle at the time). Since then, much has changed. Officials at this year’s show confirmed that the new facility in Washington State is on schedule for completion this summer, to be followed in the third quarter by commissioning of the lines and delivery of the first of the carbon fiber. The plant’s capacity will be 3,000 metric tonnes (6.613 million lb) per year of 50K standard-modulus carbon fiber.

The Moses Lake facility will be fed by polyacrylonitrile (PAN) precursor from a Mitsubishi/SGL joint venture in Japan. Finished 50K tow will leave Moses Lake and arrive in Wackersdorf, Germany, where it will be woven into noncrimp fabrics, which then will travel to Landshut, Germany, for stacking, preforming, stamping, resin transfer molding (RTM) and machining for the passenger cell.

Andreas Wüllner, managing director of SGL Automotive Carbon Fibers, says SGL already is testing the weaving technology that will produce the noncrimp fabrics in Wackersdorf and is confident that the car, due on market in 2013, will remain on schedule. Indeed, SGL displayed in its booth a completed passenger cell (see photo, p. 49) for the four-door BMW i3. It featured blue and white tape over the cell’s joints to hide some of the technology behind the cell. Look for similar technology in the just-announced hybrid-electric BMW i8, also due out in 2013. In fact, Wüllner says BMW is so committed to the use of carbon fiber composites in its cars that SGL Automotive Carbon Fibers is already planning to expand the Moses Lake plant. BMW, in fact, had a recruitment booth at the show, to hire composites engineers.

Another attention-getting auto was the new, yet to be released Audi RS3, with carbon fiber fenders that are resin transfer molded by Sora Composites (Change, France), a first for Audi, says Sora. Fabrication details weren’t available, but Sora says the thin, complex parts require care in the preforming process to achieve Audi’s exacting standards.

Aerospace out of the autoclave

Also in abundance were materials, equipment, tooling and process concepts, many of which included automation, for producing composites faster and more efficiently — and out of the autoclave. One of the winners of the JEC Innovation Awards competition was an aircraft seat back, developed by A&P Technology (Cincinnati, Ohio), Ticona (Florence, Ky.), TenCate Advanced Composites (Morgan Hill, Calif.) and processor Cutting Dynamics Inc. (CDI, Avon, Ohio). More than 18 months in development, it features a compression-molded pan that uses AS4 carbon fiber unidirectional tape from Hexcel (Dublin, Calif.). The tape is prepregged by TenCate, using Ticona’s Fortron PPS thermoplastic resin.

The rim of the seat, which provides structural support against torsional forces (consider the abuse a typical aircraft seat back endures), also comprises AS4 carbon fiber prepregged by TenCate, then split by A&P into strips 0.1875 inch/4.8 mm wide and braided into a biaxial tubular shape to provide noncrimping conformity around the edge of the seat back. The rim likely will be welded to the pan, says Mike Favarolo, technical marketing manager at Ticona, although CDI also is considering an adhesive. CDI molds the seat back in a cycle described as “minutes” long and expects to produce several thousand for a major aircraft manufacturer.

Another impressive out-of-autoclave concept was a composite aircraft door designed and produced by Latécoère (Toulouse, France) together with its European partners. The large and complex part with integral stiffening frames was made with a 3-D preform stitched together with a new 1K (two-ply) carbon fiber sewing thread developed by Schappe Techniques (Blyes, France). The part materials, which included dry carbon and fiberglass and metallic mesh for lightning strike, were layed up in a complex multipart mold and then resin-infused, with assembly time reduced by 10 to 15 percent thanks to the preform and fewer steps required. The finished part is reportedly 10 to 15 percent lighter compared to current door designs.

Innovation award finalist Techni-modul Engineering (Coudes, France) showed a new concept for tools capable of out-of-autoclave, high-rate production of composites. The patented concept involves a thin skin, which can be either metallic or composite, integrally heated via fluid channels. The fluid can be oil-, water- or metal-based. The company claims a very fast rate of tool heating and a high ultimate temperature (around 400°C/752°F).Because the tool is much less massive than a conventional counterpart, it can be handled and moved more easily and less power is consumed during part cure. The target market is out-of-autoclave processing and resin transfer molding. Equally buzz-worthy was the winner of the Equipment Category Innovation Award, a metal-surfaced composite tool produced by partners Advanced Composites Group Ltd. (ACG, Heanor, Derbyshire, U.K.) and Integran (Toronto, Ontario, Canada). The tool has a nanocrystalline, ferromagnetic cladding or tool face over a carbon fiber composite tool base, to take advantage of the best aspects of metallic tooling with the reduced weight and lower thermal mass of composite tooling.

Although the aerospace industry has been abuzz about the viability of and potential savings from the use of out-of-autoclave (OOA) resins for structural aircraft applications, another buzz was raised  about the potential for reinforced thermoplastics in post-787 and post-A350 XWB primary structure (see HPC editor Jeff Sloan's comments on this developement in "Will TPCs reshape coomerical aircraft?" under "Editor's Picks," at top right). In 2010, thermoplastic composites turned up on business jets, including the Gulfstream G650, in its vertical tail rudder (an award winner at JEC 2010). This year, Fokker Aerostructures B.V. (Hoogeveen, The Netherlands) displayed the bottom skin of the G650’s horizontal tail section. It’s currently molded of carbon fiber/epoxy, but the Fokker version is a demonstrator fabricated from carbon fiber/PEKK (see “Thermoplastic composites: Primary structure?” under "Editor's Picks"). Arnt Offringa, director R&D at Fokker, says his company will mold the top half of the tail section, bond the halves together, and conduct structural testing to determine the material’s suitability for the application. If successful, Offringa says the company hopes to see the technology on a future business jet. And if that’s successful, then perhaps it will fly on a commercial aircraft.

Offringa also reports that the same Airbus effort is molding the lower half of an A320 forward fuselage section, using a similar carbon fiber/thermoplastic combination, stiffened by a rib system Fokker has developed. It will be years, says Offringa, before the industry knows where this research will lead, but agreed that it is “very interesting.”

New product and business announcements were everywhere, including Think Composites’ (Palo Alto, Calif. and Antony, France) press conference to announce its partnership with Chomarat Group (Le Cheylard, France). Think Composites’ principal Steven Tsai of Stanford University described the design concept of an unbalanced laminate, using only two ply angles, which can offer unexpected design benefits in a composite laminate, such as greater toughness and bend/twist coupling to control deflection. Porcher will produce the unusual reinforcement in dry form, or will work with prepregger partners to produce prepreg forms of the material, which Tsai believes can ultimately lead to better composite performance and less material waste in processing.

Assembly Guidance Systems Inc. (Chelmsford, Mass.) demonstrated its new ProjectorVision laser projection system designed to prevent foreign object debris from ruining a part. The machine vision system automatically detects any debris in the mold during the laser-guided layup process that does not match the program, and locks the system to prevent further progress until the debris is removed.

Editor’s note: HPC will follow up these brief highlights with a thoroughgoing review of what was new and on review at JEC Paris in the upcoming July issue.

Over at the nearby 32nd SAMPE Europe International Conference, held March 28-29 at the Hotel Mercure, the newly reformatted program of plenary and parallel technical sessions attracted more than 200 attendees, beginning with a welcome networking session on the evening of March 27. SAMPE Europe president Bruno Beral of Airbus (Toulouse, France) opened the proceedings. He expressed the solidarity of all members with their Japanese colleagues after the recent earthquake and tsunami tragedy in Japan and introduced the keynote speaker, Dr. Takashi Ishikawa, executive director of the Aerospace Research and Development Directorate at the Japan Aerospace Exploration Agency (JAXA). After a moment of silence for the victims of the Japanese disaster, Dr. Ishikawa gave an overview of composites R&D at JAXA. Included in this was a summary of technology developed at JAXA which has been transferred to the Mitsubishi Regional Jet (MRJ).  Although the first-generation 90-passenger MRJ will have an aluminum wing, the second-generation 90- to 100-passenger version is set to take advantage of CFRP technology developed at JAXA, using epoxy VaRTM processing. The 6m/19.5-ft prototype produced mechanical properties approaching those of standard aerospace prepreg technology without using an autoclave. Also included in the research was an integrally fabricated fuselage/stringer section, using a hybrid of prepreg and VARTM technology. These developments were presented in detail during a session later in the program. 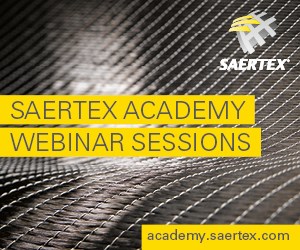