It used to be enough that AFP systems could precisely and quickly place and cut multiple tows to build complex aerostructures. Now, fabricators need those tows steered, and the tighter the radius, the better.
#nextgenaerospace #f-35 #airbus

Automated fiber placement (AFP) is well known as a technology enabler for the fabrication of large, complex commercial aerostructures, including fuselage skins, stringers, frames, wing spars and more. Though AFP was always intended for more complex 3D structures, these were traditionally achieved by applying relatively straight courses over 3D tools and mandrels, along with some curved-path fiber steering.

The complexity envisioned for structures in next-generation aircraft, however, are a step change, engendered in part by the use of more complex design software capabilities that enable more prescribed and precise placement of directional reinforcements. Of course, increased design complexity requires increased process versatility, including in the use of AFP. Such versatility will include the ability to not just steer tows along more complex paths, but to do so with increasing quality and speed, enabling more efficient, and thus, even lighter structures, digitally optimized to handle increasingly complex loads. This is not lost on AFP equipment suppliers, which are working on several technologies to advance tow steering capabilities. But, as seen in the discussion below, that path may not be so straightforward.

In this two-part series on tow steering, CW will first assess the current state of the art in steering technology. In Part 2, in the February 2021 issue, we will assess emerging steering technologies and how they might factor into future aerostructures manufacturing.

AFP is well-suited for tow steering because tow widths in this process are relatively narrow, at either 0.125, 0.25 or 0.5 inches (3.2, 6.4, 12.7 millimeters). And if this were the only criteria for steering, it would have been in much wider use sooner. But good steering also requires precise and focused application of heat, followed immediately by excellent compaction. Lack of either can result in wrinkled or buckled tows, which might require repair or replacement.

Todd Rudberg, senior engineer at AFP specialist Electroimpact (Mukilteo, Wash., U.S.), says traditional AFP systems have relied on use of infrared (IR) heat applied only to the substrate just prior to tow placement and compaction. And for straight courses, this has been sufficient. But to steer those tows, he argues, more focused temperature and better process control is required. This, he says, is made possible by laser heating, which is highly focused and very well controlled.

On Electroimpact AFP systems, each tow has its own laser, and that laser applies heat not just to the substrate, but to the tow as well. And it does so with a level of accuracy unmatched by any other heating technology, Rudberg argues: “Laser-based temperature delivery is so precise. It provides so much more control over the temperature you’re actually using.” 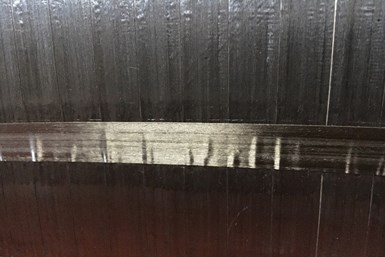 Moreover, because temperature and compaction are the dominant process variables, laydown speed often takes a back seat. As a result, Rudberg reports, placement of steered tows is almost assuredly slower than placement of straight tows.

“Steering tows really does depend on a lot of factors,” Czaja says. “On top of that, some applications have a certain density of defects that are allowable. Part of our job is to quantify the steering performance of certain materials by temperature, hardware and application. Automated inspection is very helpful to do this.”

“The dependent factor is not the machine, but the material. That is, ultimately, what determines steerability.”

Robert Harper, director business development at Fives Composites (Hebron, Ky., U.S.), says the AFP machines Fives has in the field doing any steering use IR heating only, but that the company is assessing laser-based heating for future systems. That said, Harper argues that an IR-heated AFP system is more than adequate to meet current tow-steering requirements: “The dependent factor is not the machine, but the material. That is, ultimately, what determines steerability.” Further, he says a Fives AFP system can perform tow steering at full speed — about 2,000 inches/minute (50 meters/minute) — assuming the material is compatible and radii are relatively moderate (more on this below). 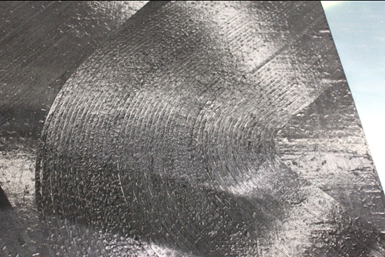 Steered tows placed with a Coriolis automated fiber placement (AFP) system. Tow width, fiber type and resin type all dictiate how well a tow can follow a given radius. The biggest risk in tow steering is creating wrinkles and buckles that may exceed design allowables for the part. Photo Credit: Coriolis

Denis Cartié, composites project manager at Coriolis (Queven, France), says the heating technologies used at Coriolis are IR for thermoset materials, laser heating for thermoplastics and the Heraeus (Cambridge, U.K.) humm3 flash lamp for dry fibers. For thermosets, a majority of the heat is applied to the substrate; for thermoplastics, the substrate and the tows being placed are heated. All of this, he says, is generally sufficient for a vast majority of steering requirements. Still, Cartié says, Coriolis is considering localized laser heating technology for steering, but has not yet seen significant demand in the market for the technology, particularly given the cost and laser safety requirements.

What is possible, what is necessary

Regardless of the technology that enables robust tow steering, it is clear that the steering capabilities of most AFP systems, at least as viewed by those suppliers, today far exceed current demand. Future applications, however, are almost certain to push this technology further﻿.

Rudberg notes, for example, that an Electroimpact AFP system with 240°F laser heating can steer a 0.5-inch tow of Toray (Tokyo, Japan) T3900 carbon fiber/epoxy prepreg to a radius of about 560 millimeters (22 inches). A 0.25-inch tow of the same material at the same temperature, he says, can be steered to a radius of 280 millimeters (11 inches). However, he also notes customers are not yet that demanding; the tightest radius Electroimpact has been asked to steer is 910 millimeters (36 inches), and a “typical” requested radius is 1.3 meters (50 inches). Moreover, he says, the specifications Electroimpact has worked with so far typically limit process temperature to 180°F, which renders Electroimpact’s 240°F capabilities moot for the time being.

Ingersoll’s Czaja reports similar capabilities for the technology he has helped develop. In an R&D environment, he says, Ingersoll’s AFP system has steered 0.5-inch tows to a radius of 150 millimeters, with a “tolerance for some wrinkles.” In a production environment, however, radii range from 1.0 to 1.5 meters (40-60 inches). Further, says Czaja, although “speed is not the most important process parameter,” as radii exceed 3 meters (118 inches), tow laydown rates increase and start to approach the speed of straight-course deposition. 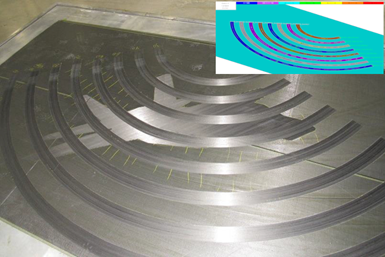 However, Harper adds, “The shorter the arc length, the more likely you will be able to achieve a smaller radius.” Fives is no stranger to steering; its systems have been used for years in high-profile composites production, including the composite skins for the F-35 fighter jet. Typically, though, such systems have depended on steering 0.125-inch tows, which are the most easily steered.

Cartié says the steering capability of Coriolis’ AFP systems cannot be easily defined given the material and process variables involved, but these are the nominal radii possible: 0.125-inch tow, 750 millimeters (29.5 inches); 0.25-inch tow, 1.5 meters (59 inches); 0.5-inch tow, 3 meters (118 inches). That said, Cartié reports that Coriolis has conducted tow-steering trials that have demonstrated a very small radius — 100 millimeters (4 inches) at the neutral fiber. But is this what the customer wants?

“The customer’s dream is to meet the smallest radii at perfect layup quality with the lowest cost material at the highest speed,” Cartié says. “But they know it always depends on part geometry and their acceptance of knockdown factors [wrinkles, folds] and their specific material. This is to say that design, stress and process engineers must collaborate intensively specific to the part design.”

Steering for the sake of steering?

Czaja and Harper, although clearly positive about the potential for increased use of tow-steering, caution that, like any composites manufacturing process, it should not be used for the sake of being used. Czaja notes that return on investment for steering comes at a cost, and the challenge it solves may be solvable more cost-effectively with other materials or processes. “When we talk about steering, we tend to talk about feasibility,” he says. “The overall cost picture must be considered.”

Harper says Fives has developed software that simulates the AFP manufacturing process and allows the company to assess materials and process feasibility in a digital environment, prior to production. For example, says Harper, small features in a design might necessitate application of 0.125-inch tows for steering, but that must be considered against tow widths used on the rest of the part. “We try to point our customers to the right tow width for the application,” he says.

Cartié﻿, at Coriolis, says demand for tow steering is following an AFP maturation curve that is tied to the complexity of the structures being fabricated: “Automation is a solution to answer high production rates of composite parts. The complexity of the part to be manufactured using AFP is increasing. In general, the more complex the part, the more the curvature of the part increases and therefore the smaller the steering radius.”

He notes, for example, the doorframe for the Airbus A350, which has steering requirements tied to the radius of the door opening as well as the curvature of the fuselage. “The radius is linked directly with the diameter of the fuselage,” he notes. “A similar part for a single-aisle plane will exhibit a smaller steering radius.”

Next month, in Part 2, CW will review recent research on designing structures with optimized tow-steering, emerging continuous tow shearing, efforts to develop wing structures that maximize the benefits of tow steering to help increase strength and reduce weight, and the convergence of AFP and additive manufacturing.