Composites industry veteran and marketing advisor Gary Sharpless discusses his more than 35 years in the industry and his current advisory roles with Concordia Fibers and Boston Materials.
#medical #outofautoclave #marketing

Composites industry veteran and marketing advisor Gary Sharpless discusses his more than 35 years in the industry and his current advisory roles with Concordia Fibers and Boston Materials. 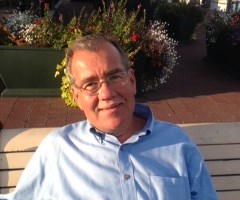 In this episode of CWTalks, CW editor-in-chief Jeff Sloan interviews Gary Sharpless, a composites industry veteran who is currently serving on the board of directors for Concordia Fibers (Coventry, R.I., U.S.) and Boston Materials Inc. (Bedford, Mass., U.S.).

You can listen to the full CW Talks interview above or visit:

Excerpt from the episode

CW: Let’s talk about your decision to sell Fiber Innovations and how you moved into consulting.

GS: I started [Fiber Innovations] in 1984, with the intention of building a company and selling it. So, at the age of 53, I retired. But the thing that I realized was that I really missed the relationships that I developed. So after about a year … I was approached by some old colleagues and they asked me if I would do some consulting and be on the board of directors of a couple of companies.

CW: And some of those companies you've worked with, I think are pretty well known, like Maverick and Renegade, Nammo and Concordia Fibers, and then most recently, Boston Materials, which is a new startup. Were you drawn particularly to these companies or did they come to you? How do you decide who to be involved with now?

GS: Well, most of them I had previous relationships with and in general these are small growing entrepreneurial companies that I feel at home with based on my experience running a similar type of company. Not that these companies were the same as Fiber Innovations, but kind of have similar cultures. As the president of a small company, you get involved in the technical aspects, the business aspects and the sales aspects. So, with most of these companies I get involved in the technical and the sales aspects of the business because, in most cases, problems can be solved with good innovative technical solutions or by generating revenue, [and that’s] sort of what I do. In the case of Maverick and Renegade, I mainly worked with the founding partners kind of reassuring them that it was okay to sell the company after growing it — taking care of employees and finally letting the reins go. When you start a company and you grow it for 25 years, there is a real emotional part to that. You have to be prepared for that. I worked with the folks at Renegade to kind of help them through some of the some of that.  Both Maverick and Renegade have worked hard, taking risks and reinvesting back into the business. They should be proud of what they’ve built, and should feel good about handing it over to another company to grow it even bigger. But as we all know, once you sell the car, you can’t drive it anymore. So you have to be prepared to do that.

With a company like Nammo Composite Solutions, that’s probably the most similar company [I’ve worked with] to Fiber Innovations because they’re a contract manufacturer, but they have a lot more capabilities than we had at Fiber Innovations because they offer more or less end to end composite manufacturing capabilities: composite molding and machining all the way through painting and finishing and testing. The thing that I admire most about them and other small companies is being agile and competitive to meet the demands of contract manufacturers because you’re always looking at the best value. And that means the best technical approach, the best product at the most fair and reasonable price.

One of the things that that I’ve helped them with is [while] they’ve traditionally been more of an autoclave and film up winding company, now they’re into more out-of-autoclave. They have capabilities in terms of triaxial braiding, resin transfer molding and VARTM. So it’s a company that I’ve helped to be a little bit more diverse in terms of the more traditional composite processing.

I’m also on the board of directors at Concordia Fibers, a 100-year-old industrial textile company that has constantly reinvented themselves. They’re a Rhode Island company, but they also have plants in France and Mexico. They have two main businesses. They were originally a company that made twisting of polyester fibers, nylon fiber, more traditional and industrial textiles. And they’ve transitioned into composites. In the thermoset area, they’re the exclusive supplier of twisted carbon fiber for the Leap Engine program, one of the fastest selling engine programs in aviation history. And in thermoplastics, they’ve developed a comingling process where they can combine carbon fiber and a thermoplastic fiber to make a broad range of thermoplastic fibers to produce what they call a flexible composite prepreg. And that’s what I've been kind of involved in with them since 2012. They’re always looking for strategic partners and opportunities to expand their composites business. They have a long history of innovation. They actually went into the medical device business at one point in time. They built a medical device company around textile fibers and processing and then sold that to another company. So it’s interesting to see a hundred-year-old company constantly reinvent themselves and go into the direction of composites as a higher value added opportunity, as compared to a startup company like Boston Materials.

CW: So, let’s talk a bit about Boston Materials and what they do.

GS: I’m also on the board of directors with Boston Materials. I've been with them for about a year and a half. They came out with a new product called Super Comp [that] is basically a through-the-thickness “z” fiber reinforcement that is used to with traditional woven or unidirectional carbon reinforcement and enhances the interlaminar, dampening and heat dissipation of composite properties in either a dry fabric or prepreg.

CW: And they use the they use milled carbon fiber correct that they orient for that z-direction, right?

GS: Yeah. So without getting into the, the proprietary nature [of what they do], they’re taking milled carbon fiber, which is actually recycled carbon fiber, taking a traditional woven fabric, for example a 3k, 12 x 12, 200 grams per square meter fabric, they are able to align the milled fibers through the thickness.

If you hold up the fabric up to the light, you’ll see these little windows there. So these milled fibers basically go through the thickness and then you could take that dry fabric and run it through prepreg line and prepreg it. Now when you stack those layers together to make a composite laminate, you have fibers that are actually penetrating through the thickness from one layer to the next. So in a sense, it gives you kind of like a mechanical lock between the layers. It doesn’t have anything to do with toughened resin systems or nanotechnology, it’s really more on a macro level than a micro level.

One of the things that’s kind of important here is that you’re taking a recycled carbon fiber — milled carbon fiber, which is lower cost and you’re displacing some of that volume of more expensive material, so that there’s a potential for cost reduction here compared to more traditional prepreg or dry fiber reinforcement. What they found in terms of doing testing is that there’s no knockdown of in-plane properties, but there’s an increase in interlaminar properties. Because you have these fibers through the thickness, you’re able to conduct the heat through the thickness of a composite — so good heat dissipation and also good dampening properties.

When I first came across Boston Materials, it was interesting because I went to a ASM meeting in Cambridge and I met these two young young guys and I told him the story about Fiber Innovations. As I was kind of looking at these two young fellas and was like, “Wait a minute, that was me 30 years ago.” And so, part of the enjoyment of working with these companies is that I don’t have the sleepless nights that I had when I had my own company, but I still have the excitement of working with really talented, hard working people that are really interested in kind of changing the world a little bit. And I believe that they’re on a path to success. For most of my career, I’ve been chasing this holy grail of “how do you make composites better” and I’m pretty confident that this is going to make a difference. They’ve raised about 4 million in funding from Clean Energy Ventures, and one of their strategic partners is Sabic. Right now, they have a 12 inch capability to do their Super Comp. They’ll be expanding out to 60 inches wide first quarter of 2020. So pretty exciting stuff going on.

CW: You’ve talked you talked a little bit about the culture of small companies and you’ve worked for small and large companies and so I imagine that must have given you some perspective on the advantages and disadvantages of both. I’m wondering what you’ve observed over the years about large and small firms?

GS: I think one word describes what I think small companies have as an advantage and  that’s agility. They can make decisions fast and implement on a dime and get technology and innovation out in time to solve a problem or even just to change the way things used to be done. I think the big differences that that you know, when these larger companies move, sometimes they create earthquakes. Especially when it comes to changes in technology or materials. The things that I see as an example might be moving from traditional autoclave processing to automated tape layup, and then out of autoclave. Some of the major changes in in the way the major part of the industry makes composites — these technology moves are really made by some of the larger companies and are moving from thermosets to thermoplastics. I think I see that transition right now. And with the larger companies it may take longer for them to move, but once they move, it’s a big shift in technology and materials. The smaller companies maybe can't react to this because of lack of capital, but they’re also the companies that do initiate a lot of that innovation initially. I see a place for both small and large companies in this industry. Without that mix, I think you would have an unhealthy industry. And when you look at some of the small companies that I’m involved in, especially my company, Fiber Innovations, we grew to a size where it was part of a larger entity. I think that that's just the way the world works.