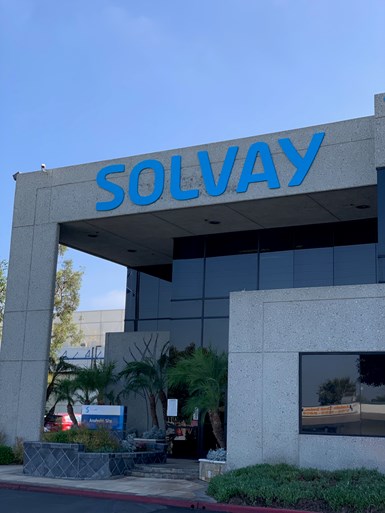 Solvay Composite Materials (Alpharetta, Ga., U.S.) reported this week that it is expanding its thermoplastic composites manufacturing capacity with a new production line at its facility in Anaheim, which the company says underscores its commitment to meeting strong demand growth from aerospace customers for this high-performance material and Solvay’s proprietary technology.

After the commissioning of this new tape line, followed by upgrades to existing lines, Solvay will have multiplied its qualified thermoplastic tape production capacity by four since 2016. The expansions aim to not only improve output, but also quality, consistency and industrial reliability, the company says.

Solvay has at its Anaheim facility two thermoplastic tape production lines making 12-inch wide tapes in 24/7 operations, using the company’s hot-melt-based APC system. APC technology can process most of the company’s thermoplastic resins, including PEEK, PEKK and PAEK. The new line, the third in the facility, is designed to improve the efficiency and throughput of the APC process and substantially increase overall capacity. Solvay will begin producing tapes on the new line in the next 30 days, and then use that material for qualification. Full production of qualified material is expected to begin in mid-2020.

In the meantime, Solvay officials say they will retrofit the two original lines with newer technologies, thereby providing a further boost in overall capacity. Fabrizio Ponte, head of the company’s thermoplastic composites platform, says Solvay is seeing strong demand from aerospace customers, which prompted the expansion: “We are committed to APC and thermoplastics. We believe in it and the market believes in it.”

“This significant expansion in a short time, coupled with our unrelenting attention to overall quality and productivity improvement, illustrates our engagement to serve our customers best. Their strong demand shows they value how our materials reduce manufacturing time and cost, helping to raise the build-rate of aircraft,” says Augusto Di Donfrancesco, member of Solvay’s Executive Committee. “Solvay is in a leading position to drive breakthroughs in materials innovation and accompany our customers in their growth requirements.”

Solvay announced in May the creation of its first horizontal strategic platform to accelerate the development of thermoplastics composites as part of its strategy to leverage its portfolio and expertise in specialty polymers and carbon fiber composites. These lightweighting materials help reduce emissions of aircraft and vehicles as they replace metal parts and facilitate their design and integration. Other applications include pipes in the oil and gas industry as they are a strong and cost-effective alternative to existing steel solutions.