The Artura is a plug-in hybrid that uses the new McLaren Carbon Lightweight Architecture.

“From the very beginning of the project, designing and engineering the Artura has been all about challenging ourselves to innovate, pushing and pushing to achieve everything we knew a next-generation, high-performance hybrid McLaren supercar had to be. As a result, the Artura is all-new; the carbon fiber monocoque, electrical architecture and the body and interior are new. So too is the V6 engine, the transmission — which also integrates a new type of electric motor for the industry— as well as the rear suspension concept and our first-ever electronic differential.”--Geoff Grose, chief engineer, McLaren Artura.

The newly developed McLaren Artura hybrid can go from 0 to 60 in three seconds flat and has an electronically limited top speed of 205 miles per hour (mph). It also has a dry weight of 3,075 pounds and is 3,305 pounds with fluids.

Further, the Artura is based on a new platform, called the McLaren Carbon Lightweight Architecture (MCLA). The company has been building nothing but vehicles with carbon fiber chassis since 1993, so MCLA is a notable development borne of years of experience. It is a fully McLaren execution, as it was designed at and is being built in the McLaren Composites Technology Centre (MCTC) in Rotherdam, U.K.

A primary reason for the development of the MCLA is because adding the hybrid components — the motor and the battery pack, in particular — added mass to the vehicle. The 70-kilowatt (kW) motor weighs 33.9 pounds and the 7.4-kW lithium-ion battery pack weighs 193.6 pounds. So the engineering team went at all aspects of the vehicle to reduce mass.

For example, they developed a new 3-liter, 577-horsepower (hp), twin-turbo aluminum V6 engine that weighs just 352 pounds, or 50 pounds less than the V8 that is found in other McLaren sportscars. (The e-motor, incidentally, which brings the total system output to 671 hp, is integrated into the bell housing of the transmission to minimize space requirements.)

The engineering team even reduced the weight of the cabling in the electrical system by 10%, which is notable because the electrical architecture is considered one of the three elements of the MCLA. The other two are the carbon fiber monocoque and the chassis and suspension structures.

Features of the carbon fiber monocoque include:

The third element of the MCLA is the chassis and the suspension.

On both the front and rear of the carbon fiber structure are aluminum subframes. These serve the function of absorbing crash energy. They are designed so that they can be replaced both easily and cost-effectively (relatively speaking). 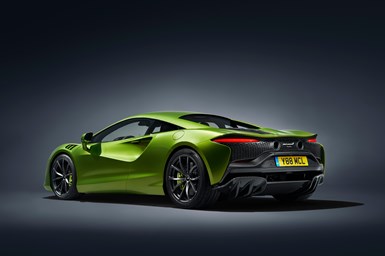 “Every drop of McLaren’s experience and expertise has been poured into the Artura.”--Mike Flewitt, CEO, McLaren Automotive. McLaren hasn’t made a car without a composite monocoque since 1993.

In the front of the vehicle, the upper wishbone is attached directly to the carbon fiber monocoque and the lower wishbone to the aluminum subframe. In the back, the rear subframe is bolted to the monocoque and the rear suspension features a multi-link design that allows the reduction of 5.3 pounds of unsprung weight on each side of the car.

Jamie Corstorphine, director of product strategy, McLaren Automotive, says, “The new McLaren Carbon Lightweight Architecture is quite literally at the core of the super-lightweight engineering philosophy that is inherent throughout the Artura. We developed this all-new, high-performance hybrid supercar with all of our learnings from decades of working with advanced composite and other lightweight materials, using world-first processes and techniques to deliver weight savings that offset heavier hybrid powertrains, ensuring greater energy efficiency and maintaining the outstanding agility and dynamic performance our customers expect.”