NASA plans to send the Mars Helicopter as a technology demonstrator along with the Mars 2020 rover which is planned for launch in July 2020.
#space 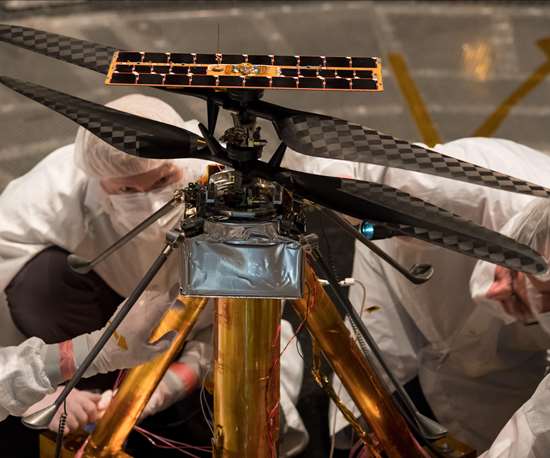 The helicopter is constructed of more than 1,500 individual pieces of carbon fiber, flight-grade aluminum, silicon, copper, foil and foam and weighs no more than 4 pounds (1.8 kilograms). While tests have been conducted with an engineering model, this flight test was conducted using the actual vehicle that will be sent to Mars.

“Gearing up for that first flight on Mars, we have logged over 75 minutes of flying time with an engineering model, which was a close approximation of our helicopter,” says MiMi Aung, project manager for the Mars Helicopter at JPL. “But this recent test of the flight model was the real deal. This is our helicopter bound for Mars.”

In order to simulate the thin atmosphere of Mars, the helicopter was tested in JPL’s Space Simulator, a 25-foot-wide vacuum chamber. Nitrogen, oxygen and other gases were removed from the air inside the chamber and replaced with carbon dioxide, the chief ingredient of Mars’ atmosphere.

“Getting our helicopter into an extremely thin atmosphere is only part of the challenge,” says Teddy Tzanetos, test conductor for the Mars Helicopter at JPL. “To truly simulate flying on Mars we have to take away two-thirds of Earth’s gravity.”

A gravity offload system – a motorized lanyard attached to the top of the helicopter – was used to provide an uninterrupted tug equivalent to two-thirds of Earth’s gravity.

NASA plans to send the Mars Helicopter as a technology demonstrator along with the Mars 2020 rover which is planned for launch in July 2020.