Thermwood’s vertical layer printing turns AM on its side

Appears in Print as: 'Vertical Layer Printing Turns AM on Its Side' <p>Jason Susnjara, vice president of marketing at Thermwood, explains how this portion of a Boeing tool was 3D printed using Vertical Layer Printing (VLP) on a print table oriented perpendicular to the floor.&nbsp;</p> 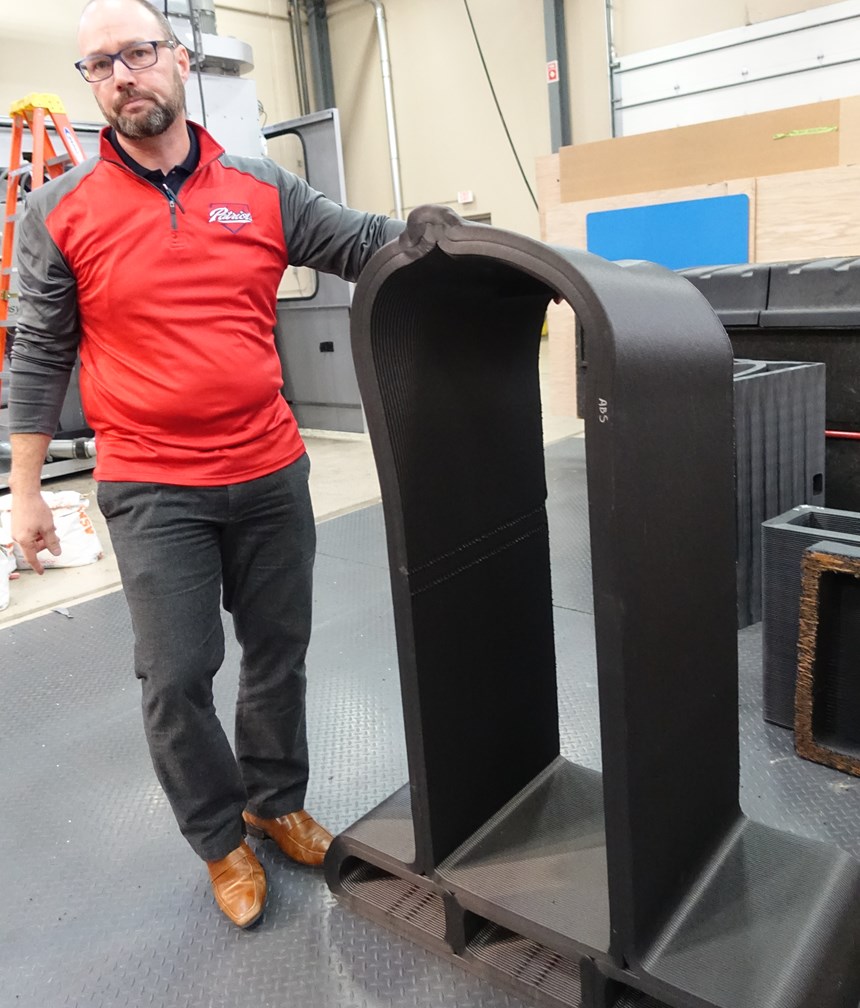 The full view of this portion of the 3D printed Boeing tool. VLP is now available as an option for Thermwood&rsquo;s Large Scale Additive Manufacturing (LSAM) machines.&nbsp; 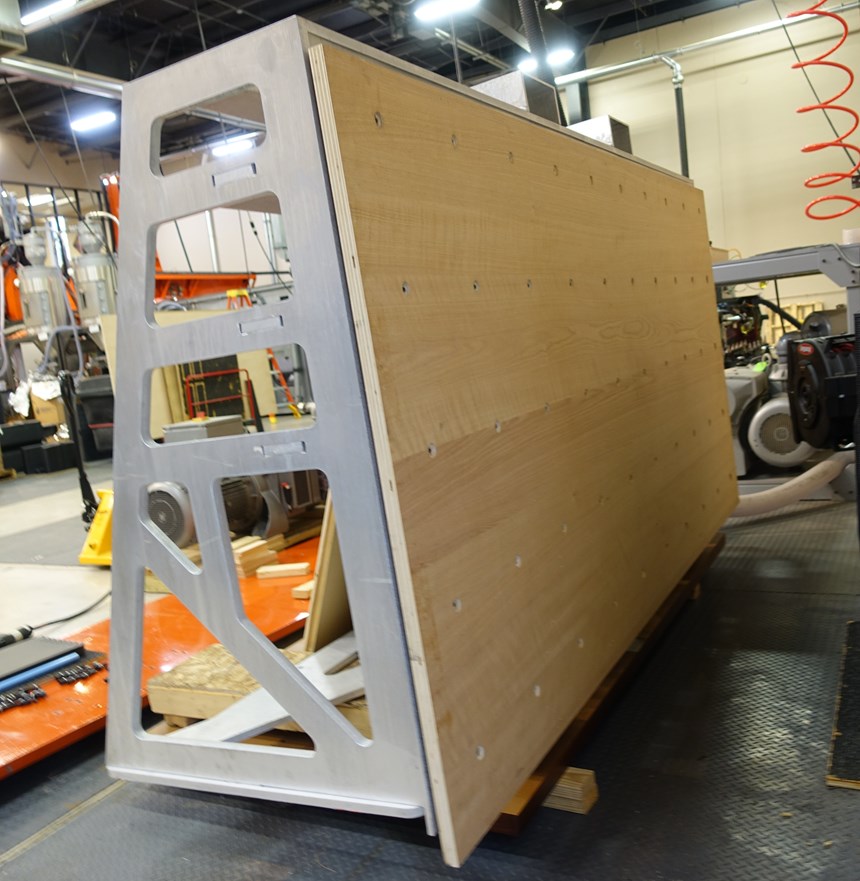 <p>VLP is now available as an option for new and existing LSAM machines. Part of the equipment necessary is the vertical build table shown here. Parts are printed on beadboard affixed to this table.</p> 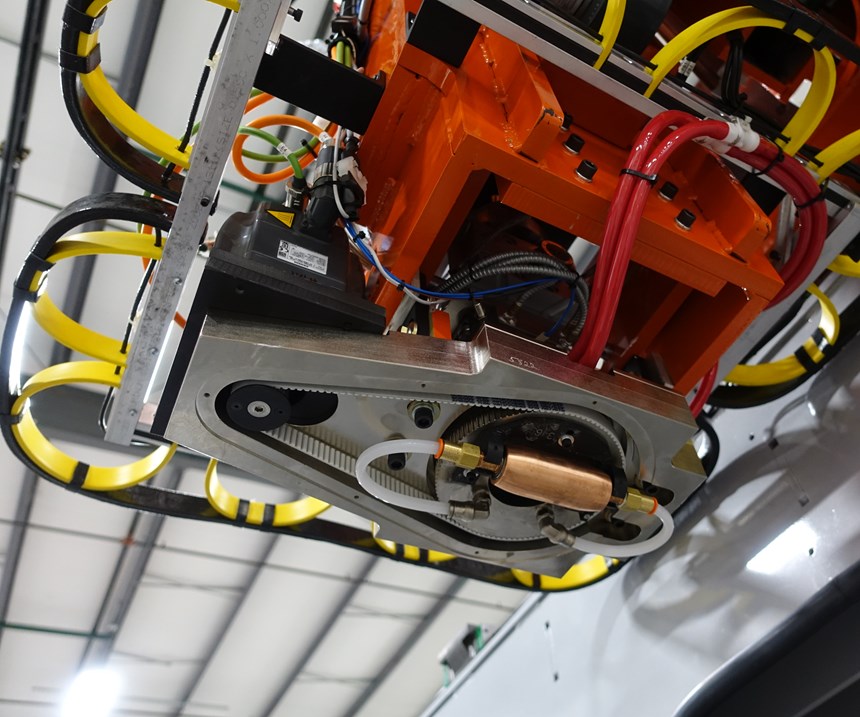 <p>One of the standard LSAM features that makes VLP possible is a compression&nbsp;wheel, the copper roller seen here. As the print head lays down a bead, the wheel compresses it to ensure good layer adhesion and prevent sagging.</p> 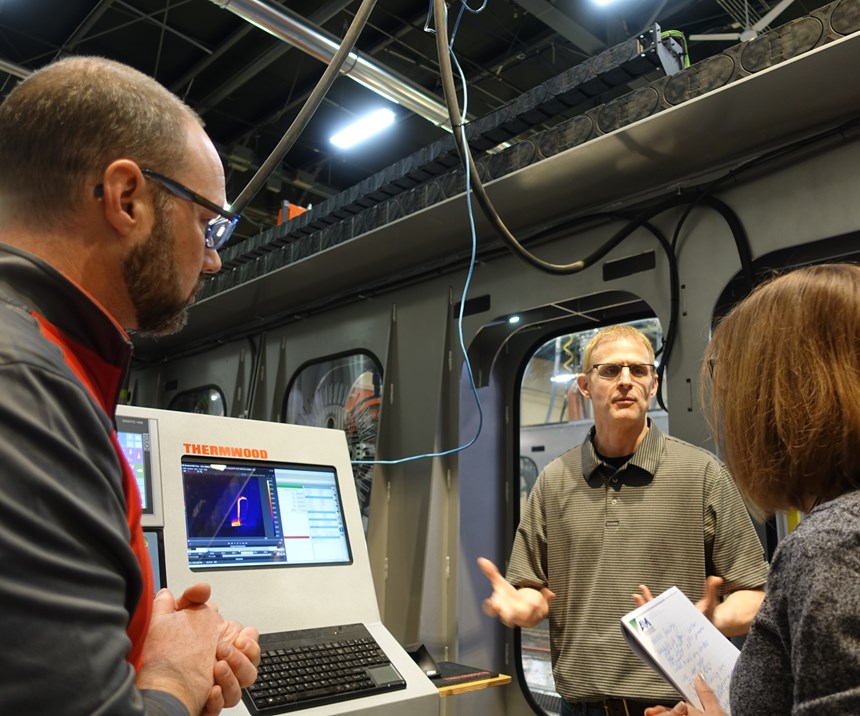 <p>Scott Vaal, LSAM product manager, explains how thermal imaging enables the printer to lay down the next layer of material at precisely the right time for the best layer adhesion. The monitor in the background shows thermal camera footage from the build of the Boeing tool.&nbsp;</p> <p>At the time of my visit, Thermwood&rsquo;s R&amp;D LSAM was set up for machining to finish this 18-foot-long helicopter blade mold (though one of the stainless steel belts used for VLP was still in place). The mold was printed with the LSAM&rsquo;s conventional horizontal orientation in about 3 hours. CW senior editor Scott Francis later&nbsp;<a href="https://www.facebook.com/watch/?v=1264197117069100">spotted the finished mold on display at JEC</a>.</p> 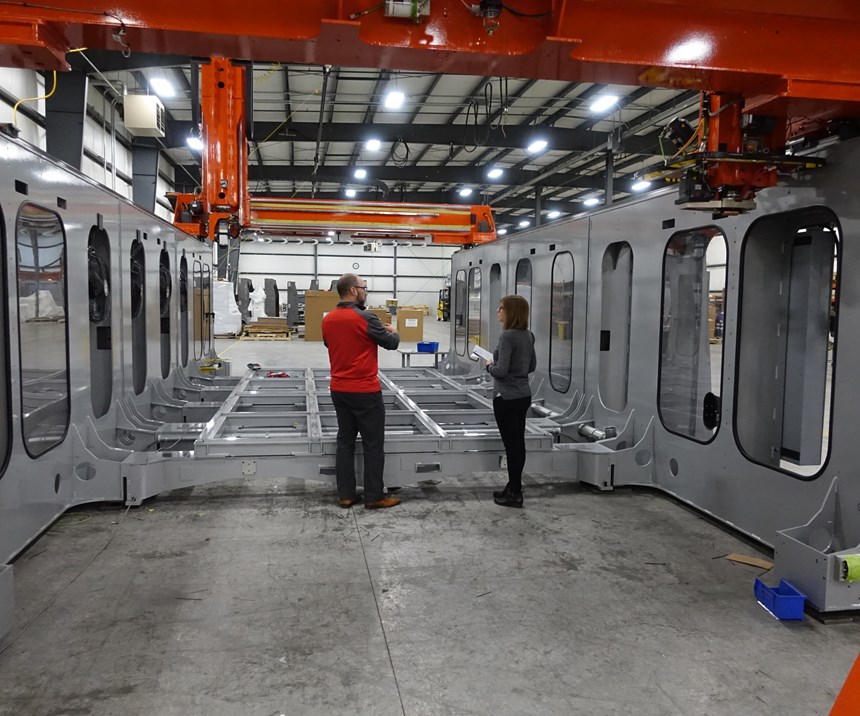 <p>Susnjara and I stand inside an unfinished LSAM machine in the company&rsquo;s Dale, Indiana, assembly facility. LSAM printer envelopes can range from 20 to 100 feet in 10-foot increments; VLP offers more opportunities for using this space effectively.</p>

Vertical Layer Printing (VLP) at first sounds counterintuitive. This new 3D printing strategy developed by Thermwood makes use of the company’s Large Scale Additive Manufacturing (LSAM) system, but instead of putting down layers of material that are parallel to the floor, VLP literally turns the process on its side. A print head oriented at a right angle to the extruder deposits material in layers perpendicular to the floor, onto a vertical print bed.

The main benefit to printing this way is size. The LSAM’s print envelope is 10 feet wide and can be 20 to 100 feet long, but is only 5 feet high. That limits the size of parts that can be manufactured in one piece with a horizontal print bed, says Jason Susnjara, vice president of marketing.

A recent project provides an example. Thermwood 3D-printed a mold for a boat hull at its Dale, Indiana, facility using the LSAM with the standard horizontal layer orientation. “We didn’t have vertical at that time, so everything was done horizontally, in six different pieces,” Susnjara says. After printing, each part was machined individually, then assembled with its fellows and finished. “It still only took 10 days to print, machine and add all those pieces together. However, with VLP we can print that boat hull form in one piece continuously, and probably save half the time.” This strategy would have avoided the assembly step and thanks to the machining gantry option available on the LSAM, it even could have been possible to finish machine the form without moving it. (Learn more about Thermwood’s recent boat hull project in “TAHOE Boats' T16 uses 3D printed tooling from Thermwood.”)

VLP is now an option for the LSAM. The same system can print in both orientations with just a few changes in hardware and software. Customers who want Vertical Layer Printing capability receive the VLP print head and a vertically oriented build plate. As the head prints the layers moving only in the Y and Z axes, the motor-driven build platform slides the part backward layer by layer in X on two Teflon-coated stainless steel belts.

What makes the process counterintuitive, of course, is gravity. Layers printed perpendicular to the floor have the potential to sag and bring the print out of tolerance. Thermwood has several tools to counter this danger:

One early success for Vertical Layer Printing was a large R&D tool produced for Boeing which was in progress at the time of my visit. The final tool measuring 12 feet long was printed in a single piece from ABS with a 20 percent carbon fiber fill. While the tool’s size did not necessarily preclude horizontal-oriented printing, its mostly hollow construction might have been difficult to print in this direction. VLP saved material and increased confidence by making it possible to print the tool without additional bracing or supports to hold up its top curve.

See VLP in action in this video.

This story originally appeared on AdditiveManufacturing.Media