Appears in Print as: 'A giant leap in rocket weight savings' 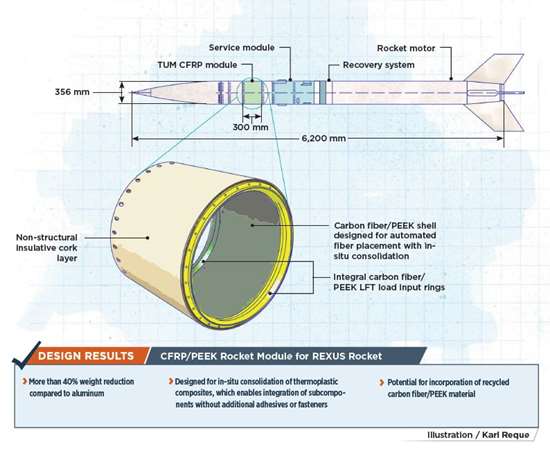 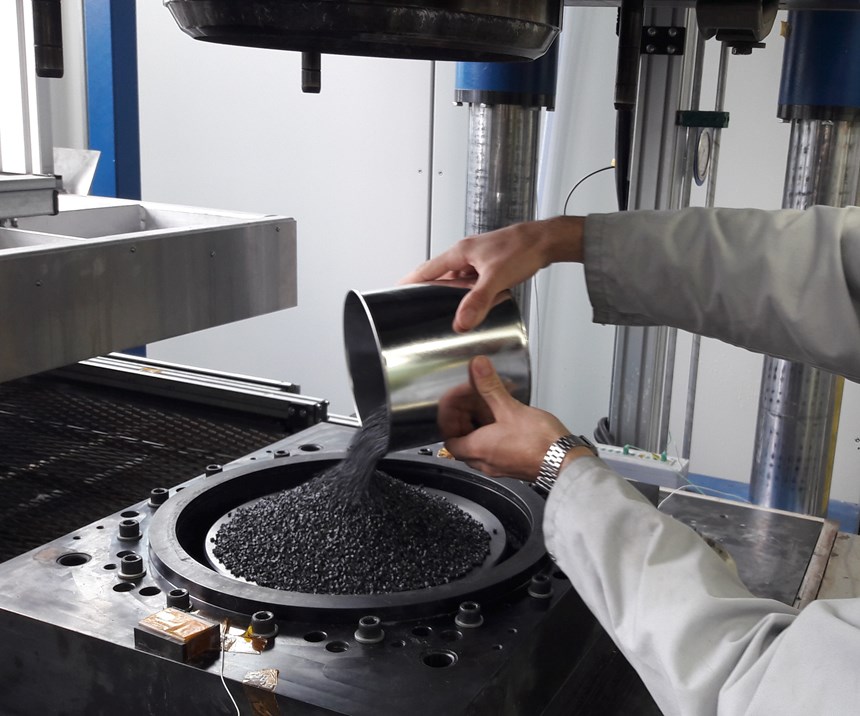 <p><strong>Press-formed load input rings</strong></p> <p>Load input rings, which are used to bolt-connect the CFRP module to adjacent modules of the REXUS rocket, are produced by filling a tool cavity with long-fiber thermoplastic (LFT) carbon fiber/PEEK granules, then compacting the material into the heated ring-shaped mold.</p> <p>Source |&nbsp;Technical University of Munich</p> 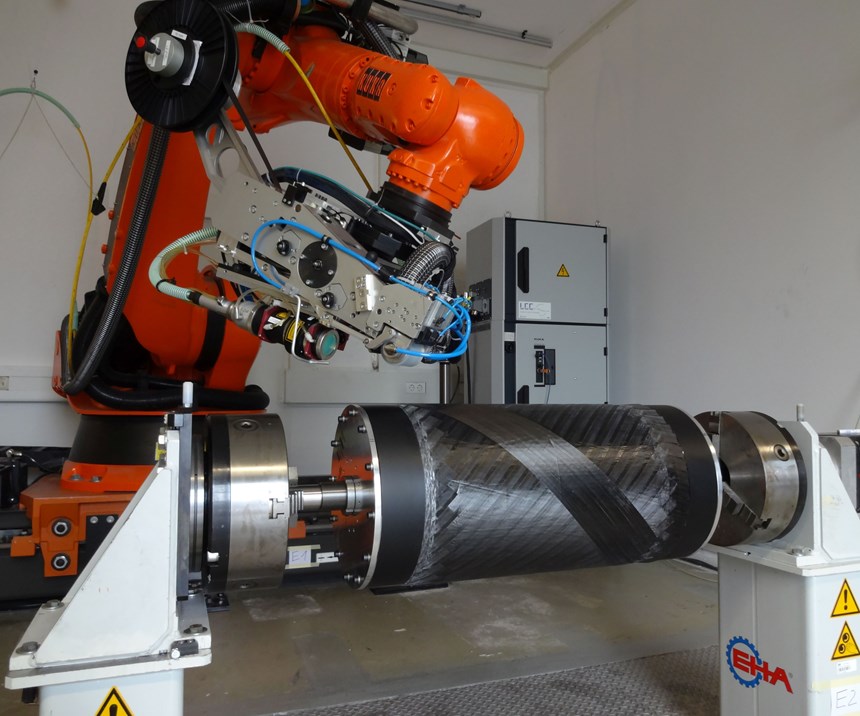 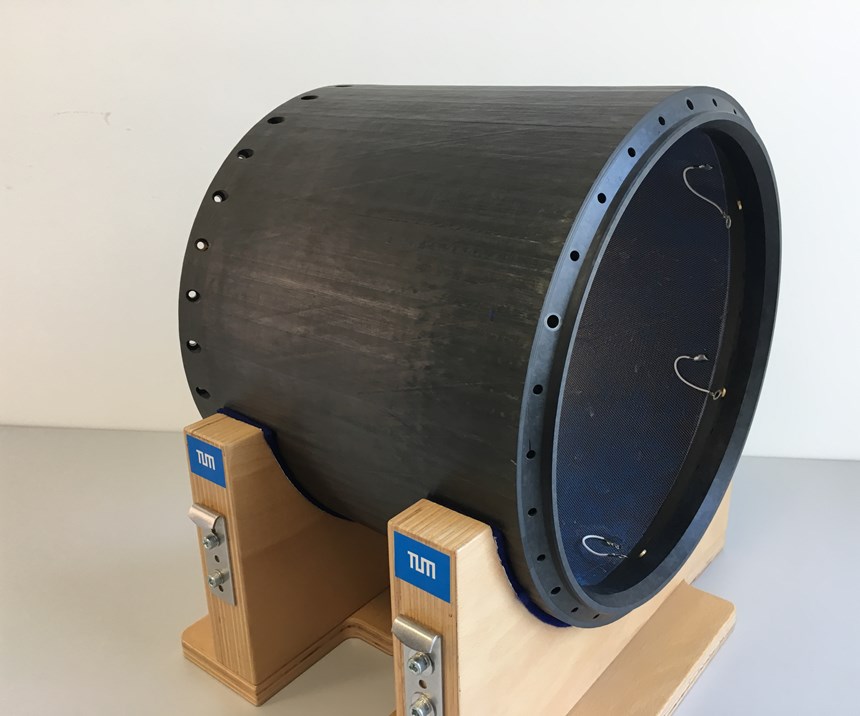 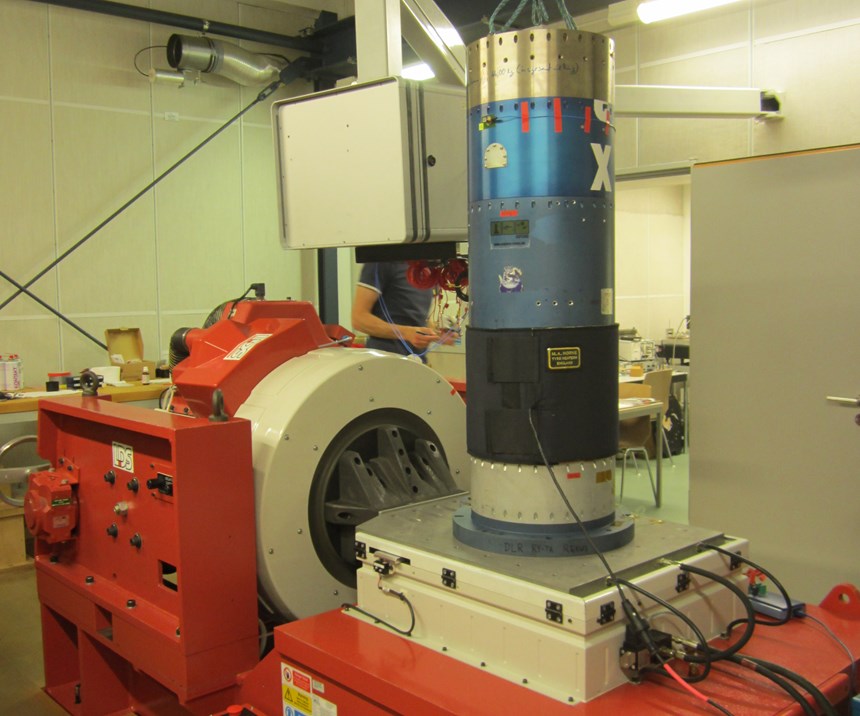 <p><strong>Full scale testing</strong></p> <p>As part of flight qualification, the CFRP module is connected to adjoining modules and subjected to vibration testing at the University of Bremen (Germany) Center of Applied Space Technology and Microgravity (ZARM). Testing includes a dummy load and heating to service temperature.</p> <p>Source | Technical University of Munich</p> 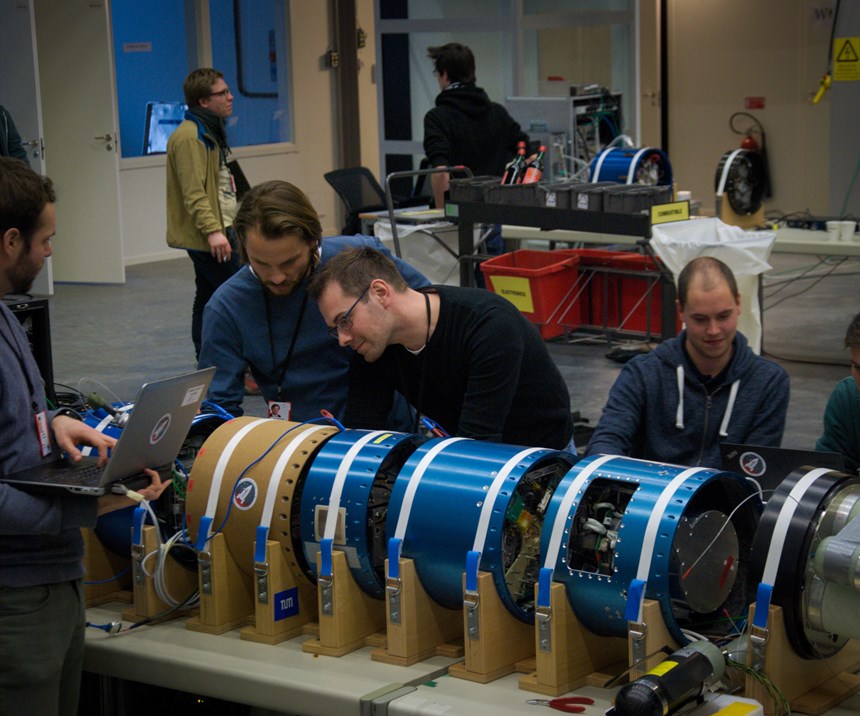 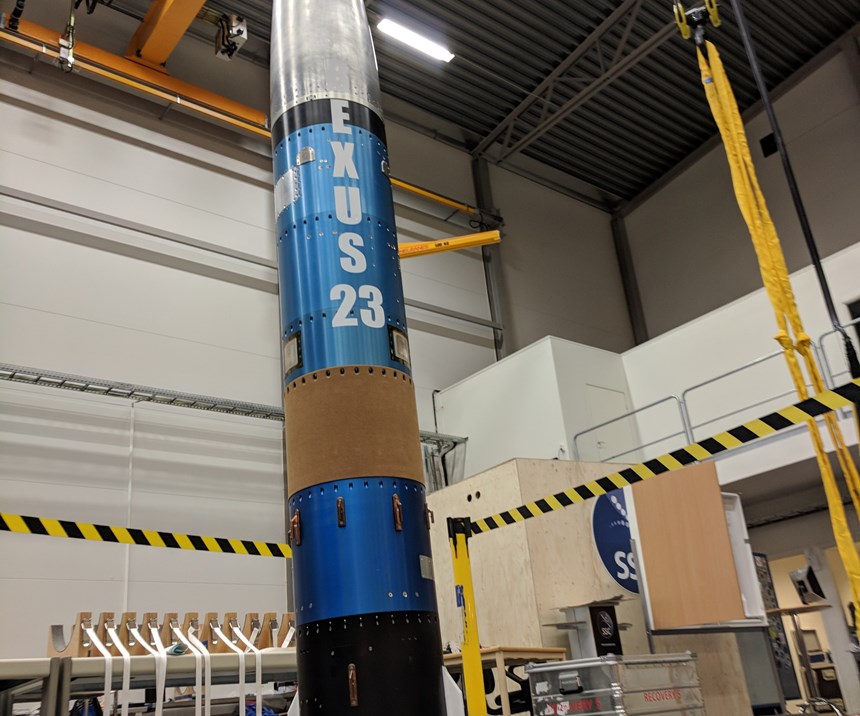 “Ambitious” may be an understated characterization when it comes to the space industry’s goals for reducing the cost of space transport. A case in point, the US National Atmospheric and Space Administration (NASA, Washington, DC) reports that one of its aims is to reduce the cost of putting a payload into Earth orbit from $10,000/lb today to hundreds of dollars per pound within 25 years, and tens of dollars per pound within 40 years. Across the Atlantic, the goals are also lofty: the European Space Agency (ESA, Paris, France), for example, has stated its intent for the Ariane 6 rocket to match or beat the payload cost per kilogram of the  SpaceX (Hawthorne, CA, US) Falcon 9, estimated to be less than $7,500/kg for geosynchronous transfer orbit (where most satellites reside) and less than $3,000/kg for low Earth orbit.

It should come as no surprise, then, that rocket structural lightweighting is being pursued by numerous space industry organizations, or that composite materials are showcased in such efforts. Success in these pursuits depends initially on finding ways to achieve lightweighting goals while complying with standards already established for baseline metal components, including part geometry and thermo-mechanical properties.

TUM’s rocket module comprises one section of the REXUS research rocket, which is funded by the German Aerospace Center (DLR, Cologne, Germany), the Swedish National Space Agency (SNSA, Stockholm, Sweden) and the ESA, and funds university projects across Europe. REXUS research rockets are launched twice annually to enable university experimentation during sub-orbital flight. They fly to a maximum height of 80-100 km, with a maximum vertical speed of about 1,200 m/s and maximum acceleration of about 20G. The baseline structure of the scientific payload modules is aluminum, with an outside diameter of 356 mm and length of 300 mm. The TUM CFRP module was designed for REXUS Mission 23, for which the current expected launch date is early 2019.

While the REXUS program typically supports university science projects conducted inside the scientific payload modules, the TUM project is unique in that the experiment’s subject is the composite module itself — its design, manufacture, performance and qualification for flight. “Our primary goal was to replace aluminum with CFRP, which is not the typical mission,” Engelhardt emphasizes.

The module consists of a cylindrical CFRP shell – 356 mm in diameter and 300 mm long, like the original aluminum – and two thermoplastic composite radial-axial (radax) load input rings, one male and one female, which provide bolt connection to adjacent modules. The CFRP design was created to meet specific geometric and thermo-mechanical property requirements, necessitated because the module must perform according to standards consistent with the rest of the rocket. Because of this, the module’s geometry was pre-defined, including a requirement to match the wall thickness of the aluminum version. The module also had to achieve the same stiffness as the aluminum version. The least flexible module features are the geometry and mechanical properties of the module’s load input rings, which must maintain position and integrity relative to the modules to which they are attached.

The TUM module is made from a carbon fiber/polyetheretherketone (PEEK) material, selected for its high mechanical and thermal performance, as well as its higher specific strength and stiffness compared to aluminum. In the final assembly, a cork layer is adhesively bonded to the shell to provide thermal insulation. In addition to the expected weight reduction of 30%, TUM also pursued an efficient manufacturing approach. The initial design includes a manufacturing concept in which the radax rings are press-formed from long-fiber thermoplastic (LFT) granules, demolded and prepared for integration; then the full module is laid up using thermoplastic automated fiber placement with in-situ consolidation (TP-AFP).

Of course, with the module itself serving as the primary “experiment,” TUM had an opportunity to load needed equipment for secondary experiments inside the module. The team chose to measure temperatures internal to the composite structure using imbedded fiber optic sensors (FOS). Engelhardt explains that FOS were chosen over thermocouples because their thin diameter and fibrous shape result in minimal reduction of the CFRP shell’s mechanical performance, and because optical signals are not prone to disturbance in the electromagnetic fields that the rocket encounters. Four FOS — specifically, capsuled fiber Bragg grating (FBG) sensors — are imbedded during TP-AFP manufacturing at different positions and depths within the laminate, and are later connected to a measurement system inside the module that operates the sensors. The measurement system collects and manages the data, and provides a downlink to the ground station.

To manufacture the module, the TUM team first forms the rings. Victrex plc (Lancashire, UK) PEEK 450CA30 LFT granules (containing carbon fiber in lengths of 2-3 mm) are press-formed into ring-shaped molds. The press is heated to 390˚C, compacted at increasing force levels (50-200 kN), then cooled and demolded at 100˚C.

The shell is made from Teijin (Tokyo, Japan) Tenax unidirectional carbon fiber/PEEK prepreg tape on TP-AFP equipment from AFPT GmbH (Doerth, Germany). The TP-AFP process enables in-situ consolidation of the thermoplastic tape at room temperature onto the CFRP load input rings. No autoclave consolidation is required, and the consolidation onto the previously manufactured rings eliminates the need for additional mechanical fasteners or adhesives. Engelhardt is pleased with the outcome of this two-step process. “This is a new combination,” he notes. “It is always a challenge performing in-situ consolidation with thermoplastic tape, but here, we successfully placed the tape on thick, monolithic rings.”

Engelhardt is also pleased with FOS integration, which was a new technical challenge. TUM had experience employing FOS in neat resin, but not in a composite laminate, and not using a thermoplastic AFP process. The team met this challenge and achieved flight-qualification performance.

Finally the module incorporates a separate bulkhead, which serves as a mounting plate for measurement devices. The bulkhead is thermoformed into its dome shape from a flat organosheet composed of the same carbon fiber/PEEK material as the module’s cylinder.

To reach flight qualification, TUM advanced this project through a complete testing, simulation and evaluation process. First, materials were characterized on the coupon level at room temperature and at a maximum service temperature of 135˚C. Subcomponent testing helped to ensure acceptable interlaminar shear performance of the interface between rings and shell, as well as adequate pullout strength of the fasteners used to connect the rocket’s modules. Data from initial testing provided input for simulation and design.

Finite element structural analysis helped the team to optimize the laminate layup. The result for the cylinder is a 34-layer symmetric layup (0˚/±15˚/±45˚/90˚). Following manufacture of the module, TUM conducted full-scale testing. To meet flight qualification loads, the module underwent vibration testing from 0-300 Hz at a frequency level of 0.083 g2/Hz. It also underwent a bending test, which demonstrated successful performance under the qualification load of 14 kNm.

The REXUS 23 mission was originally scheduled for March 2018, but was postponed due to difficulties during a previous REXUS mission. The launch is now scheduled for late February or early March 2019 from Kiruna, Sweden. The TUM team took advantage of the additional time by building a second module and testing/qualifying it this past autumn. In this new unit, instead of press-forming the load input rings, the team had the rings centrifugally casted by Elekem Ltd. (Lancashire, UK). The raw materials are the same, Engelhardt says, and the original module with the press-formed rings met all flight qualifications. But the new module advances ring performance from an acceptable level closer to an ideal level. “The press-forming process still needs some optimization,” Engelhardt says, “but it is very promising.”

A future goal, Engelhardt reports, and the reason TUM will return to press-forming in the future, is to make the rings from scrap material from the AFP process. “We will take cutouts and material left over on a roll, shred it, then use those small pieces to press-form the rings,” he explains. With limited data and experience related to this recycling process, TUM was unable to implement it within the time and budget restrictions of its Mission 23 work. The hope is to build and qualify the rings made from recycled material for a near-future space flight.

Once the mission is completed, TUM will use the FOS data to develop a more detailed picture of thermal loads on the module during flight. Such knowledge may lead to modifications of material choice as well as module design and dimensioning. “Thermal simulations were performed based on previous measurements, but we will soon have actual data,” Engelhardt points out. “We may find that we don’t have to have PEEK’s glass transition temperature (Tg) of 143˚C,” he illustrates. “A lower Tg means we could possibly use a cheaper polymer.”

Both a less expensive polymer and the use of recycled materials will contribute to the space industry’s overall goal of decreasing the cost of space transport by orders of magnitude. But the biggest contribution of TUM’s REXUS effort undoubtedly is the 40% weight reduction already achieved.