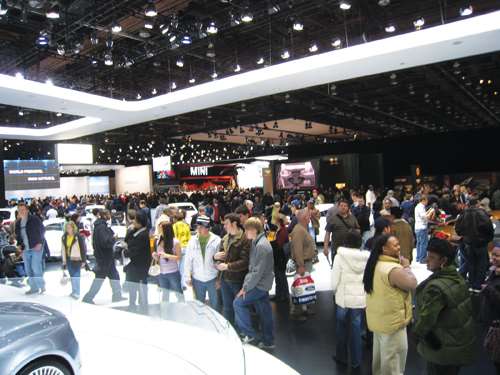 The ZAP Alias, a plug-in electric competing for the Automotive X PRIZE, was one of many electrics and hybrid-electrics on display in Detroit. Source: Dale Brosius

Definitely more upbeat than the 2009 outing, the 2010 North American International Auto Show, held Jan. 11-24 at the Cobo Conference/Exhibition Center in Detroit, Mich., welcomed 715,000 visitors, exceeding the 2009 tally by about 10 percent. From a composites perspective, there were very few new production-product launches for the 2010 and 2011 models on display. Most were carryover applications from 2009 models. There was, however, some modest new penetration of composites into functional applications under the hood and for interior components. With forecasts of between 11 and 12 million North American vehicle sales in 2010 (vs. 8.6 million in 2009), the industry appears to be on the upswing, and the show provided a good opportunity to discuss the outlook for composites with a number of the principal suppliers.

The show was heavily dominated by hybrid-electric- and plug-in-electric-powered vehicles, displayed by most manufacturers. Driven by U.S. corporate average fuel economy (CAFE) standards that will rise to an average 35.5 mpg for the 2016 model year, OEMs are looking at multiple routes to that goal, which is almost 10 mpg higher than current averages. The solution will require a combination of powertrain improvements and reductions in vehicle mass, say suppliers. “Weight is the new ‘cost,’” says Jeff Helms, global automotive manager for Ticona Engineering Polymers (Auburn Hills, Mich.). Noting that “powertrain improvements can only take fuel efficiency so far,” he emphasized that manufacturers need to trim 250 to 500 lb (113 to 227 kg), on average, to reach the goal.

A supplier of compounded long fiber-reinforced thermoplastics (LFRTs), Ticona sees high interest in replacing steel with LFRT in instrument panel substructures. And LFRTs with molded-in texture and color are combining structural and appearance properties in door panels and consoles, reducing the need for reinforcing brackets. Ticona also is working with suppliers to develop molded long-fiber polypropylene roof racks, and Helms expects these to become commercial within a few years.

A special section of the auto show, “Electric Avenue,” was dedicated to innovative vehicles, including many from automakers contending for the $10 million Progressive Automotive X PRIZE. Competing vehicles must be production-capable and meet or exceed 100-mpg energy equivalency. The winners will be announced in September 2010. David Dyke, director of advanced engineering, Magna Exteriors (Troy, Mich.), believes the show’s Electric Avenue concept is a very positive development. “These will be niche vehicles into the near future that need to achieve light weight while keeping tooling investment low, which is perfect for composites,” he contends.

One interesting X PRIZE competitor on display at the show, available now in limited volumes, is the T600 Tango, from Commuter Cars Corp. (Spokane, Wash.). The battery-powered two-seater has a race-car-like tubular-steel protective cage for safety, and is clad in carbon fiber/epoxy body panels. The vehicle reportedly performs at a very high level:  It can accelerate from 0 to 60 mph (0 to 100 kmh) in about four seconds and has a range of 200 miles/320 km on a single charge of its lithium-ion batteries, according to company president Rick Woodbury, who was on hand to answer questions.

Sheet molding compound (SMC) suppliers also are working hard to meet the challenge to reduce weight. “As an industry, we’re getting pretty close to having an acceptable low-density, Class-A SMC,” says Rob Seats, transportation manager for Ashland, LLC (Dublin, Ohio). Mike Dettre, business manager for closed mold resins at AOC Resins (Collierville, Tenn.) agrees. “High-strength steel is reaching its limit in terms of thickness,” he says, “so aluminum and low-density SMC are the main options for lightweight horizontal body panels.” Dettre credits the use of new, high-strength glass microspheres that can withstand sanding, calling them a key enabler in the effort to produce  lower-density Class-A SMCs.

Probir Guha, general manager, materials and R&D at molder Continental Structural Plastics (Troy, Mich.), thinks SMC makes more sense for body panels now than ever before. The goal is to get to an average density of 1.4 in a closure panel (such as a hood or decklid) through the use of current state-of-the-art 1.3 density inner panels, and outer panels in the range of 1.5 (vs. standard SMC at 1.8 to 1.9). This would make assembled SMC closures equal in weight to aluminum, with much lower tooling costs for the SMC, emphasizes Guha. He notes that production evaluations are currently underway and that parts could be commercialized within the next couple of years.

Under the hood, Jim Cederstrom, automotive market manager, Bulk Molding Compounds Inc. (West Chicago, Ill.), believes the forecast changes in powertrain configurations bode well for composites, especially for bulk molding compound (BMC) materials. He notes that opportunities are opening for BMC in pump housings and front engine covers because internal combustion engines are being downsized and the loads induced by pulleys are being reduced as front-end accessories make the transition from belt-drive technology to electric-powered operation. Because BMC materials already have proven their utility in high-voltage industrial applications, such as motors and encapsulation of coils and magnets, Cederstrom contends that they are ideal low-cost solutions for similar automotive components in plug-in and hybrid electric vehicles.

Although mass reduction is important, Magna Exteriors and Interiors VP of products and process development Tom Pilette cautions suppliers not to lose sight of the big picture. “While we’re excited about the opportunity to demonstrate and commercialize these new composite materials and concepts,” he explains, “we recognize the focus has to be on the final product and the product benefits to the end-consumer.” Fuel economy, infotainment options, cargo capacity and convenience all will be significant factors to consider as auto OEMs seek to provide value to car buyers.

Suppliers at the show were pleased to observe the OEM community getting back to the business of designing and building cars that incorporate new technologies, following a recessionary year that was marked by radical reshaping of automotive companies and their business models across the industry. Ticona’s Helms, for example, sees the OEMs pulling more of the design effort back in-house, reversing the previous outsourcing trend. “OEMs have a pretty good idea where they want to go,” says Helms. “Global platforms are back, customized for multiple regions.” And Magna’s Pilette is not only excited about these general trends but also points to the widening spectrum of automotive applications for composites. “We’re seeing an open-mindedness to look at innovative product use, which will help those companies that are technology oriented.”