The coronavirus pandemic promises to wreak havoc on the aerospace composites supply chain, but it’s not too soon to start thinking about how a post-pandemic commercial aerospace market will evolve.
#nextgenaerospace #787 #a350

The Boeing 787, and the Airbus A350 that followed, demonstrated, possibly once and for all, the strength of carbon fiber composites in primary aerostructures. As the aerospace industry moves through and past the coronavirus pandemic, the time will soon come when Boeing and Airbus must consider announcing single-aisle replacements. Composites use on those planes will be vital to the composites industry’s future. Source | CW

The last time I shook hands genially with someone was March 9, 2020. I was in Beverly Hills, Calif., U.S., attending the SpeedNews Aerospace Raw Materials and Manufacturers Supply Chain Conference. I introduced myself to the gentleman next to me, shook his hand (with some misgivings) and then settled in for the presentations.

It was, however, an unsettling time. The reality of the coronavirus was just starting to take hold globally that week. Italy and Spain were in trouble, and it was clear the U.S. might be on a similar path. The U.S. stock market, as we sat there that day, dropped more than 2,000 points.

The conference’s presenters, with one foot firmly planted in the past and the other stepping off of a tall and precipitous cliff, were in the unenviable position of trying to predict a future that seemed to change by the minute. Some presenters qualified their information, saying that they attempted to account for how the virus might affect passenger air travel and, by extension, the aerospace supply chain. Others didn’t bother and declared their presentations “COVID-free.” Most of the talk was about Boeing and the 737 MAX, and when it might return to service. One presenter did suggest that the coronavirus might cause a 9-10% drop in passenger air travel, “which would be unprecedented and devastating,” he said.

Now, just more than three months later, it’s hard not to look back on that day and not feel a little nostalgic for the innocence of the moment. If only the biggest challenge the aerospace supply chain faced was guessing the return to service for the 737 MAX. Or wondering how likely Airbus was to announce a new single-aisle aircraft. If only we had a 9% drop in passenger air travel, not 10 times that amount.

Since I returned from that conference, I think I’ve read, watched, listened to and otherwise consumed almost every report, webinar, podcast and column that’s been published about the state and ultimate fate of the commercial aerospace industry. I’ve talked to several suppliers of materials to the aerospace composites market.

The facts are not in dispute. Global passenger air travel dropped about 95% from mid-March to late May 2020. Airlines have laid off or furloughed thousands of employees. Demand for new commercial aircraft has almost completely vanished. Airbus is retrenching. Boeing is retrenching, on top of its just-completed 737 MAX-induced retrenching.

The questions, which have no answers, are unending: When will commercial air travel return to the 2019 peak? When will the flying public start flying again? How can flying be made safe? How will Airbus and Boeing restructure their production? How will the supply chains for Boeing and Airbus be affected? How will the aerospace composites supply chain be affected?

Most forecasters and observers generally agree that it will be 3-5 years before the commercial air travel industry starts to return to health. Aerospace consultancy The Teal Group predicts, hopefully, a return to peak travel in 2023. This assumes, of course, timely development of a coronavirus vaccine or COVID-19 treatment, or both. Because the bottom line is that the pandemic will dictate when and how the aerospace market returns.

Given all of this, it’s difficult to not be distressed for the aerospace supply chain — particularly the composites aerospace supply chain, which is comprised of so many Tier 3 and Tier 4 manufacturers who almost certainly lack the cash flow to weather a three-year downturn and production cuts of 30-50%. Further, the entire aerospace composites supply chain had been gearing up for at least one new program announcement (from Boeing) and possibly a second from Airbus. Now, all of the investment and energy organized for another ramp-up has been placed in limbo.

It appears Boeing and Airbus are doing what they can to soften the blow to their respective supply chains, but it’s difficult to expect that either company has the wherewithal financially or organizationally to keep the entire structure afloat. This is, after all, an unprecedented and dramatic downturn. How many organizations are staffed with leadership equipped to manage well the chaos that the coronavirus pandemic has wrought?

Some Darwinian analysts have argued that marketplace attrition, whenever and however it occurs, is a natural process that rightfully weeds out “weak” companies and rewards “strong” ones. While the virtue of such creative destruction is arguable, it is true that the pandemic’s casualties will include suppliers and fabricators in the aerospace composites supply chain. Presumably the slack that accumulates by the loss of such companies will be picked up by the survivors, but in an industry famous for its high technology specialization and propensity for innovation, we might be losing more than jobs and livelihoods. The risk the aerospace supply chain runs is that it weeds out some of the innovation and creativity it needs to evolve commercial aircraft into the next generation.

What then, do we make of the prospect of next-generation aircraft? From a market position and product perspective, it appears Airbus is better situated than Boeing to emerge from this downturn with many of the tools needed to help it get back to normal relatively quickly. The A220/A320 series of planes allows Airbus to meet a variety of market needs, ranging from regional transport with the A220, to international point-to-point travel with the new A321XLR. Boeing, still working to get the 737 MAX back in the air, simply lacks the same portfolio, particularly against the A321XLR. What Boeing does have is the 787, which, although a twin-aisle, remains the most efficient commercial aircraft in the world right now. 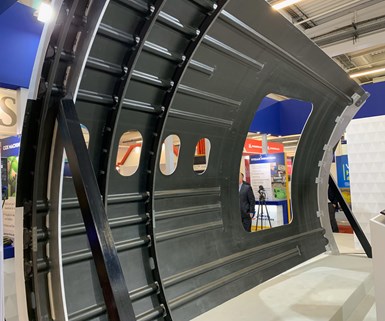 Tier 1 aerospace manufacturer Spirit AeroSystems introduced this composite fuselage demonstrator at the 2019 Paris Air Show. Designed for a single-aisle commercial aircraft, it features integrated stringers and can be affordably manufactured at a rate of 60-100 shipsets per month. Technologies like this are going to be necessary if Boeing or Airbus want to use composites in the fuselage of a new single-aisle aircraft. Source | CW

In short, the pandemic has made obvious Boeing’s relative weakness against Airbus, at least from a product perspective. Boeing most assuredly sees this and desires to regain advantage. Assuming the company, at the least, gets the 737 MAX back in the air soon and restarts production in earnest, and assuming the commercial air travel market starts to show some signs of life, there might actually be an opportunity for Boeing to think seriously about a post-pandemic future — and what kind of aircraft might be in it.

As difficult as it would be financially, Boeing might have no choice but to announce, in the next 12 or so months, either formally or informally, a new single-aisle aircraft program designed to carry the company into the second third of the 21st century. If that happens, the biggest question — from a composites perspective — is, how much composites material will it use? The answer is important, because any new single-aisle aircraft, whoever makes it, will be produced at a rate of 60-100 units per month. In short, that’s a lot of carbon fiber, which means a lot of composites, which means a lot of manufacturing. For a long time. My personal view is that a new single-aisle plane will almost certainly follow the 787 model — composites in the wings, fuselage and tail. Why? First, the efficiency conveyed by composites are unbeatable. Second, composites are more durable and reliable than aluminum. Third, because of one and two, airlines will demand all-composites structures. And the customer is always right.

If Boeing were to announce such a program, Airbus might be compelled to respond with a new single-aisle aircraft program of its own. And this would not be done capriciously. Airbus has, for the last several years, been laying the groundwork in the composites supply chain for the application of new materials and processes in large aerostructures manufacturing. Exhibit number one is the Wing of Tomorrow program, being conducted with Airbus, Spirit AeroSystems, Northrop Grumman, GKN Aerospace and the U.K.’s National Composites Centre (NCC), to assess the feasibility of a fully resin infused wing structure. Exhibit two is Europe’s Clean Sky 2 program’s Multifunctional Fuselage Demonstrator, which is assessing thermoplastic composites use in fuselage structures. Airbus had already signaled, when the economy was healthy, that it intended to ramp up A320 family aircraft production to 60-80 planes per month. A new single-aisle program would be in that same range, if not greater.

Am I right about all this? We shall see. But if I’m wrong, it will only be about the kinds of decisions Boeing and Airbus make over the next two years. The status quo — particularly for Boeing — is clearly not sustainable, thus serious changes and big decisions must be taken. Until that day, the aerospace composites supply chain will weather this storm as best it can, and look eagerly for a new, stable, healthy manufacturing environment.

Aviation Week (AW), on June 19, 2020, posted an Ask the Editors article in which AW France Bureau chief Thierry Dubois was asked about composites use in future aircraft. Click here to read his response.