Composites are key for Norsepower’s award-winning redesign of a century-old rotor sail for reducing carbon emissions on passenger and cargo ships.
#focusondesign

Reducing greenhouse gas emissions is a challenge each transportation sector is working to solve in various ways, and the marine shipping industry is no exception. Greenhouse gas emissions released by fuel-powered ships and other marine vessels has been on the rise in recent years, rising about 10% between 2012 and 2018, according to a 2020 study released by the International Maritime Organization (IMO, London, U.K.). The study also reports a 150% increase specifically in shipping-related methane emissions, and a 12% increase in black carbon emissions.

In 2012, Finnish entrepreneur Tuomas Riski realized that there are few options for reducing the emissions produced from burning fuel on ships and sought out a technology that could help. “I could see that we have a huge problem with global carbon emissions,” Riski says, “and I wanted to find a technology that we could make commercial, and that has potential to reduce carbon dioxide emissions substantially.”

Riski met and teamed up with Finnish naval architect Kai Levander, who was working on a design for mechanical sails that worked as an auxiliary, wind-based propulsion system for cargo ships. Riski and Levander reviewed several mechanical sail concepts, and ultimately decided to develop and commercialize a modernized version of a century-old technology: the Flettner rotor sail. To achieve this goal, the company Norsepower (Helsinki, Finland) was founded in 2012 with Riski as CEO.

Rotor sails for greener shipping. Composite rotor sails such as these on board the Maersk Pelican tanker vessel provide auxiliary power to reduce fuel consumption and accompanying CO2 emissions by 5-20%. Photo Credit: Norsepower

The rotating, cylindrical Flettner rotor sail is a mechanical sail that was first invented in the early 20th century by Finnish engineer Sigurd Savonius. It was then popularized (and named after) German aviation engineer Anton Flettner, who successfully sailed a prototype rotor ship across the Atlantic in 1926.

The Flettner rotor sail concept works by harnessing the Magnus effect (see image below). According to this principle, wind pushing against a rotating, rounded object, such as a cylindrical rotor sail, creates motion perpendicular to the flow of the wind. When wind is flowing in the correct direction — sideways across the deck of the ship, perpendicular to the direction the ship is traveling in — and hits against the rotor sail, the rotation causes air flow to accelerate on one side of the sail and to decelerate on the other side. The different wind speeds on each side of the sail create higher and lower pressures on either side, which creates lift force, or thrust, perpendicular to the direction of the wind flow. This thrust propels the ship forward.

The rotor sail is said to be 10 times more efficient than a conventional sail, creating more lift with a smaller surface area. However, like conventional sails, it depends on the direction of the wind, so is best used as an auxiliary propulsion system to supplement a typical fuel-powered vessel.

According to Riski, while Flettner proved the technology worked and that it was safe, effective and efficient, the timing wasn’t right for commercialization. In the 1920s, he says, “Fuel was cheap, and nobody was interested in reducing emissions.” Plus, he adds, the original metal rotor sails were heavy and expensive to manufacture. “We could solve all of those problems with composites. We saw that this is the technology which has the best potential to become the leading or market entrant mechanical sail for shipping vessels,” Riski says.

Since 2012, Norsepower has “step by step taken out a product to the market — designed it for the first pilot customers and, now, made it a commercial product,” Riski says.

The overall design of the rotor sail is a hollow, mast-like cylinder that is rotated by an internal shaft. One modern improvement on the original Flettner sails is that the internal steel shaft in Norsepower’s sail design is operated by an automated, push-button start and a modern electric motor system patented by Riski and Levander. This automation means fewer crew members are needed to operate the sail compared to boats with conventional sails.

The design of the exterior tube came with a number of design requirements, Riski says: a lightweight structure, good fatigue strength and manufacturability in high volumes at a reasonable cost. “You have to make a robust rotating part which is also lightweight and extremely well-balanced,” he says, noting that the original Flettner rotor sails had trouble with balance on board ship decks.

At Norsepower, composite and aluminum designs were evaluated, and the composite design was ultimately chosen, as it was about half the weight of the aluminum version, with higher fatigue strength and endurance. “When investigating different manufacturing technologies, we concluded that modern composites are the only way to make this kind of structure,” Riski says. “Without them, it would be very, very hard to make a working Flettner rotor. We can now make it a standardized, high-quality end product, and cut down the cost enough so that it has a business case with large volumes.” CAD and finite element analysis (FEM) software, from Ansys (Canonsburg, Pa., U.S.) among others, were used to complete and validate the design. 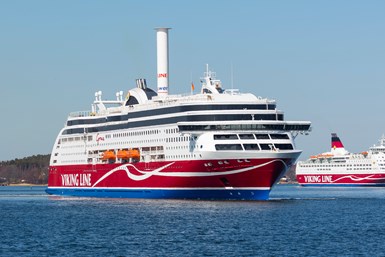 The main cylinder of each rotor sail is composed of multiple, shorter tubes — resin-infused sandwich structures fabricated and bonded together by composites manufacturer Comaxel (Goldap, Poland) at its specially designed assembly facility. Dry preforms for the tubes comprise 50K carbon fiber unidirectional (UD) reinforcements from Zoltek (Nyergesújfalu, Hungary) and stitched glass fiber reinforcements from several different suppliers, with Gurit (Wattwil, Switzerland) Kerdyn Green structural core made from 100% recycled PET. The laminate preforms are laid up and double vacuum bagged into composite, one-third-cylinder molds made by Comaxel, which are wired for resistance heating.

According to Michael Rann, managing director of Comaxel, mold construction was the largest challenge in the manufacture of the rotor sails. For precise assembly and minimal weight, the cylinders are manufactured at very tight dimensional tolerances that can be stricter than 0.1% — which Comaxel is able to accomplish partly through its mold construction. Traditional glass fiber molds are reinforced with a smaller amount of UD carbon fiber, Rann says, to decrease the coefficient of thermal expansion (CTE) values to the needed levels. The molds are also controlled by an advanced and innovative microprocessor control system developed by Comaxel. Using this system, the molds are held to ±2°C during ramping of the heating process, and ±0.1°C during final post cure. According to Rann, this system enables control of multiple units at the same time with only one control unit, which can handle molds with one heating zone or up to 960 zones of up to 2.5 square meters each, he adds. The control system is also equipped to run a diagnostic check before each process to self-detect any possible failures and to calibrate even heating across all zones.

The laminates are infused with high-strength PRIME 27 epoxy infusion resin. Demolded and trimmed cylinder sections are then bonded and tabbed together using Gurit high-strength Spabond 340LV epoxy adhesive and Gurit Armpreg 31 epoxy laminating resin with carbon and glass tapes. This same method is used to bond the completed tubes together into the final cylinder for the rotor sail. This durable composite construction, well-proven in thousands of yacht masts and wind blades, is then finished to achieve smooth windward surfaces and rotational tolerances using Gurit S-Fair epoxy fairing system. The finished structure is then shipped — a feat strikingly similar to transporting wind blades — for installation onboard cargo ships, cruise ships or ferries.

Since the start of the project, Rann says that, through Comaxel’s partnership with Norsepower, weight of the rotor sails has been reduced by 10%, and production and assembly time has been reduced significantly. “From day one, the collaboration between Norsepower and Comaxel has been very open and trustful,” Rann says. “Due to this relationship, we have one of the most amazing products on the market.”

Typical fuel savings provided by use of rotor sails is 5-20% per ship, cutting emissions from fuel consumption per Norsepower’s goals. For the overall rotor sail solution, Norsepower won a 2020 Innovation Award from JEC Group.

In August 2018, Norsepower first announced that two of its 30-meter rotor sails had been installed onboard the Maersk Pelican tanker vessel in cooperation with partners Maersk Tankers (Copenhagen, Denmark), Energy Technologies Institute (ETI, London, U.K.) and Shell Shipping and Maritime (The Hague, Netherlands). Currently, Norsepower is producing components for its rotor sails at several manufacturing facilities located in Poland, with a larger production facility expected to open in the coastal Chinese province of Jiangsu by the end of 2020. This first Chinese production line is expected to produce up to 50 rotor sails per year, Riski says.

Expanding options. Norsepower currently markets five sizes of its rotor sails, plus a tilting option, for ships ranging in size from large shipping tankers to passenger ferries, like the one shown here. Photo Credit: Norsepower

Rotor sails can either be built directly on new ships under construction, Riski says, or retrofitted onto existing ships. Norsepower also offers a tilting rotor sail option, introduced in June 2020. This does not affect the rotor sail product itself, but allows the device to be installed on a tilting foundation via hydraulic hinges, Riski explains, to enable a temporary lowering of the rotor sail for passage under a bridge. Norsepower also works with shipbuilders on installation of the rotor sails. “It’s a ship-specific thing to pick the right rotor sails and to design where and how many rotor units will be installed,” he says, adding that Norsepower can help shipbuilders determine the correct distance between rotor sail units on different ship sizes to ensure proper balance.

Next, Norsepower plans to scale up production both in Europe and at its new Chinese manufacturing facility. Riski notes that Asia is a growing market for the technology, and the source for most of the company’s orders on new ship builds. “We foresee that the business will grow quite fast during the following years,” he says.

Norsepower plans to produce more than 200 rotor sails by 2025, but the larger goal, Riski says, still remains to reduce emissions. “If all feasible ships that could be fitted with rotor sails were fitted with them, we could reduce the global annual carbon emissions from shipping by roughly 70 megatons of carbon.