Automotive liftgates, or rear-hatch doors, have slowly been transitioning from metals to composites for decades. While it wasn’t until 2013 that the first all-plastic/composite liftgate, minus metal support structure, was commercialized, most liftgates today still feature this support component on which outer skins and inner panels are attached, particularly on larger, heavier sport-utility vehicles (SUVs) and crossover-utility vehicles (CUVs) with bigger rear doors.

However, what may well be the next evolution in composite liftgates debuted in 2019 on the Toyota Supra sports car from Toyota Motor Corp. (Toyota City, Japan). A filament wound composite frame replaced a metallic frame and is said to offer higher stiffness and strength at lower weight than traditional metal structures, with greater design flexibility, especially in tight packaging space. Reportedly, the filament winding process has been modified to such an extent that, as interest grows and applications proliferate, it can meet the speed and cost targets of higher-volume vehicle production. This is how the design and technology came to be.

Recently, Magna participated in an interesting program involving automakers Toyota and BMW AG (Munich, Germany), which have worked cooperatively on design and manufacturing projects since 2013. For its latest effort, Toyota was looking to revive its Supra nameplate and had partnered with BMW to provide design and tuning for the vehicle and a sister car, BMW’s 2-seater Z4. The two vehicles share engine, suspension and steering systems. Magna Steyr would assemble both cars in Graz, as well as supply the Supra with seats, body panels, door latches and liftgates. While there’s plenty of innovation on both cars, the liftgate incorporated in the Supra is where composites design innovation is most apparent.

Years before Magna’s involvement with the 2020 model year Supra, its operation in Liberec, Czech Republic, had been exploring technologies for composite space frames for a number of potential applications. As luck would have it, the area has a rich tradition as a leading textile center and was once known as “the Manchester of Bohemia.” The Liberec team sought a technology architecture that supported high loads, reduced overall mass, maintained tight dimensional tolerances and could be produced in a process with high repeatability and reproducibility (R&R) to meet the performance and manufacturing demands of European automakers.

“We concluded we needed a thermoset product with high thermal and dimensional stability,” recalls Riad Chaaya, Magna global product line director - composite liftgates. “We also knew we needed a closed shape with the ability to produce cross-sections of variable shapes and thicknesses — necessary to optimize mechanical performance, package space, mass and cost — that could be produced in a process capable of making 150,000 parts annually. We looked at many technologies, including blow molding, braiding and filament winding, but none quite met our needs. After many trials, we selected filament winding as the best match for what we wanted, since it gave us control of orientations and numbers of filaments to extract the highest modulus at the lowest weight.”

Despite many benefits, there was concern that filament winding might be too slow for conventional automotive production. Additionally, the team needed a method to begin and end the winding process in order to create a closed-shape frame. Fortunately, while the team had no history with filament winding, Liberec’s legacy of textile manufacturing meant the local community was full of experts in rovings and the winding of filaments.

“Lucky for us, these experts had the passion to resurrect their traditional know-how to help us apply it in new ways to meet high-volume automotive needs,” adds Dr.-Ing. Josef Půta, Magna Exteriors technology leader - Czech Republic.

“Because traditional filament winding was too slow for our needs, we and our partners looked at many ways to make it run faster,” recalls Lukáš Strouhal, head of industrialization, Magna Liberec. “We considered ways of speeding up each step in the process as well as doing things quite differently. While we can’t say too much about how we did that, we can say that we achieved huge improvements in speed, so that our modified process could become ‘automotive worthy.’” 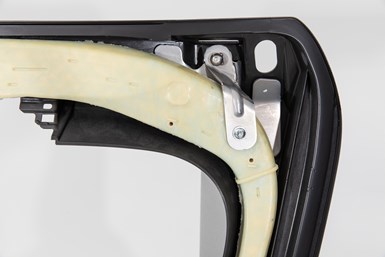 Magna and its partners explored many resin systems, including epoxy, polyurethane (PUR) and a PUR/vinyl ester blend, plus a variety of reinforcements, from glass to carbon to basalt fibers. The final system features PUR and glass fibers, which offered the best balance of fiber efficiency, performance, cost and production speed. 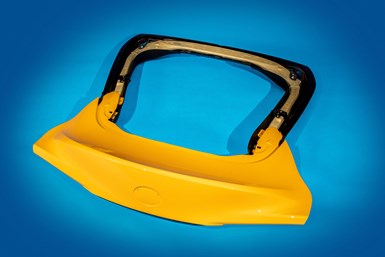 Magna’s generic filament wound space frame is produced in three steps, each carefully optimized for speed. First, a rigid, cellular PUR core is produced via reaction injection molding (RIM); second, that core, which functions as a mandrel, is wound with glass fiber; and third, that wound structure is then infused with PUR and consolidated in the high-pressure resin transfer molding (HP-RTM) process. Care is taken to ensure the core doesn’t collapse during infusion/consolidation. Půta explains that much work went into specifying the types of rovings, sizings and resins used — requiring close work with suppliers on material modifications — as well as determining the number of windings and orientation of filaments in each layer. Not surprisingly, the company has been issued numerous patents covering everything from design and core production, to the filament winding machine, plus additional trade secrets they hold close.

“We have made multiple innovations in each process step and product,” explains Strouhal. “You could tear one of our frames apart, see the shapes and geometries used, and you’d still wonder why and how we did that.”

Although the Magna Liberec team had not developed its space-frame technology for a particular application, they were about to get an interesting opportunity to use it.

Magna has a long history of producing passenger-vehicle liftgates. The company reportedly built the first all-olefin liftgates in North America and Europe for the 2013 BMW i3 electric city car, and designed and built a next-generation all-olefin liftgate for FCA NA LLC’s﻿ (Auburn Hills, Mich., U.S) 2019 Jeep Cherokee SUVs. Given that liftgate production was a deliverable for the Supra program, Magna not only drew upon the work done in Liberec, but also its long history of converting metallic liftgate structures to composites and plastics.

“The Supra liftgate offered a number of immediate challenges,” recalls Chaaya. “First, package space was very limited, meaning tolerances were very tight and coefficient of linear thermal expansion values must be carefully managed to keep liftgates opening and closing freely. Second, the shape of this door was even more challenging. Toyota not only wanted a lighter liftgate, but they had very specific styling requirements for how the back of the vehicle draped. Third, with the vehicle’s projected build volumes, tooling to achieve that shape in metals would be very costly. In fact, we concluded the liftgate frame couldn’t be produced in a single piece of metal and still meet Toyota’s design and performance requirements. That meant the space frame had to be made from composites and, more specifically, thermoset composites.”

The outer skin would be a painted, injection molded talc-reinforced TPO panel to handle the aggressive shape, while the inner panel would be long-glass polypropylene (PP); both would be joined to the frame with a structural 2K PUR adhesive. Chaaya adds that much work was done to optimize the space frame and complete the liftgate to meet torsional loading requirements. An early challenge was to find a way to accurately simulate material properties to achieve accurate correlation between predicted versus measured results.

“It was a hard fight to get good correlation with our material models, since we had to simulate each layer of winding and incorporate shape, radii and the winding requirements themselves,” he adds. “Although we started out being off 20%, after much tuning and determining the best way to improve our stiffness, our final predictions were very close. On such a big frame, we also managed to hold dimensional tolerances to 1 millimeter.” 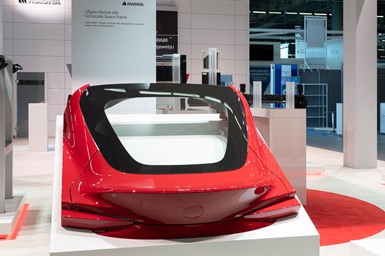 The final composite frame is ~10% lighter than a comparable metallic frame. However, mass-decompounding effects help make the entire liftgate ~20-25% lighter than a comparable metallic liftgate. Lighter liftgates are easier for consumers to operate, require less effort for line workers to handle during vehicle assembly, save fuel during vehicle operation and provide what’s described as a satisfying sound when closed. Photo Credit: Magna International, Inc.

The final donut-shaped frame features variable diameters and wall thicknesses throughout, but has a nominal diameter of 50-60 millimeters. Other than a small bracket in the corner, and hard attachments like latches and hinges, plus foil to ground the integral antennae, the entire frame — which is 104 x 111 centimeters — is entirely composite. Even “ear” brackets, used to connect the inner trim panel to the bottom half of the liftgate are composite and manufactured via HP-RTM. Although the composite frame is 10% lighter than a comparable metal frame, mass-decompounding effects mean the complete liftgate is ~20-25% lighter than a metallic liftgate. Lighter liftgates require less effort for consumers to open/close, are easier for a worker to install during vehicle assembly, save fuel during vehicle use life and provide what Strouhal describes as “an amazing solid sound” when the liftgate closes. The composite system also eliminated steps like hemming edges and welding points/joints required with metal liftgates.

Chaaya hints his company has another major filament wound automotive project underway. He also says Magna sees other uses for the technology beyond liftgates. “Doors, decklids, hoods, FEMs (front-end modules) and even autonomous vehicles — like a bus that is comprised of a glass-wrapped frame — could use such a space frame,” he adds. “And it wouldn’t even have to be hidden. If we used carbon fiber weave, it would be a sign of prestige to leave that beautiful surface exposed and not hide the frame inside.”