Conventional metal window wells installed as coverings around basement windows will rust over time, which may compromise the strength of the well and could even collapse under pressure from backfill — soil filled in to replace that which was excavated to put in the window. RockWell Window Wells (Springville, Utah, U.S.) has for years offered a product lineup of fiber-reinforced plastic (FRP) window wells and related products with lighter weight and higher quality, wear life, temperature resistance and impact resistance than typical metal offerings. For its newest Denali product line, RockWell set out to provide a lower-cost and more aesthetically pleasing composite option than was previously available on the market, according to Vaughn Cook, president of RockWell. “We wanted to build a high-quality part that competes with a steel window well but that has better properties, such as impact resistance and light weight,” he says.

The company’s original RockWell FRP window well line is made via vacuum-assisted resin transfer molding (VARTM), and is, Cook says, “a very impressive, high-end product, with a detailed, molded stone texture that looks and feels like real stone.” About two years ago, Cook and his team decided to develop a new line of glass mat thermoplastic (GMT) window wells to meet a lower price point in the market. “We couldn’t use such a hands-on manufacturing process [for the Denali wells] — the process needed to be much faster, and much lower in cost to produce it. That’s when we reached out to Commercial Tool,” Cook says. 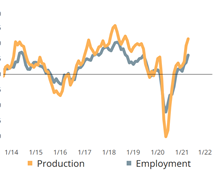 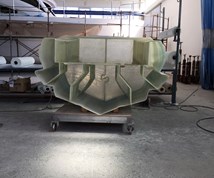 RockWell and Commercial Tool Group (CTG, Grand Rapids, Mich., U.S.) connected at an Amerimold trade show in Novi, Michigan. Cook was looking for a moldmaker with large CNC mills for massive compression molds and that was familiar with composite technology — and, Cook notes, one that could bring an added level of automation to the process.

CTG ended up being a perfect match, as a company with multiple divisions that include Commercial Tool & Die (CTD) specializing in large-scale CNC machining for moldmaking, and CG Automation & Fixture (CGAF) which designs and manufactures a variety of down-line equipment and fixtures, as well as advanced materials handling systems and robotic articulation.

The mold sections begin as large aluminum billets and the machining is done on a Zimmermann portal milling machine at CTG’s plant. According to Scott Chase, engineering and sales manager for Commercial Tool & Die, the typical finished mold measures 66 inches wide × 109 inches long × 60 inches tall. The molds use an in-process thermal imaging camera to monitor temperature variation. In addition to meeting structural and size requirements, Cook adds, “Scott and his team were also able to help us come up with a design that makes a more aesthetically pleasing window but still has the structural members in it to give the wells the strength that we need. CTG put a textured grain in the mold surface to help decorate the part.” A robotic articulation system for loading and unloading was also designed and provided by CTG to work in tandem with the molds during production.

CTG also produced three prove-out molds during the development process on this project. The molds were designed using Siemens NX CAD/CAM/CAE software and they are among the largest production molds ever made by CTG, according to Chase. The entire project took just over a year, from the initial contacts to the production of the first mold for use at RockWell. 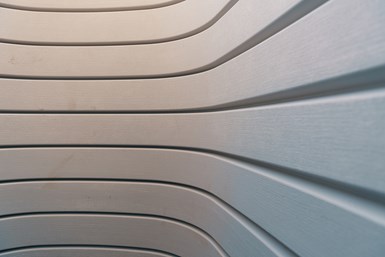 The CTG system benefits RockWell in various ways, as the system is more automated, permitting the company to produce greater volumes of product with higher consistency and traceability. Furthermore, it is much easier for RockWell to access all the information it needs from one company as opposed to coordinating with three or four different ones, Cook notes. This flow minimizes errors, which reduces production lead time and keeps costs down. Without the collaboration between RockWell and Commercial, Cook believes that there would be delays in scheduling, higher costs and lesser quality of workmanship on the finished products being produced at his company.

CTG made adjustments to the software programs and processes on-site at the RockWell facility. “These products would have been impossible to fabricate without Commercial’s automated systems, as the cost and safety risks would have been too high, in our calculations,” adds Cook.

“Although this was RockWell’s first project with Commercial, it certainly won’t be our last,” he concludes. “It was a perfect match for our success with this new Denali line, which is already gaining popularity in the market.” RockWell’s window wells are sold through various wholesale distributors to contractors and builders.