Carbon fiber midsole plates, shanks and other components have been enhancing the performance and reducing the weight of top-tier athletic shoes for years. However, explains Junus Khan, founder and chairman of Carbitex Inc. (Kennewick, Wash., U.S.), even with composites, shoe developers must typically compromise when it comes to material choice for midsole plates: the choice is between a material rigid enough to support the foot during the required activity, though it may be inflexible and heavy, or a material that is lightweight and flexible, but doesn’t provide as much support. Either choice, or a compromise material that sits somewhere in between, makes the shoe — and the wearer — inherently inefficient, something that Carbitex says it has been able to overcome through the development of its product line of flexible carbon fiber/thermoplastic composite materials.

However, Khan notes, he didn’t originally set out to transform the footwear industry. A little more than 10 years ago, Khan, whose background is in economics but who learned about carbon fiber composites through working in the automotive industry, took a look at the luggage market and wondered why luggage makers were trying to mimic the aesthetics of carbon fiber using ballistic nylon and other fabrics, instead of using actual carbon fiber. Unable to find a company that made a soft, pliable carbon fiber product suitable for the luggage market, he decided to try his hand at making it himself.

In 2010, Khan began investigating various carbon fiber materials in his garage in his spare time, and by 2011, his first material and process were tested at the U.S. Department of Energy Pacific Northwest National Laboratory. At that point, he says, “I had a viable concept, and a better understanding of the material space,” and he decided to turn this concept into a company, with the goal of continuing development and ultimately selling the material. Carbitex Inc. was founded in February 2012.

From luggage to footwear

Khan explains that other companies have developed semi-flexible carbon fiber fabrics by suspending a single ply of fabric in between two thermoplastic films. “However, when you pull that material in tension, the failure mode is those films ripping off the surface of the carbon,” he says, meaning that a tendency toward delamination can hinder the amount of actual flexibility available to the laminate. 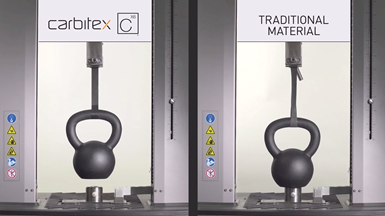 Carbitex’s CX6 product, its original product offering, is also a single ply of carbon fiber fabric laminated between thermoplastic films. But, Khan says, the fabric is first treated with a specially developed binder that, according to a U.S. patent Carbitex filed in 2015, gives the laminated fabric “flexibility similar to fabric not laminated with polymer films, and improved adhesion and tensile strength.” He adds, “When you pull our CX6 material in tension, the failure mode is the fibers actually breaking, not the film delaminating. You’re really getting that trademark strength of the carbon fiber.” The material is also said to have very low stretch properties compared to other composite materials, which Carbitex found a use for in precisely manufactured footwear components with improved power transfer.

Carbitex began selling its first CX6 product within the luggage and handbag industry to companies like Tumi (South Plainfield, N.J., U.S.), as Khan had originally set out to do. Quickly, however, Carbitex began to receive inquiries from a variety of other industries, such as consumer electronics. While the growth was exciting, he says, “At the same time, we started to realize that we were spreading ourselves very thin.” About three years ago, the company made the decision to focus on one market that showed the most potential: footwear.

Today, Carbitex supplies its carbon fiber plates across the footwear industry, where they are used in snowboarding, cycling, watersports, running, hiking, fashion products and more. One of the company’s most recent and highest-performance footwear applications is a soccer cleat released by Adidas in fall 2020. Focus on footwear. Though expecting to move into other industries soon, so far Carbitex is putting most of its development focus across the footwear industry.

Over the past several years, Carbitex has released two new composite technologies, called AFX and DFX. According to Khan, unlike “typical composites” whose stiffness is controlled by fiber orientation and ply length, stiffness of a Carbitex carbon fiber sheet is uniform across its length. Where other composites may consist of one type of resin system and fiber, he says, Carbitex’s materials are more complex, involving intricate layers of polymers sheets and fabric layers, to achieve the desired flexibility properties.  “A very simple version of our AFX material might have two different types of carbon fiber sandwiched between another two or three different types of polymer,” he says. “It’s an intricate layering system, and you have to understand how those layers have to come together for [the required] properties.”

Generally, the manufacturing process starts by layering fabrics, which may be treated with binders or other fabric treatments, and polymer sheets into a panel. A variety of fibers from different suppliers are used, although Khan says most of Carbitex’s products include fibers from Toray Composite Materials America (Tacoma, Wash., U.S.) and often spread tow fabrics from Hexcel (Stamford, Conn., U.S.). Polymers also vary by application, but are typically thermoplastic for flexibility and formability, “though sometimes it’s not completely thermoplastic, depending on the application,” he adds.

These panels are consolidated in heated presses; once removed, individual parts are cut via waterjet and formed. Manufacturing in panels rather than laying up individual parts leads to higher output than traditional layups, Khan says.

First, specific layers of woven fabrics, prepregs and polymer films are stacked together into a panel.

Next, the panel is consolidated in a heated press.

Specific components are cut from the cured panels via waterjet.

The resulting carbon fiber composite midsole (pictured is a DFX component) will be assembled into a final footwear application.

Along with balancing rigidity and flexibility, though, there is an added challenge to developing footwear: the human foot can only bend in one direction without overextending or breaking, so shoe materials need to have the versatility to  bend in certain directions but not others. Carbitex achieves this, Khan says, through controlled buckling, or bending, of the 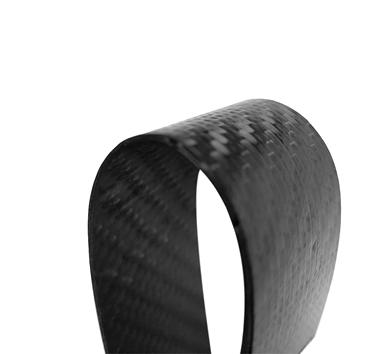 Buckling on purpose. The AFX material is designed to bend only in one direction, following the limitations of the human foot.

laminate. “Typically in composites, the word ‘buckling’ is attributed to failure,” Khan says, “but we’ve come up with ways to enable the fiber to buckle but not break.” This invention, he adds, was initially made by accident, as a colleague realized that a certain combination of fiber and polymer layers had resulted in a material that buckled in only one direction. “We realized there had to be some kind of benefit to that,” Khan says, “so we started peeling the layers back, to learn how it happened and then understand how we could do it on purpose.”

The resulting product is called AFX, where the “AF” stands for “Asymmetrically Flexible,” indicating that it bends in one direction but is completely rigid in the other. According to a 2018 patent filing, Carbitex’s AFX product comprises a woven fabric layer, a prepreg layer and, in between, at least one polymer layer, which are combined into an assembly that is then shaped and cured. “The layered arrangement has a high resistance to bending in a first direction, and a low resistance to bending in an opposing second direction,” the patent says.

“Our technology enables the level of stiffness and protection in the direction that you want it,” Khan adds. A hiking boot incorporating an AFX carbon fiber midsole, for example, includes the support and rigidity needed to protect the foot against bending the wrong way on uneven or vertical terrains, but “when you go to bend your foot to walk on flat ground, [the boot is] just as flexible as, say, a running shoe,” he says. AFX is also lighter than the combination of board and rubber materials that are often used to reinforce hiking boots.

Carbitex’s third product is called DFX, a derivative of AFX that stands for “Dynamically Flexible,” meaning that the stiffness of the material within the shoe changes as the foot moves. With DFX, “you can have [a shoe] that’s going to be super flexible at certain angles, and then become progressively or exponentially stiffer at higher angles,” Khan says. “In footwear, this correlates directly to performance.” According to its 2020 patent filing, DFX consists of at least three layers assembled and cured into one laminate: a binder-enhanced, flexible woven fabric layer; a more rigid woven fabric layer; and at least one polymer layer.

Khan notes that a running shoe or cleat can be soft and flexible when an athlete is walking onto a track or onto a field, and then, once the runner takes off and the foot starts bending at higher angles, the shoe will become stiffer to support the movement. “Companies no longer have to compromise and choose a specific midfoot stiffness — we can identify the different functions of a given activity and engineer the stiffness around that.”

“Another way of looking at it is that DFX augments the foot’s performance, acting like muscles or ligaments that become flexible or stiff depending on which way they’re stretched. The AFX material acts more like a joint like your elbow or your ankle — it’s designed to bend really well one way,” he adds. Dynamic flexibility. In Adidas’ X Ghosted soccer cleats and similar applications, the DFX material enables changeable flexibility depending on the movement of the wearer.

Each material iteration so far has been specially designed for a particular performance range and level of manufacturing integration identified as applicable to the industry, with room for customization within that, such as specific stiffness or durability requirements. The company also offers custom samples to potential customers. “We continually gather data about our composites and how they work and why, and have built our own modeling systems to turn around different versions as needed pretty quickly. Usually within a day or two of receiving an inquiry we can have a custom sample made and out the door,” Khan adds.

“Right now, our goal is to continue expanding within footwear, and trying to capture that opportunity,” Khan says. However, a long-term goal is for the company to grow into other industries, such as aerospace and medical applications.

“One industry that's really top of mind for us, both as a market where our products would have a true benefit and also as one that has some similarities to footwear, is the orthopedic and prosthetic realm, and maybe even the robotic side as well,” he says. Dynamic flexibility in prosthetic limbs, he adds, is currently accomplished through heavy and expensive electronics systems and hydraulic actuators. Khan envisions use of Carbitex’s products in applications such as knee or back braces, where the material could be engineered to prevent certain motions or hyperextensions, while enabling other movements. He adds, “With a brace, you’re typically immobilizing part of someone’s body because of just one movement that would be really bad for it. The key would be to make a brace that limits that one direction of movement, but enables the person to then be able to move in other directions.” In alignment with this goal, Carbitex has recently begun development of an application with a company that makes braces geared toward children. The company’s materials have also been used, Carbitex says, to develop a carbon fiber pad for a compression sleeve designed for hikers, and a neck brace that connects to a football player’s helmet and shoulder pads to prevent the neck from snapping backward during gameplay.

In pursuing other applications, Carbitex hopes to use its products to eliminate material compromises in other industries, like it continually aspires to do in footwear. Khan adds, “It sounds cooler to say that you’re striving for products that make you faster, better and stronger, and we are doing that — but ultimately, we’re always pushing for efficiency.”