The 1-1.2-millimeter-thick shank achieves the desired lightness while being strong enough to meet torsion requirements. The fiber orientation is optimized to enable high stability of the shank for torsion, and the material is compatible for adhesion with other shoe components.

When approaching the design for an athletic shoe — or for sports equipment in general — performance is key. Numerous factors make up a performance shoe, and the requirements vary by shoe function; running shoes have different requirements than basketball shoes, for example. Running shoes are light and flexible and designed to cushion and stabilize for a long run, while basketball shoes are designed to provide ankle stability and absorb shock during sudden changes in direction. How a running shoe allows a runner to land and push off for each step is a subject of constant evaluation for engineers as new technologies emerge. High-performance materials such as carbon fiber can help provide stiffness without adding a lot of weight in such parts of a shoe as the midsole, toe kick and shank (a supportive structure in the shoe that runs beneath the arch of the foot).

Chinese sportswear startup Bmai (Beijing, China) had the goal of making a high-performance marathon shoe at a price that everyday consumers can afford, but it wanted to take advantage of carbon fiber’s light weight and stiffness.

“One of the key drivers for footwear innovation is new materials,” says Axis Liu, lead designer for Bmai. “Material technologies have advanced by leaps and bounds in the past one or two decades. There are now a plethora of materials to choose from, but lighter weight materials that provide better support, stability and performance are increasingly sought after as brands rely on them to increase their competitive advantages.”

Carbon fiber has been used in high-performance footwear since the 1990s, with footwear brands such as Nike and Adidas adopting it for elite athletic shoes. Running shoes featuring carbon fiber can range from $160 to $250. For example, the Nike ZoomX Vaporfly, which features a full-length carbon fiber plate in the midsole, retails for around $250. When you consider that running shoes need to be replaced every 300-500 miles, which ends up being every 4-6 months for a runner who averages 20 miles per week, the cost can add up quickly. Bmai wanted to produce a sneaker that good performance, yet was accessible, aesthetically appealing and affordable for the mass market.

“One of the best things about running is you pretty much just need a pair of good quality shoes to start,” says Liu. “We don’t want to let expensive footwear become a barrier.”

The company set out to test a prototype carbon fiber shoe shank in a limited edition version of its flagship running shoe, Mile 42K — a design aimed at recreational marathon runners. The ultimate goal was to find a solution that would allow Bmai to produce a commercial shoe that could retail for around 399 yuan ($56 USD). The company﻿ also aimed to reduce weight while providing torsion resistance and organic aesthetic properties, which carbon fiber does well.

High-volume production possibilities. Because it is a thermoplastic, Maezio can be thermoformed at high yield rates, shorter cycle times and lower costs.  Source | Covestro

Enter the new Maezio brand of continuous fiber-reinforced thermoplastic (CFRTP) composites introduced by Covestro (Leverkusen, Germany; Shanghai, China) in October 2018. The product line includes unidirectional (UD) reinforced tapes and sheets made from carbon fibers impregnated within a polycarbonate (PC) matrix. According to Covestro, the CFRTP can be tuned for performance, aesthetics and economies of scale, and can be used in products in a wide range of industries. A thermoplastic polyurethane-based product line was also recently added, extending the portfolio for the footwear industry.

Maezio can be thermoformed at high yield rates, shorter cycle times and lower costs for millions of parts per year. Other production technologies such as overmolding, automated tape laying (ATL) and automated fiber placement (AFP) can also be integrated. The company sees Maezio as a material enabler for high-volume production in a diverse range of applications.

“We believe the Maezio brand can bring value to a new generation of products across industries by delivering a combination of lightweight construction, specific strengths and finishes at a scale yet to be reached by advanced materials,” says Lisa Ketelsen, head of Thermoplastic Composites for Covestro.

The main advantage of Maezio is its tuneability. The UD tapes, which are just 120 microns thick, can be laminated at different angles to form sheets tuned to meet a variety of performance and mechanical criteria. Resulting sheets are strong, stiff, lightweight and have a natural, unidirectional surface finish. In addition, CFRTP composites are recyclable.

New athletic footwear designs require a high degree of adaptability in the approach. M﻿odification is part of the design process and a great deal of testing and iteration is often required.

“[Shoe performance] is very targeted to the specific objective,” says Arne Boettcher, market development manager for Maezio. “You need a material that you can tailor to the exact needs of the application and the athlete — and that’s exactly what Maezio is.”

Bmai says Maezio is well suited for Bmai’s shoe because in addition to offering stiffness with low density, the material offers the freedom to tune.

“Depending on how you lay the tapes, the material is able to generate different stiffnesses or torsion performance dependent on very specific needs of that shoe,” explains Ketelsen. 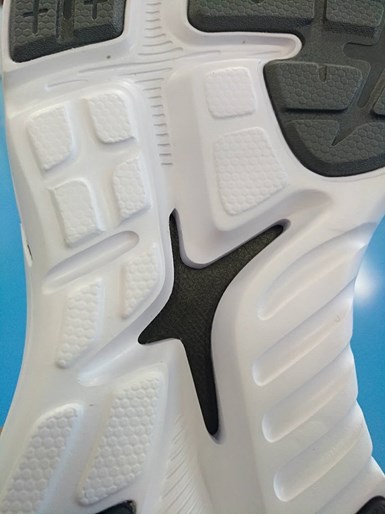 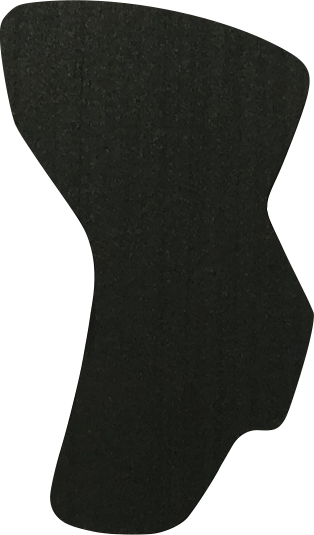 Thin, but strong. Shank thicknesses are typically in the 1-1.2-millimeter range.  Source | Covestro

In order to meet weight targets for the Bmai shoe, the shank would need to be thin, but also strong enough to meet torsion requirements. With that in mind, the team focused on determining ply count for the shank. While Covestro would not comment on exact number of plies or fiber orientations, the company did state that typical shank thicknesses are 1-1.2 millimeters and hypothesized that a fiber orientation of 45 degrees would achieve the required torsion resistance at the required thickness. From that starting point, Covestro tested and iterated  different layups.

According to Ketelsen, the key to designing the optimal solution for Bmai was a cycle of fast iterations that included design brainstorming sessions, tuning the product, simulating different compositions, creating a sampling based on the simulations, cutting and slitting each sample to shape, and delivering test samples to Bmai for feedback.

Covestro uses ABAQUS (ABAQUS Inc., Pawtucket, R.I., U.S.) for structural simulation and MOLDFLOW (Autodesk, San Rafael, Calif., U.S.) for rheologic simulation as standard software. “There are certain requirements that we can simulate internally,” says Ketelsen. “We do the simulation [and] have facilities in Germany, the U.S. and China to assemble certain parts, do physical tests and analyze the data and take it back to production and adapt.”

During the course of the project, Covestro iterated the design several times, sharing details and results, and then adapting the design. Close communication was important between Bmai and Covestro’s APAC Innovation Experience Center in Shanghai where a range of tests were conducted including bending and fatigue tests, and quality tests for suitability and performance. The company relayed results to Bmai frequently, communicating the ways in which the product needed to be tuned.

“You can’t just sit down and design it — you have to test and iterate,” adds Boettcher. “Companies like Bmai are more used to just doing and finding it out … testing, failing and then testing again.”

Throughout the many design iterations, Covestro also found itself balancing several additional considerations including the component’s adhesion compatibility with other materials in the shoe. Nevertheless, speed to market was also important given the highly competitive athletic shoe market where new styles debut quickly. According to Boettcher, speed and agility in producing testing samples was essential.

Bmai’s 42K Lite was unveiled last year and met the company’s requirements for torsion, aesthetics and overall performance. Covestro says the design process with the shoe offered insights into how the company might work with Maezio in other markets.

“[The] key is the interaction with the designers, and the interaction with those that make decisions,” says Ketelsen. “What we did very well in this example with the shoes — and something we want to take into other industries as well — was to set up a hypothesis based on what we think is valuable, and then test and iterate that with the customer.”

According to Covestro, Maezio is also attracting interest in the electrical and electronics industry, automotive, medical technology, consumer goods like household appliances, furniture and luggage, in addition to sporting goods and athletic shoes. To further its research, Covestro launched a new R&D tape line in Germany in July 2019.