In 2016, I made a short tour in Mexico to investigate the growing composites industry there. Guided by Alfonso Cuellar, director of the composites distributor AIC International (Corona, Calif., U.S.), I visited a variety of composite manufacturers between Mexico City and Querétaro. The latter has become a center of excellence for plastics, composites and aerospace manufacturing and maintenance. My timing was unfortunate, as Donald Trump’s vitriol toward our southern neighbor began shortly afterward. My scheduled feature on composites in Mexico was postponed because I didn’t want to transform these new ventures — including Bombardier’s (Montreal, Canada) facility in Querétaro for producing the LearJet 85 — into targets for ill will.

Last December, however, the growth of composites in Mexico was further confirmed, with news about the first composite fuselage made at the Aeronautical University in Querétaro (UNAQ), which I had visited in 2016. This prototype fuselage for Oaxaca Aerospace’s (Tlalixtac de Cabrera, Oaxaca, Mexico) Pegasus P-400T two-seat trainer jet aircraft was made by the UNAQ spin-off RHEM composites. I have interviewed RHEM Composites and now am finally getting a chance to tell not only their story, but just a little about how composites are maturing and have, I believe, a great future in Mexico.

Oaxaca Aerospace was founded to manufacture high-speed aircraft for reconnaissance, aerial surveillance and training missions. Begun in 2011, Pegasus was to be an agile, fast and inexpensive two-seater jet aircraft. Oaxaca Aerospace general manager Rodriguez Fernandez explained the goal was to make an innovative aircraft, completely different from what already existed, using modern engineering and advanced software. Rodriguez and his father, Raúl Fernandez, director of Oaxaca Aerospace, have noted that although military aircraft were made in Mexico in the 1960s, they were copies, and most aircraft currently in use by the Mexican government date back to the 1950s, modernized only in avionics and engines.

In contrast, the Pegasus P-400T is to be part of a new generation of fighter planes, developed and built in Mexico, and adapted to the needs of the Mexican Air Force. Composites are a key part of that vision, delivering high performance with lower operating costs versus metal construction. The P-400T unveiled in 2019 will reportedly cost only $3 million compared to similar aircraft costing up to $11 million. Measuring 8.4 meters long and 4 meters tall, it will have a top speed of 550 kilometers/hour with a range of ≈2,250 kilometers and a 5-hour flight capacity. Its 400-horsepower turbocharged engine is reported to consume only 57 liters of fuel/hour compared to 189 liters/hour for similar aircraft.

The first prototype, the Pegasus PE-201A, was built in aluminum and completed in 2013. By 2015, the design had evolved to the P-400T along with a need to reduce weight and thus, move away from aluminum and toward composites. 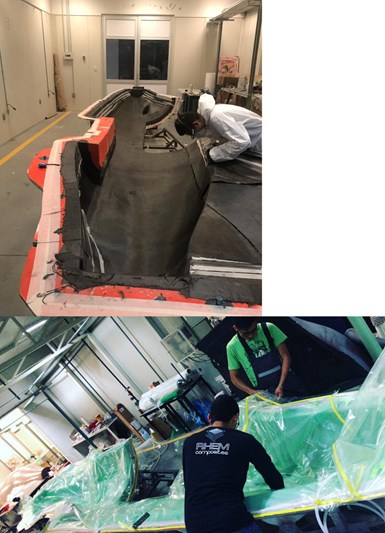 For the P-400T composite prototype fuselage, RHEM Composites used eight layers of carbon fiber multiaxial fabric for the base and quasi-isotropic layup with additional build-ups in specific areas. This layup was then vacuum bagged and infused with epoxy resin. Source | RHEM Composites

“At this point, Oaxaca Aerospace formed an agreement with UNAQ to develop the carbon fiber-reinforced polymer [CFRP] fuselage for the third P-400T prototype,” explains Cesar Gamboa, a professor of composites at UNAQ and mentor to the RHEM Composites spin-off.  “Based on initial design and structural simulations completed by Professor Gamboa, we began developing the composite laminate and structure for the fuselage,” says David Leonardo Rivera Jimenez, RHEM Composites CEO and UNAQ aeronautical engineering and manufacturing graduate. “We made samples using resin infusion and completed physical testing as well as further structural simulations.” Laminates comprised eight layers of carbon fiber multiaxial fabric with one layer of copper mesh for lightning strike protection (LSP). “Some areas of the fuselage use a quasi-isotropic laminate while a build-up of strength and stiffness is required in specific areas,” says Gamboa. “For example, additional reinforcements were required in the vertical tail area.”

“The fuselage was made using two half-molds, left and right,” notes Uriel Ramírez Barragán, RHEM Composites co-founder, sales manager and UNAQ graduate with a Master’s degree in aerospace engineering and manufacturing. Ramírez also participated in the Master in Composite Materials program at the Polytechnic University of Madrid (Spain) supported by Airbus (Toulouse, France). “The two fuselage halves are joined in the middle. That joint is then sealed and reinforced on the interior with more layers of CFRP. This was a challenge. especially along the mold edge at the canopy openings, where there wasn’t enough space to work properly.”

“We had the same challenges where framing was required,” says Rivera. “We also infused the fuselage joint and there were parts where we had to be inside the fuselage to do the handwork for this infusion. This was also a challenge.” Infusing the copper mesh LSP was not an issue, however. “It was on all of the exterior surfaces and the first layer in the mold,” notes Ramirez. “It wasn’t difficult and it didn’t hurt or help the resin flow.” He adds they used an epoxy resin that has fire-retardant properties.

After left and right halves of the P-400T prototype fuselage were infused and cured (note copper mesh LSP on exterior, bottom left), they were painted gray, then brought together and encased in clamshell tooling for joining (top left). The two halves were sealed and the joint reinforced with dry carbon fabric and then infused (top right). The joined, demolded prototype is seen at bottom right. Source | RHEM Composites

"We are proud to be involved in this project that promotes the vision of Mexican aeronautical development and promoting the growth of this sector in our country," says REHM Composites CTO, Francisco Daniel Mancera Coyotl. He adds that the support from UNAQ was fundamental and allowed them to incubate their company through the area of entrepreneurship and consolidate it even more.

“We are very enthusiastic about the future of the Pegasus P-400T aircraft,” says Rivera. “Oaxaca Aerospace was planning to show this CFRP prototype at the Mexico Aerospace Summit in October 2020.” He adds that even if the event is postponed due to COVID-19, he believes Oaxaca Aerospace will still continue forward toward production. “We would like to keep supporting that development with new prototypes and parts.” 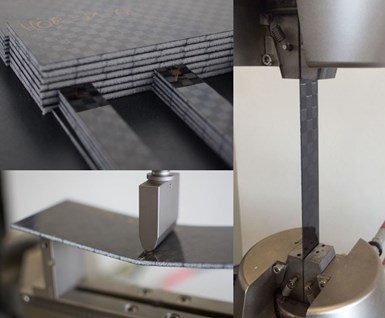 RHEM Composites was started in 2015 and now has 20 employees. “Most of us graduated from UNAQ as engineers,” says Ramírez. The company operates within hangar/production space at UNAQ. In 2016, it completed work for another aircraft company, Horizontec (Querétaro), which wanted to develop a CFRP fuselage and wing components for its Falcon light sport aircraft (LSA). “Our engineers worked with them for materials characterization and laminate design,” he adds. 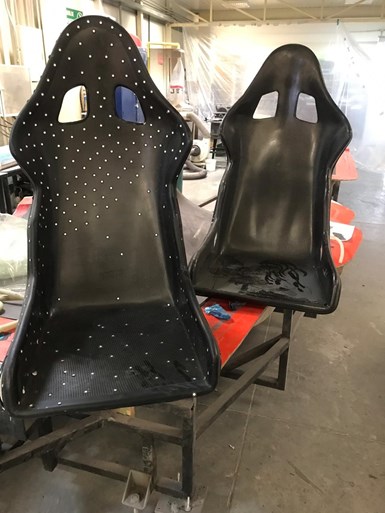 Other projects include developing a composite monocoque for a prototype high-performance electric sports car; redesigning plastic covers for an electric bicycle to be made with CFRP, cutting weight by 52%; and working with supercar/street-legal racer producer VŪHL (Mexico City and Querétaro) to design and produce ultra-lightweight CFRP seats.

RHEM Composites is also focused on composites sustainability. One of its current projects is to develop an electric bicycle using parts made from recycled carbon fiber (RCF). “Here in the Querétaro Aerospace Park, several companies work with CFRP and the waste is thrown away,” says Rivera. “We want to recycle it into new products, like this electric bike.” The company is working with the Mexican advanced technology and public research center CIATEQ, coordinated by the National Council of Science and Technology (CONACYT), to develop new products using RCF. “We have also participated in the X-challenge through Green Momentum Mexico,” he adds. “They are searching for innovative green ideas. We are using recycled fibers from ELG to make new parts and hope to win further funding to make this product commercially viable. Long-term, the goal is to support further green technology development in Mexico and Latin America.”

“We have the capability to do much more,” says Ramírez. “We want to show that Mexico has the ability and technical knowledge to develop a wide range of high-performance and sustainable applications with composites.”