New composite light sport aircraft attract flyers at the Oshkosh Fly-in, especially those with a flair for the amphibious.
#boeing #generalaviation #outofautoclave 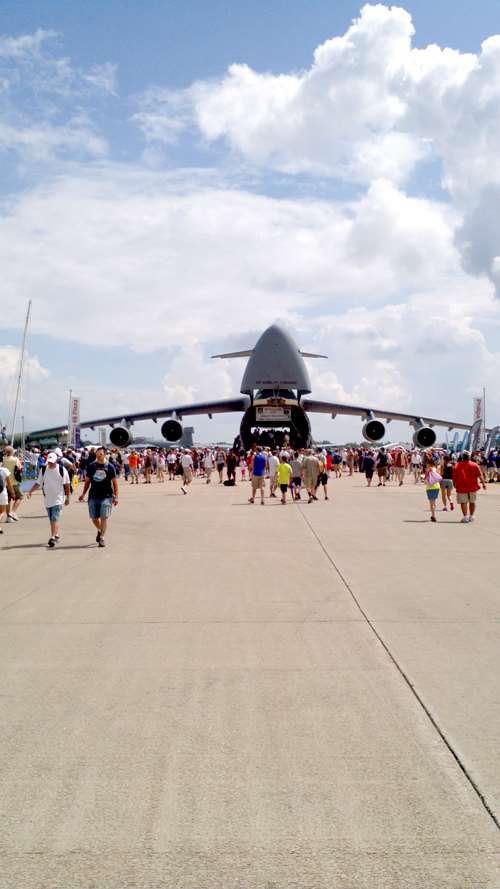 Although attendance was down slightly from 2011, EAA’s AirVenture 2012 in Oshkosh, Wis., still welcomed more than 500,000 visitors to Wittman Field. Source: HPC/Photo: Sara Black

Part of a strong contingent from New Zealand, Auroa Helicopters brought to Oshkosh this new entry in the composite helicopter field, a “microlight” rotorcraft, made with carbon composites in Taranaki, New Zealand. Source: HPC/Photo: Sara Black

The Adventourer all-composite helicopter from Composite Helicopter (Auckland, New Zealand) was popular again this year, and the program, with new financial backers, is moving ahead. Source: HPC/Photo: Sara Black

The Furio kit plane from another New Zealander, Auckland-based Falcomposite, is now flying in the U.S. The company sold at least five kits during the show. Source: HPC/Photo: Sara Black

Although attendance was down compared to 2011 — 508,000 vs. 541,000 visitors — the Experimental Aircraft Assn. (EAA) nevertheless declared its 2012 AirVenture airshow a success. EAA president and CEO Rod Hightower said the attendance was remarkable, given the hot weather and thunderstorms at Wittman Field (Oshkosh, Wis.) and the continuing struggles in the economy, and he was pleased that, ultimately, the event concluded safely.

AirVenture presented, as always, a showcase for composites in general aviation aircraft, from large to small. HPC visited a number of airframers and parts producers during the week’s events. Among the most notable was first-time exhibitor Lisa Airplanes (Le Bourget du Lac, France). The company’s Akoya light sport aircraft (LSA) was billed as revolutionary. “Multi-access technology” makes it possible to operate on water, on a hard runway (by deploying retractable landing gear) and on snow by means of skis that fit over the gear. Further, the Akoya’s folding wings permit many more options for storage.

Made with carbon/epoxy prepregs supplied by Umeco Structural Materials (Derby) Ltd. (formerly Advanced Composites Group Ltd., Heanor, Derbyshire, U.K.), the aircraft was designed with hydrofoils that project from the lower fuselage for water landings and takeoffs. That’s a first, says Lisa’s VP of development Benoit Senellart. “The stiff composite foils offer stability on the water and allow us to make the underside of the fuselage very smooth, unlike other amphibious designs that resemble stepped boat hulls,” he says. “With the better aerodynamics, we can achieve much better fuel economy and range.”

The Akoya’s tail-mounted engine burns fuel, as currently configured, at a rate of only 3 gal/hr (11.36 liters/hr). According to Senellart and U.S. marketing manager Vanessa Troillard, intensive testing over the past three years has enabled the design team to improve the aircraft, determine best manufacturing practices and qualify materials. Fabrication of the production airframe will be subcontracted to an as-yet unnamed composites manufacturer, and certification is currently in progress. The first U.S. delivery is expected in 2014.

Based on the activity and buzz at the company’s booth, interest in the Akoya is running high, although the company announced, postshow, that it is in receivership and organizing new funding, a move that reportedly will have no negative impact on customer deposits.

Crowds also were thick at ICON Aircraft’s (Los Angeles, Calif.) dramatically configured display. Big-screen televisions showed the aircraft manufacturer’s amphibious ICON A5 LSA’s reported spin-resistant design in action. Sporting an all-composite airframe and folding wings for over-the-road trailering, the ICON A5 is intended to be a lower-cost getaway craft. A week after the show ended, EAA reported that ICON and Cirrus Aircraft (Grand Forks, N.D.) will partner to produce a significant portion of the composite airframe components for the A5, which is currently undergoing flight tests for certification. Composite structures will be manufactured exclusively at Cirrus’ Grand Forks factory alongside Cirrus’ SR20 and SR22 component production lines. Work is scheduled to begin at the end of 2012. ICON founder and CEO Kirk Hawkins said in the joint press release that Cirrus’ reputation for producing outstanding aircraft structures led to the partnership. Using the composite assemblies supplied by Cirrus and other suppliers, ICON will control all design, system integration, final assembly, finishing and testing at its Tehachapi, Calif., facility. According to the company, the first production aircraft will be completed in summer 2013.

A well-attended educational forum featured resin infusion innovator Russ Emanis of Dexell Composites (Keller, Texas) and aircraft fabricator Brian Alley of Carbon Fiber Composites Inc. (Hurricane, W. Va.). Together they discussed double-bag infusion techniques for molding structural aircraft parts without resorting to an autoclave or an oven (see this issue’s Inside Manufacturing feature, "Infusion of aerostructures: Doubling down on the details" under “Editor's Picks,” at top right). During the forum, Emanis described his Aero-Fusion automated infusion system, developed in collaboration with SYBO Composites (St. Augustine, Fla.) and Vectorworks (Titusville, Fla.). The system controls vacuum and delivers precisely mixed epoxy resin and hardener at a preprogrammed rate during infusion. The key to Aero-Fusion is Emanis’ Accu-Fusion delivery head, which mixes epoxy resin and hardener at the point of infusion. This eliminates the inevitable waste when resin is siphoned from pails of mixed resin during more conventional infusion processes. In Emanis’ process, only the feed line becomes the “hot pot.” The automated mixing head saves as much as 30 percent of infusion labor, he claims, and reduces the risk of mix-ratio error.

Alley told HPC that his appearance at the forum led to several firm orders for parts. Further, Vulcan AeroForge LLC (St. Paul, Minn.), which is developing the ION 100 LSA kit plane, has contracted with Alley to produce all of the new aircraft’s molds and parts.

Elsewhere, manufacturer Progressive Aerodyne (Tavares, Fla.) celebrated at the show its 20th year of producing the Searey amphibious LSA kit, available in either fiberglass or carbon fiber composites. Searey, which first took flight in 1992 and has a devoted fan base that loves the aircraft’s composite design, short takeoff and landing (STOL) characteristics and versatility, allows water landings and, by way of retractable gear, hard surface operations. A fast-build kit is now available for customers who want to ease construction of the craft’s wings, says the company.

The evident popularity of amphibious aircraft at the show was a boon to several suppliers that were highlighting composite floats designed to transform land-based aircraft into seaplanes. Aerocet Inc. (Priest River, Idaho), which began as a defense material manufacturer and is currently the only producer of U.S. Federal Aviation Admin. (FAA)-certified fiberglass floats in the market, according to general manager Matt Sigfrinius, showed several float models that are made in an infusion process. (Aerocet’s floats are the subject of HPC’s Focus on Design feature in this issue. See "Carbon is the choice for amphibious LSA floats," under "Editor's Picks.") The company typically uses E-glass skins over a foam core, infused with a HYDREX 100 HF vinyl ester resin supplied by Reichhold LLC2 (Research Triangle Park, N.C.). A carbon fiber-reinforced float model is available for smaller planes with less power, such as LSAs, where weight is critical. Another float OEM, Wipaire Inc. (South St. Paul, Minn.), revealed that it is beginning development of its own composite float to complement its existing line of aluminum floats.

As a follow-up to our 2011 Oshkosh coverage, HPC again visited the New Zealand Trade and Enterprise booth and encountered even more aviation entities involved in composites. With the backing of a new business partner, Composite Helicopter International (Auckland, New Zealand) returned to Oshkosh with its six-seat helicopter, the KC518 Adventourer, which features an all-composite airframe in the form of a carbon fiber-reinforced monocoque. The rotorcraft has attracted at least 15 orders, and the company envisions a “huge future” for its aircraft, due in large part to its cost-effective operation. Deliveries are planned for 2013.

New to the New Zealand contingent this year was Auroa Helicopters (Taranaki, New Zealand), with a two-seat, turbine-powered “microlight” helicopter on display that weighs a mere 310 kg/660 lb empty. The Auroa is made of carbon/epoxy prepreg, with a filament-wound tail boom, and is intended for flight instruction, commuting and recreational flight, says company owner and director of design and engineering Dick Sybrandy.

Also on hand was Giovanni Nustrini, head of Falcomposite (Auckland, New Zealand), the source of the sleek Furio carbon composite kit plane. The first Furio built in the U.S. was on display. Twelve kits have been delivered to customers, half of whom are already flying, and, Nustrini noted, “I have already sold five kits during the show.” Furio kits are available in the U.S. through Scion Aviation LLC (Loveland, Colo.), the builder of the U.S. demonstrator. Nustrini says the kit design has been evaluated by the FAA and is compliant with the Major Portion requirements of the Amateur Built Experimental Rules (49/51) that stipulate the owner/builder must build 51 percent of the aircraft. Nustrini says the FAA’s favorable ruling is key to expanding kit sales in North America.

Breakthrough “roadable” LSA builder Terrafugia (Woburn, Mass.) attended the show without its production prototype Transition, which was undergoing an expanded phase of flight and drive testing at the company’s home base. The highway-capable car/aircraft first flew successfully on March 23, and Terrafugia officials revealed that it would be ready for delivery to the first customers late this year, but a company spokesman, when pressed, would not discuss the aircraft’s composite architecture.

And OMA SUD SpA (Capua, Italy), a well-known European composites manufacturer, was on hand at Oshkosh to debut its new Redbird all carbon-prepreg composite LSA. The low-wing aircraft first flew earlier this year and is scheduled to enter the U.S. LSA market in mid-2013, says Valter Proietti, the company’s president and CEO. The Redbird’s primary and secondary structures are autoclaved carbon fiber prepreg that provides a design maximum take-off weight (MTOW) of 600 kg/1,323 lb. (An ultralight version is available with an MTOW of 473 kg/1,042 lb.) Powered by a 100-hp Rotax 912S2 engine with a two-blade prop, the plane can be fitted with a forward tricycle landing gear in either fixed or retractable format. OMA SUD, an unsung manufacturing partner of both The Boeing Co. (Chicago, Ill.) and Airbus (Toulouse, France), is better known for its Skycar five-passenger, twin-pusher, twin-boom configuration aircraft targeted for cargo, medevac and military operations as well as business and pleasure.