Among the most innovative composite parts on the eighth-generation, 2020 Chevrolet Corvette sports car from General Motors Co. (GM, Detroit, Mich., U.S.) is a curved, pultruded rear bumper beam. The design team desired a beam with curved geometry that better matched rear vehicle styling and fit in the available package space, which wasn’t generous. The manufacturing team wanted the beam assembled to the rest of the body-in-white (BIW) in the “body shop,” meaning it had to have thermo-mechanical stability to survive the 238°C bake cycle after a dip in GM’s ELPO electrophoretic rust-coating bath. The beam also had to meet required low-speed impact crash requirements and engineers wanted to reduce mass versus the metal-inert gas (MIG)-welded aluminum extrusion used on the previous-generation Corvette. Given that vehicle’s history as a composites-intensive car, a composite beam was a logical starting point. 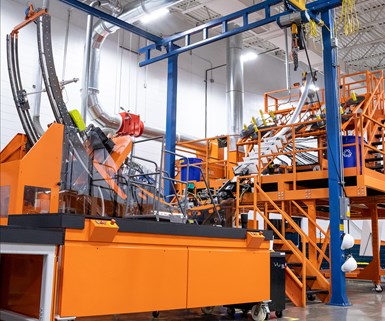 Shape Corp. is the first company in the Americas to own a radius pultrusion line developed and built by Thomas GmbH + Co. Technik + Innovation KG (TTI), and the first automotive supplier to produce commercial parts using TTI’s patented process, which overcomes many of the traditional limitations of conventional (linear) pultrusion. Source | Randy Riksen for Shape Corp.

As design work for the 2020 model got underway, the Corvette team picked 10 structural parts, including the traditionally aluminum bumper beams, that could be evaluated for potential production as new, fully carbon fiber-reinforced plastic (CFRP) parts.

“The parts we were looking at — some were straight, some were curved, some needed holes cut into them for one reason or another, but each one had to meet our dollars-per-kilogram target to be seriously considered,” explains Ed Moss, engineering group manager for the Corvette body structure. “Out of the 10 parts we initially considered, five moved to the next level of evaluation, although three eventually were dropped later in development. We ended up with two CFRP parts on the 2020 Corvette: the rear bumper beam and a removable underbody close-out panel for the center structural tunnel.”

The design team initially considered use of carbon fiber composites for the vehicle’s straight front bumper. However, for many reasons, chief among them the more stringent requirements to pass both low- and high-speed frontal barrier tests, the focus soon shifted to the curved rear beam, which had less demanding performance requirements and needed to lose more weight to accommodate the vehicle’s new mid-engine design.

“Given that we thought we might be using new technology, and the front barrier tests have so many nuances, we decided to start with the rear beam instead,” continues Moss. “The rear beam, which frames the rear of the car, is actually more important, given the mid-engine architecture, and we were willing to pay more to get more mass out of that end of the vehicle.” A curved beam was needed both to match rear styling and to maximize rear luggage space. Given its proximity to mid-engine heat, the material needed thermo-mechanical stability, ruling out thermoplastics. The beam also needed to permit a coated aluminum tow hook to be molded in, or allow a hole to be cut in the beam to accommodate a tow hook, bonded into place post mold. 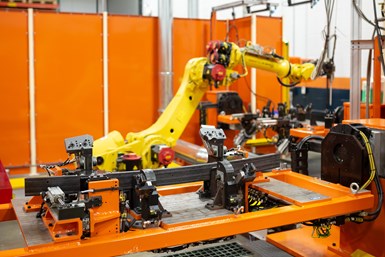 An important post-mold assembly step performed at Shape is installation of the aluminum tow hook. Once a hole is drilled and the hardware is inserted, the tow hook is bonded into the waiting beam. Source | Randy Riksen for Shape Corp.

Design work on the rear beam began in earnest even before material and process were selected. One aspect of the design that remained a constant throughout the program was the decision to bisect the hollow beam (along the length direction) via a central web, essentially creating two interior chambers. This feature was critical to keep beam thickness and weight low while providing required mechanical performance for crash testing. As would be expected, the central web’s presence affected process selection.

As they considered how to produce first the straight front and later the curved rear bumper beam, the team evaluated several composite-forming processes judged capable of producing a two-chamber hollow beam. Among these were:

Interestingly, one team member had a process preference from the beginning.

“I’d wanted to use pultrusion on the Corvette for at least two models, but hadn’t found the right application,” recalls Chris Basela, Corvette body structure lead engineer. Basela had worked with Tier 1 supplier Shape Corp. (Grand Haven, Mich., U.S.) on previous Corvettes and other programs, and was impressed with the company’s ability to produce complex, curved bumper beams in aluminum alloys and advanced high-strength steel. Shape designs, engineers, and produces metallic, plastic and composite products, and is known for its expertise in energy management. The company already had pioneered several metallic bumper-beam technologies that improved performance at lower weight.

In turn, representatives from Shape had met with German machinery OEM Thomas GmbH + Co. Technik + Innovation KG (TTI, Bremervörde, Germany — see “Curve in the road: First curved pultruded auto parts”), which had invented a  process and machine to produce curved 2D and 3D profiles via pultrusion. Shape was already in discussions with TTI to purchase a machine and license the technology when the Corvette opportunity came up. 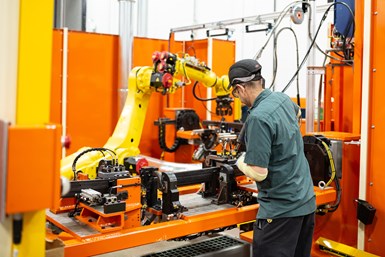 Next, fasteners and brackets that will support the completed bumper’s crash cans are installed on the beam. Shape uses a multilayer barrier solution — comprised of strategically placed materials and coatings — to ensure the beam’s carbon fiber reinforcement doesn’t contribute to galvanic corrosion, while also minimizing mass and cost. Source | Randy Riksen for Shape Corp.

As Shape waited for its new radius pultrusion machine to be built, GM, Shape and engineered fabrics supplier Vectorply Corp. (Phenix City, Ala., U.S.) began evaluating and characterizing various fiber/resin combinations (See “Material Choices for the Corvette rear bumper beam”). For each candidate, the team modeled performance via finite element analysis (FEA) using GM’s beam design, then molded test plaques using Shape’s vacuum-infusion system at its Grand Haven lab. Next, specimens were cut and small-scale tests were run to correlate predictions against measured results, helping the team gain confidence with its engineering assumptions. Additional plaques of the most promising candidates were molded and sent through the ELPO line at GM’s Bowling Green, Ky., U.S. plant where Corvettes are assembled.

Extensive investigations of fabric architecture helped the team understand what would and would not work in pultrusion — particularly radius pultrusion. Numerous fabrics were studied, including weaves and non-crimp fabrics (NCFs) in fiberglass, carbon fiber and carbon/glass combinations.

This bumper beam is the world’s first radius pultruded automotive part, and the first such part produced in North America in any industry.

“We liked the performance NCFs gave us because — since they’re stitched — fibers don’t shift during processing, which means higher stiffness and strength at the same areal weight, better drapeability, plus higher FVFs [fiber-volume fractions] in the final part,” Basela explains. “We decided to fine-tune our performance with unidirectional tows.”

“While we liked the cost of all-glass fabrics, going that route created a heavier beam to meet performance objectives, so we ended up with all-carbon,” Moss adds. Final fabric selection included a double bias, a warp triaxial and two warp unidirectional NCFs, most in small tows, and all in standard modulus with glass veils. Final FVF averaged in the mid-50% range.

Additionally, the team evaluated many polyurethane (PUR) resins to find a candidate ductile enough to pass crash testing, thermally stable enough to survive ELPO and chemically compatible with structural adhesives used to bond the beam to the BIW.

Spanner in the works

Next, near-full-size beams were produced on TTI’s demonstrator system in Germany for crash testing and the ELPO line, GM’s electrophoretic rust-coating bath. Things were going as expected until beams went through e-coat in Bowling Green, which is when issues were discovered.

“We started seeing blisters on almost every beam we sent through the line,” Basela recalls. “They weren’t just aesthetic problems that could be refinished; the blisters were pushing fibers out of the way and causing delamination issues. Oddly enough, the issue wasn’t confined to one or two areas, but rather, blisters could show up in almost any location on any beam.” This issue led to an intensive second study of alternative resin systems from several suppliers. More PUR resins were evaluated, as was epoxy, vinyl ester and some hybrid systems. Again, candidate materials were modeled, molded and tested; promising candidates were scaled up to near-full-size beams to be sent for more crash and ELPO testing.

Interestingly, the resin eventually selected had not shown outstanding performance in preliminary tests, but it aced ELPO. Crestapol 1250 is an off-the-shelf, peroxide-cured polyurethane-acrylate copolymer developed by resin supplier Scott Bader Co. Ltd. (Wellingborough, U.K.) as an adhesive and later modified to become a molding resin (see side story “Material choices for the Corvette rear bumper beam” for more on this resin system as well as the NCF fabrics used). The total system of resin/reinforcement offered the best balance of crash performance, ELPO survivability and mass/cost reduction with acceptable processing times.

This bumper beam is the world’s first radius pultruded automotive part and the first radius pultruded part produced in North America in any industry. The profile is produced using about 75 bobbins of materials. Production speed is said to be comparable with linear pultrusion — roughly 31 centimeters per minute. To date, GM has filed one and Shape four patents for innovations on the application. The final beam is 2.2 kilograms lighter than the previous aluminum extrusions, yet met all design, engineering, and manufacturing targets. To date, the beam has earned two awards from the Society of Plastics Engineers (SPE, Danbury, Conn., U.S.): the Process/Assembly/Enabling Technologies category winner and the Vehicle Engineering Team Award (for the whole Corvette vehicle/team) at last November’s 49th Automotive Innovation Awards Gala.