From fabrics to resins, a number of new combinations of materials went into the making of the world’s first curved pultruded automotive part.
#weaving #adhesives #outofautoclave

The 2020 MY Chevrolet Corvette sports car from General Motors Co. (GM, Detroit, Mich., U.S.) sports many composites firsts. One of the most notable is the first automotive use of the radius pultrusion process to produce a rear bumper beam that shaved 2.2 kilograms of weight off the previous MIG-welded aluminum bumper beam on the outgoing model. Source | General Motors Co. 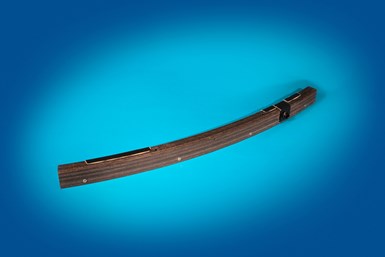 However, the innovation isn’t solely process related; an interesting combination of carbon fiber fabrics and a hybrid resin system not commonly seen in automotive also were key to the success of this application, which knocked 2.2 kilograms of weight off the benchmark metal-inert gas (MIG)-welded aluminum extrusion used on the previous-generation Corvette, while still passing all required design, performance and dollars-per-kilogram cost targets.

“Right from the start, we did extensive work on fabric architecture,” explains Toby Jacobson, Shape’s plastic engineering manager for the plastics and composites division. “We quickly found out that some fabric types worked and some didn’t work in the radius pultrusion process. We fine-tuned our structure with UD [unidirectional carbon fiber] tows.”

Working with engineered fabric supplier Vectorply Corp. (Phenix City, Ala., U.S.), the team from GM and Shape evaluated numerous carbon fiber-based non-crimp fabric (NCF) products. “We went with NCFs because the stitch yarns give these fabrics drapeability and suppleness that are key to achieving curved structures in radius pultrusion,” notes Jacobson.

“We do a lot of business in conventional pultrusion and find that NCFs provide many benefits for that process that woven fabrics cannot,” adds Trevor Gundberg, P.E., Vectorply VP of composite engineering. “For example, with woven fabrics, you can’t get a ±45-degree fiber orientation in your profile because when you put tension on it, it’s not stable, so the scissor fibers will move and lose their orientation. With stitched fibers, the stitch yarn itself is designed to take the load in the direction of pull, which is why it’s important to get the right stitch and yarn pattern.”

Four fabrics were selected for the bumper beam and are used to create a seven-layer laminate.

Vectorply reports achieving higher stiffness and strength, especially in the dry state, with NCFs than with weaves of comparable areal weights, which translates to being able to use a higher portion of the ultimate strength and stiffness of the fiber. “We typically see a 25% increase in nominal strength and a 10 to 15% increase in modulus for NCFs versus comparable weaves of equivalent areal weights,” Gundberg adds. “Furthermore, you can also get higher FVFs [fiber volume fractions], so your parts perform better at the same weight or you have opportunities to make parts thinner and lighter.”

As the team from GM and Shape began evaluating different fabric architectures using the preliminary design that GM engineering had already developed for the bumper beam, they used a proprietary laminate-analysis code called VectorLam, developed by Vectorply to estimate the performance of different fabric laminate schedules. The cloud-based, multiplatform code, based on classical laminate theory helped the team to more quickly review multiple types and orientations of fabrics in different laminate configurations to understand their contributions to GM’s stiffness, strength, mass and cost targets. As work proceeded with fabric evaluations, materials that looked promising from finite element analysis (FEA) results were then supplied by Vectorply to Shape for testing and validation. In the end, four fabrics were selected for the bumper beam and are used to create a seven-layer laminate consisting of:

“From our end, we didn’t really need to develop any custom fabrics for this project,” recalls Gundberg. “The biggest thing we concerned ourselves with was creating products with the correct width that had the correct overlap, that were placed correctly in the die, and that all the materials could be pulled through the die without tearing or creating resin-rich areas.”

Another interesting aspect of the final fabric architecture for the Corvette bumper beam, and one that Shape already has filed several patent applications on, is the use of fluorescent stitch yarns as tracer yarns on the edges of each unique fabric used to produce the beam. When a black light is applied, beams can be quality-control tested to ensure that the right fabrics in the right areal weights are in the right locations in the laminate stack.

In parallel with fabric evaluation, the team also looked at several polyurethane resin systems to see how they would perform in the bumper beam. While pultrusion can theoretically use any thermoset resin, and even has been adapted to run some prepolymerized thermoplastics, it’s commonly used with polyurethane systems, which tend to provide a good balance of properties and allow for fast processing.

The resin that provided the best combination of processability, performance, processing rate, cost and mass was a polyurethane-acrylate hybrid developed by Scott Bader Co. Ltd.

The team knew one of the project’s key challenges would be finding a resin system to survive GM’s ELPO electrophoretic rust-coating process, since the decision had been made for the bumper beam to be installed in the body shop — meaning with the body-in-white (BIW). After a dip in the chemical bath with the rest of the BIW, the beam would need to survive a 238°C bake cycle without warping. None of the urethane resins that were tested passed ELPO, forming blisters that pushed toward the edge of near-full-size bumper beams, which led to fiber displacement and delamination. That caused the team to go back to the drawing board and evaluate other resin systems, including epoxy, vinyl ester and several hybrid systems from different suppliers. The resin that provided the best combination of processability, performance, processing rate, cost and mass was a polyurethane-acrylate hybrid developed by Scott Bader Co. Ltd. (Wellingborough, U.K.) and supplied by Scott Bader North America (Stow, Ohio, U.S.).

The resin is supplied as a one-part, peroxide-cured system called Crestapol 1250. “Typically, we preblend the polyol and isocyanate to form a fully reacted prepolymer and then we end-cap it with acrylate,” explains Jeff Starcher, Scott Bader business development manager for the urethane/acrylate market. “Because it’s not cold blended or grafted, it won’t phase-separate. The system is styrenated, which helps with blending and viscosity control as well as crosslinking. Adding the peroxide catalyst at the customer completes final crosslinking of the acrylate.” The company has commercialized a number of grades with glass transition temperatures (Tg) ranging from 105° to 300°C, and says it can custom-formulate unique grades with a Tg anywhere in between although, reportedly, the grade used for the Corvette bumper was an off-the-shelf formulation.

The forerunner of this resin technology was developed by Scott Bader for the Royal Navy in the mid-1970s as an adhesive for composite-bodied mine-sweeper ships. Derivatives of that adhesive are still used in significant quantities in the marine industry because the material has really good fracture toughness, good chemical resistance, it bonds well to carbon and glass fibers, has good moisture resistance, can easily be applied over gel-coated materials and can be formulated for high UV stability.

In the late 1990s, that interesting mix of properties got scientists at Scott Bader wondering if the base resin used in the adhesive could be reformulated as a molding resin. They tried doing just that and produced a number of formulations, but all suffered from stability issues, which caused the technology to be shelved until 2005. At that time, another chemist gave it a shot and found a way to make the chemistry work as a molding resin, with the first grades commercialized in 2013.