Founded in 2014 by CEO Fedor Antonov, Anisoprint (Esch-sur-Alzette, Luxembourg) is one of a growing number of technology companies advancing 3D printing of composites with continuous fiber. It prefers, however, to be known as a pioneer in moving additive manufacturing (AM) away from metals to composites.

“The directional properties of composites are an advantage, not a drawback,” says Antonov. “Unidirectional carbon fiber composites are stronger and lighter than metals. Conventional manufacturing and metals-based AM consider composites’ directional anisotropy as a drawback that needs to be mitigated. But Anisoprint’s approach exploits this anisotropy, orienting and placing fibers to precisely meet structural loads, significantly reducing part weight while retaining high strength and stiffness.”

Antonov points out that conventional composites manufacturing has typically used practices from the metals industry, including quasi-isotropic laminates, drilling holes and mechanical fasteners. “These nullify the weight and performance advantages of composites,” says Antonov. “Anisoprinting technology provides a much faster and more flexible, automated method for production.” It also offers a way to achieve the more efficient structures now being output by topology optimization and generative design software.

“Natures’ most efficient structures, like trees and bone, exploit directional properties, orienting load-carrying material primarily along load paths,” Antonov asserts. However, these types of topology optimized structures are difficult to produce. For example, lattice structures which have enabled strong and lightweight payload fairing adaptors for spacecraft, are typically produced using filament winding. However, a topology optimized version, offering an additional 30% weight savings, is no longer easy to produce with conventional composite processes, nor with more recent automated fiber placement (AFP).

“Conventional anisogrid filament wound structures are achieved using grooves in the tooling, and relatively low fiber volume fraction in the ribs allows intersecting them,” says Antonov. “These types of anisogrid structures were our original objective. But this does not work using AFP because your fiber volume content is always constant, and intersecting ribs without cutting the fibers or local thickness variations is not possible.”

(Note: For more study on this, see https://www.researchgate.net/publication/321081593_Anisogrid_Payload_Adaptor_Structure_for_Vega_Launcher)

Fiber steering is a technique currently being applied to composite production using AFP which allows fibers to be applied in curvilinear paths — AFP has traditionally used straight linear paths. Fiber steering allows the fiber path, and thus the mechanical response of the composite panel, to be optimized to exhibit higher performance than with conventional laminates. In one example, this approach produces a composite substrate panel for a spacecraft solar array that has a 44% higher first natural frequency (minimizes amplitude of vibrations and allows faster damping) than an equivalent conventional panel with straight fiber paths and the same mass. Alternatively, a lower weight panel could be achieved for the same frequency performance.

Fiber steering enables the design and manufacture of parts like structural panels for satellites or high-speed machine components with a very high performance. It is a repeatable process, achieving a high and consistent quality and enables innovative new designs. It can also be used to reduce weight for the same geometric design. SOURCE | “Fibre-Steering technology for advanced composite panels” (original link is given here but is no longer available via esa-tec server:  http://www.esa-tec.eu/space-technologies/from-space/fibre-steering-technology-for-advanced-composite-panels/)

“Anisoprinting is a combination of lattice structures and fiber steering that is used to achieve topology optimized parts,” says Antonov. “This is a key technology for printed composites. For example, How do you build a fuselage panel for a commercial aircraft which has cutouts or holes?

He gives three different techniques, which are used to produce composite samples of the same thickness and weight, each with CNC machined holes (see table below). He notes that in compression testing, the sample made with fiber steering has an ultimate compression load twice that of a quasi-isotropic composite (“black aluminum”) and 30% higher versus a constant stiffness UD laminate. “Thus, fiber steering is a powerful tool,” says Antonov. “Anisoprinting will move toward AFP fiber steering as we increase fiber volume and productivity, and AFP will move toward us with more flexibility.

The “flexibility” that Anotov refers to is a measure of how much it is possible to place a fiber along any path in three-dimensional space. Arevo, another company who is commercializing continuous fiber 3D printing, claims it has this type of flexibility. “Arevo’s technology is not very different compared to AFP companies like Coriolis, Automated Dynamics, Electroimpact, etc.,” says Antonov. “They have merely miniaturized it and instead of using a thin and wide tape they use a thick and narrow one with a laser AFP head. It’s all the same.” Note that Arevo’s 3D printing technology has been robot-based from the beginning. How will Anisoprint’s technology change as it moves to robotic platforms?

Antonov and his co-founders (Andrey Azarov, Alexey Khaziev, Mikhail Golubev and Zafer Gürdal) were at a new university in the western part of Moscow called Skolkovo Institute of Science and Technology (Skoltech), which was established in 2011. In 2014, Antonov was working to build Skoltech’s new center for composites technology and began developing 3D printing. The director of the composites center at that time was Zafer Gürdal, who left in 2015, returning to the McNair Center at the University of South Carolina. The latter is now known for its R&D in composites and continuous fiber 3D printing.

“We decided to spin off from Skoltech when Zafer Gürdal left,” Antonov explains. “We had developed a prototype CFC print head by the summer of 2015. Our next goal was to develop a desktop printer.”

Anisoprint introduced its Composer desktop printer in 2017. Similar to Markforged continuous fiber printers, Anisoprint’s Composer uses two print nozzles: one for the continuous fiber reinforcement and one for the plastic matrix. Housed within a glass print chamber, Composer’s glass print bed can be heated up to 120°C, which allows minimizing effects from shrinkage. Currently it is available in two sizes:

With a standard nozzle diameter of 0.4 millimeters, Composer’s print speed is cited as 10-80 millimeters/second unreinforced and 1-20 millimeters/second with continuous fiber reinforcement. Anisoprint can extrude many plastics including PLA, PETG, ABS, nylon and PC. It can reinforce these with its composite carbon fiber (CCF) materials and recently launched a composite basalt fiber (CBF) print material.

However, Anisoprint is quite different from other continuous fiber 3D printing technologies because it first impregnates continuous fiber reinforcement with a thermoset polymer and then extrudes this into the melted thermoplastic filament during printing. “This two-matrix approach ensures low porosity, good adhesion of fiber to polymer and excellent mechanical properties,” Antonov asserts.

He continues, “The inventor of the filament wound anisogrid for the Proton M launcher payload adaptor, V.V. Vasiliev, who is on our board of advisers, actually showed that this idea of using dual-matrix thermoset-thermoplastic (TS-TP) materials has benefits over using a single thermoset or thermoplastic matrix. Thermoset matrix materials have issues with brittleness, so that the matrix starts cracking much earlier than the fiber fails. Vasiliev proved he could mitigate this with dual matrix approach.”

The thermoset Anisoprint uses is a multi-component epoxy and final printed laminates have a fiber content of up to 45% as tested by the Technical University of Munich (TUM). 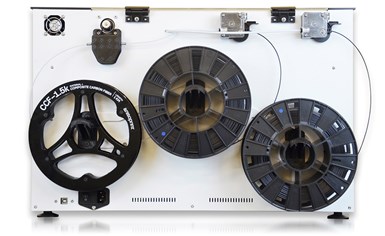 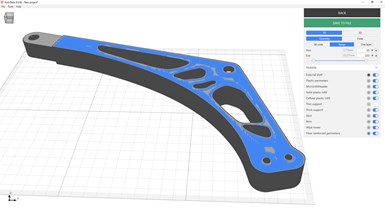 Composer desktop 3D printer available in three sizes (A4, A3, A2).

“The robot has a different printhead because you need to move the head to fit and reach into constrained spaces during printing,” Antonov explains. “In a 2D plane, this isn’t an issue. But in 3D space, you need to put fiber where there is already some structure. The ideal accessibility is achieved with a needle. So, we need a compromise, a more needle-like print head.”

He notes other differences, such as industrial controls. “The desktop printers are based on consumer electronics, such as  Arduino. But for larger, robotic systems, you need industrial motion control and interfaces and all kinds of in-situ quality assurance, such as laser measuring, which Markforged has on their larger machine. You also need to modify heating/cooling sensors and controls.” He adds that all of this takes time and resources, and their   priority for the last two years was to develop the desktop machine, but now they  are working on the robotic systems too.”

Antonov describes Anisoprint’s software as flexible, enabling both beginners and advanced users. “The software is easy to use, but It’s important that R&D labs have the ability to change print parameters,” he explains. Indeed, customers include the MFPA research institute (Weimar, Germany), Brightlands Materials Center (Geleen, Netherlands) and Technical University of Munich as well as manufacturers including Schunk Carbon Technology, Airbus and BMW.

Anisoprint has 3D printed composite microsatellite parts with up to 45% weight reduction vs. lightweight metals.

Anisoprint, which touts itself as an open materials platform, is also looking to develop more partnerships for new print materials and parts. In June, it announced an agreement with Malta-based Thought3D to use the latter’s Magigoo adhesives. These stick the first print layer to the printbed, preventing part peel-off. “Bad first layer adhesion is one of the most common issues that can ruin printed parts, and not necessarily at the beginning of the build,” Antonov explains. “This is especially important for our open materials system, where the customer can choose from different types of thermoplastics. Each requires different print parameters and is why we’ve introduced several first layer settings in our Aura slicer software. This is also why we will include Magigoo sticks in every Composer box to make sure our customers will have a proper solution in hand for good first-layer adhesion.”

Anisoprint says its technology can be applied in many fields, from aerospace to consumer products and healthcare. One example is an aircraft seat support that bears 1.5 tons of load with a 40% weight reduction versus aluminum. With 100 such fixtures in an average single-aisle passenger plane, this weight reduction can add up to significant savings in fuel and overall operational costs.

Another case is a piston for forming yogurt pots, used in a dairy production line. Such pistons are typicaly made from milled polyamide,  but replacing such parts when they are damaged takes three months, with the production line shut down for the duration. The part printed by an Anisoprint Composer reportedly has a longer lifespan and reduces production line downtime from 3 months to 24 hours.

Anisoprint met the requirements for a dairy production line component with its 3D printed composite piston but with a drastically reduced replacement time.

“Anisoprinting enables the design and production of optimal composite structures through composite fiber co-extrusion,” says Antonov. “Thermoplastic polymers are reinforced with continuous fibers, consolidated and cured within a single-stage, fully automated process, with no post-processing required. As a result we get parts that are several times stronger, lighter and cheaper than traditional metals and plastics and superior also to conventional composites.”