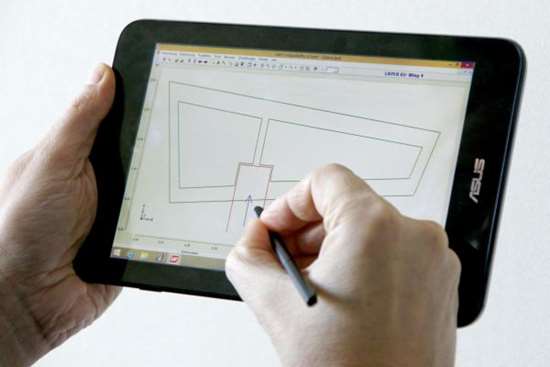 LAP Laser (Lüneburg, Germany) began developing point and line lasers in 1984 and now provides complex, high-precision system solutions for industrial companies all over the world. “We first introduced Airbus to our laser projection system COMPOSITE PRO, which they could use to position the CFRP [carbon fiber reinforced polymer, i.e., prepreg] layers, in 2003. At that time, the Airbus site in Stade [Germany] was just starting to produce components for the Eurofighter," recalls LAP product manager Harald Grimm. He adds that Airbus was delighted with the product, and has been purchasing its laser projection systems from LAP ever since, noting there are over 100 COMPOSITE PRO systems being used in Stade alone, and many hundreds more in other Airbus sites around the world.

The COMPOSITE PRO projectors are connected to a central server in a control cabinet, on which all of the projection data is saved. The server is connected to several clients, which can be controlled using a keyboard and mouse, a touchscreen, or now – in the most recent development – with a Windows tablet PC. "This makes work much easier for users," says Grimm. "They are no longer being dragged away from the production process and their important routine. Instead of having to go to the stationary client PC, which can sometimes be some distance away, staff can now select the next production step straight from their tablet PC."

The display can show the current work situation as an outline drawing or in different 3D views. Users can switch between projected shapes instantly, without any waiting time at all. The intuitive software control is also proving particularly popular. Reportedly, all of the functions can be mastered in less than an hour.

COMPOSITE PRO software is compatible with all of the usual computer aided design (CAD) data formats used in the industry. But now, to make it even easier to integrate the system into individual IT landscapes, LAP has developed an Application Programming Interface (API). This is a software package which companies can use to program their own applications so that the projectors can be connected to their own control systems. "More and more aircraft companies ideally want to integrate the laser system straight into their quality management system," says Grimm. "LAP is therefore looking into adding cameras to the laser system in the future, which would document every step with photos. The aircraft company could save them in a database and prove that the production steps are correct at any given time."

Airbus Stade, located 45 km west of Hamburg, is a production plant with 1,500 employees. Here, the company produces fuselage sections for the Eurofighter, wings and fuselage segments for the twin-engine wide-body A350 aircraft, and the vertical stabilizer for the A380, all of which rely on carbon fiber-reinforced plastic (CFRP). At Stade, the carbon fiber prepreg layups are applied to numerous tools, some 35m long by 7m wide, and featuring very complex details to provide precisely tailored strength and stiffness at minimum weight.

Working with Airbus has boosted LAP's growth, especially in the Asian market. "Particularly for smaller companies in the aircraft industry, investing in the laser system pays for itself very quickly, as it can increase production rates by up to 100%," says Grimm. Furthermore, these companies can quickly manufacture components with complex geometries, they are no longer reliant on expensive templates, and they can reduce waste and reworking.

A case in point closer to home is LA Composite (Prague, Czech Republic), a manufacturer of composite parts for aircraft, machines and rail-bound vehicles, including components for primary structures such as fuselage, wings and tail using CFRP prepreg. The dependability of these parts, in particular, is crucial. Development manager Petr Prucha wanted  to drastically reduce waste and thus cut cost. He recalls, “We wanted a proven technology. LAP has fulfilled all our demands. The references in the aerospace and composite industry, for example at Airbus, convinced us."

Using COMPOSITE PRO has produced savings in two ways: drastically reduced scrap during production and more than 50 percent labor time saving during the production of CFRP parts. The LAP projectors enable technicians to lay the individual CFRP layers of the parts exactly according to the design specifications. "In the meantime the geometries of the components that we produce, for example for helicopters or airplanes, have become so complex that the production would be almost impossible or at least far slower and with a high scrap rate without laser-based projection," he explains.

Prucha details the work process for the projector-aided production of CFRP aerospace parts, “We create a 3D model with desired contours in our design software SolidWorks (Dassault Systèmes, Velizy-Villacoublay, France). Patterns for projection are exported from SolidWorks to LAP’s COMPOSITE PRO software, which transmits the data directly to the projectors. They show the user the exact position and form of the CFRP layers, embedded parts and sandwich cores during production. The laborious and very time-consuming manual measurement with clumsy templates has been completely eliminated from our production thanks to the LAP projectors. The integration of COMPOSITE PRO into our existing production processes was extremely simple. We could start work immediately after the installation of the projectors."

"COMPOSITE PRO has not only improved the efficiency of our production, but has also led to a noticeable increase in the quality of our products,” says Prucha. “A particular problem is the exact positioning of objects with very complex geometries of the parts," he explains. "Before we installed COMPOSITE PRO we had to work with large tolerances, and consequently with larger inserts whose position was not always as exact as our engineers had planned them. The consequence was far more scrap, a poorer product quality and less complex parts. But thanks to the LAP laser projectors, that is now all in the past. With COMPOSITE PRO we have finally been able to use smaller inserts that now make modern, highly complex forms possible." Prucha concludes, “We now want to use this feature also in the manual final trimming of the parts."