Thermwood 3D-printed and trimmed five-foot-tall sections that were then bound together and bolted to form a complete female mold. The entire mold section, made of four printed pieces, weighs 4,012 pounds and required 65.5 hours to print.
#layup

CNC machinery manufacturer Thermwood Corp. (Dale, Ind., U.S.) recently printed several sections of a 51-foot-long yacht hull mold to demonstrate how only a single mold may be needed for the manufacture of larger vessels, such as yachts. The printed sections of this test mold were made from Techmer PM carbon fiber-reinforced ABS due to its physical properties and — compared to other reinforced thermoplastics — its relatively low cost.

Thermwood reports that it has already 3D printed a full size pleasure boat master pattern which has been used to produce multiple production boat hull molds. While this demonstrated the value of AM for small boat tooling, says the company, much larger vessels — like yachts, for example — need only a single mold, and it is found desirable to print the mold itself rather than print a plug or pattern from which multiple production molds can be made.

To demonstrate this concept, Thermwood says it printed and trimmed a 10-foot section from a 51-foot-long yacht hull mold using its 10 x 10 LSAM MT vertical layer printer. The mold was reportedly printed in five-foot-tall sections, which were then bound together both chemically and mechanically using high-strength polymer cables into two mold halves. The two mold halves were then bolted together to form a complete female mold for the yacht hull. The entire mold section, made of four printed pieces, weighs 4,012 pounds and required 65.5 hours to print. 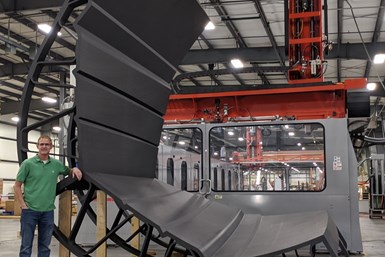 Thermwood points out important design aspects, including each mold  section’s molded-in rocker, which act as natural rests that enable the mold to be rolled over or tilted 45 degrees to either side during the layup process. Another design feature is the set of molded wedges clamped to the rockers to hold the mold in the desired position. Once the hull has been laid up and fully cured, the mold is rolled to level and the printed wedges are clamped to both sides. Then, says Thermwood, the two mold sides can be unbolted and slid apart to release the finished boat hull.

While the test mold used carbon fiber-reinforced ABS, the company notes that certain thermosets will work directly on the ABS molded surface using just traditional mold release practices, while other, solvent-based thermoset materials could chemically attack the ABS polymer. To prevent this, Thermwood ran a series of experiments with several protective coatings, including traditional mold gel coats. Regardless of the results, while it appears that this approach will work today for certain thermosets, Thermwood notes that it would be ideal to develop a low-cost polymer that is chemically-resistant to the other thermoset solvents and eliminate the need for a protective coating altogether.