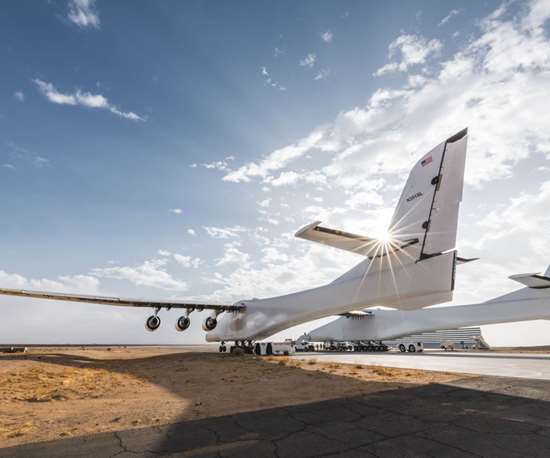 On January 6 and 7, the Scaled Composites LLC (Mojave, CA, US) test team successfully executed a low speed taxi test of the giant Stratolaunch aircraft. During this initial taxi test, the aircraft moved down the runway under its own power for the first time. These first test points have demonstrated the fundamental ability to control the aircraft speed and direction on the runway.

Scaled Composites has been working with Stratolaunch for the past five years designing, building, and testing the world’s largest aircraft. Microsoft co-founder and businessman Paul Allen’s mission for Stratolaunch is developing an air launch platform to make access to space more convenient, reliable, and routine.

What is it like to move the world’s largest aircraft? Joe Sweat, project pilot, commented, “It was a lot less intimidating once we had it out there, in terms of how much runway we take up. From a visual standpoint, we had a lot more room than I was anticipating. Getting the airplane moving under its own power was really interesting – just seeing and feeling how the nose wheel steering reacts and how the brakes respond to the inputs.”

“Later taxi testing will include faster speeds and more challenging steering and braking tasks, all in preparation for first flight. It was exciting to see this magnificent machine on the runway for the first time!” says Brandon Wood, test conductor.

Scaled Composites is a specialty aerospace and composites development company offering design, build, and test capabilities. Founded by Burt Rutan in 1982, Scaled has averaged one first flight of a unique, new airplane per year. Scaled Composites is a wholly owned subsidiary of Northrop Grumman Corp. (Falls Church, VA, US). For more information: www.scaled.com