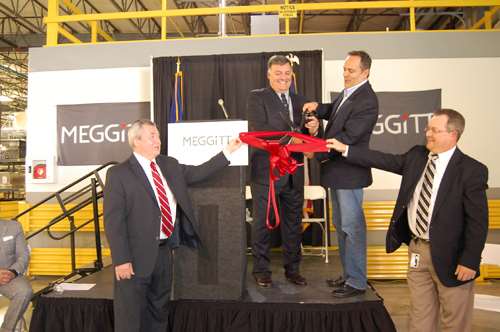 Meggitt Aircraft Braking Systems (MABS; Danville, Kentucky), a division of the UK-based Meggitt group, marked a significant growth in its operations on Oct. 18 with a ribbon-cutting ceremony and facility tour attended by Kentucky Governor Matt Bevin and other dignitaries. The event was held to dedicate a 66-job, $9.3-million expansion of its Danville manufacturing and distribution campus.

"For the past decade, Meggitt Aircraft Braking Systems grew as a substantial employer and a major player in Boyle County's economy. This project represents the company's second expansion and an ongoing commitment to central Kentucky," Gov. Bevin said. "The expansion we dedicate today also exemplifies the Commonwealth's increasing role in the global aerospace industry. Corporate partners like MABS recognize Kentucky offers an ideal location and workforce for aviation and aerospace manufacturing. I look forward to seeing MABS continue to grow in the years ahead."

"The MABS Danville campus has available land to accommodate growth in creating a single, global production and distribution center with significant economies of scale. Future plans call for additional building expansions in 2018-20, with additional carbon furnaces and support equipment, at an anticipated investment of $100 million," said MABS president Luke Durudogan.

MABS initially located its carbon brake manufacturing facility in Danville in 2005. In 2011, it added an assembly and distribution operation, bringing its total Kentucky investment to approximately $70 million. MABS currently employs some 185 people in Danville.

In related news, Meggitt Polymers & Composites (MPC), a business unit of Meggitt PLC, has signed a lease to relocate to a single 120,000 sq ft facility on Top Gun Street, less than a quarter mile away from its current location at Heater Court in the Sorrento Valley/Mira Mesa area of San Diego, California.

The relocation and expansion coincides with the ramp-up of the F-35 combat fighter aircraft program for which Meggitt manufactures engine components and other structures. However, the larger facility includes capacity for expansion into the high-growth market of composite components for commercial aircraft.

Mike Louderback, MPC Site Leader, says, “Aircraft manufacturers are in a race to convert as much metal to composite as possible because the reduction in weight saves fuel and production costs are much less.”

Meggitt’s advanced composites capability was expanded dramatically by the acquisition of two large, highly capable businesses at the end of 2015. “We now have amongst the widest range of composite processes in-house in our market segment, which means we can are well-positioned to accommodate any geometric challenge our customers put before us,” says Louderback.

Meggitt Polymers & Composites highlighted one of the world’s first rotating composite parts it makes for GE at the recent Composites and Advanced Materials Expo (CAMX) in Anaheim.  The product — a flow path spacer — is 50% lighter than the titanium unit it replaces and 50% cheaper to manufacture.

The relocation investment of approximately $10 million will result in over 200 new jobs by 2020 for composite technicians, program managers and manufacturing and quality engineers. Meggitt Polymers & Composites expects the Top Gun Street construction to commence in November, 2016, with a phased occupancy to be completed by second quarter, 2017.  Architectural and construction firms have been designated for the project.