Sara Black joined CompositesWorld in 1999 and for the next 20 years embodied the intelligence, curiosity, respect, diligence and accuracy that the publication strove to deliver to its audience.
#iacmi #workforcedevelopment #infrastructure

Sara Black, veteran writer and editor for CompositesWorld over two decades, passed away on Friday, May 29, after a several-years-long bout with cancer. Sara was 66 and died at her home in Morrison, Colo., U.S. Sara is survived by her husband of 40 years, Ken Black.

During Sara’s tenure with CW, from 1999 to 2019, it was nearly impossible to pick up a copy of Composites Technology, High-Performance Composites or, eventually, CompositesWorld, without seeing her byline on a story. During her time with CW, Sara held the titles of Technical Editor and then Senior Editor, and in many ways she came to represent CW in the composites industry. Sara was well-known and well-respected as a technically astute and thorough journalist, as passionate about writing about composites as she was composites manufacturing itself.

“If we are lucky, each of us, in our time, is granted the good fortune to work with someone in whom we place complete trust, respect, faith and admiration,” says Jeff Sloan, CW editor-in-chief. “And upon my arrival at CW in 2006, Sara became that person. She helped me understand — very patiently — what composites are and why they are important. She was the eyes and ears and memory of CW and was, without question, one of the most capable and diligent journalists I have known. Her writing was second to none. On top of that, and most importantly, she was just a good human being. I am certain that she did not have a mean bone in her body.”

“Of all the SAMPE people I have met, Sara Black was unique,” says Gregg Balko, outgoing CEO of SAMPE. “Always inquisitive, always ready to learn something new about the composites industry. Even more important, Sara was a genuine, kind soul whom you could trust. This friend of SAMPE's will be missed.”

Sara, in a 2013 remembrance, recalls applying for the writing job at CW in 1999, having just been laid off by her previous employer. She admitted to Judy Hazen, the founder of CW, that she knew nothing about composites. That did not matter because what Sara did know was how to ask questions — which she did as well as anyone — and soon, as she noted in her farewell column in 2019, she was writing about rowing shells, pultrusion, countertops, tooling prepreg, bridge support structures, 787 components and more.

“Sara and I both started writing for Composites Technology and High-Performance Composites in 1999,” says Dale Brosius, CCO of IACMI and CW columnist. “I was considered the industry veteran, so she leaned on me to validate claims of uniqueness and clarify materials or technologies as her stories developed. It wasn’t long before I was the one eagerly reading any story Sara wrote, as I knew I would definitely learn something new with each one. Beyond being a colleague, she was a great friend and a joy to be around, whether one on one, or with a group around a table having drinks or dinner following a long day at a trade show or conference. She was smart and funny, even self-deprecating, and a great listener, making her one of the most accessible people in our industry.”

As Sara’s career with CW continued, she developed an invaluable institutional memory of not just the magazine, but of the industry itself. Indeed, she bore witness to and documented a particularly dynamic period of growth and maturation in the composites community. “I came to composites,” Sara wrote, “just when it was starting to transition from a fragmented cottage and craftsmanish industry into a real source of high-performance materials that was to be taken seriously.”

To her colleagues at CW, Sara was more than a great researcher and writer, but an uncommonly kind and thoughtful friend who proved always interesting, interested, generous, sincere and passionate about her work. At trade shows in particular, at the end of the day when CW’s editors met to compare notes about technologies and ideas discovered, Sara was famous for her excited pronouncements: “Oh! Oh! You will never guess what I found today...” 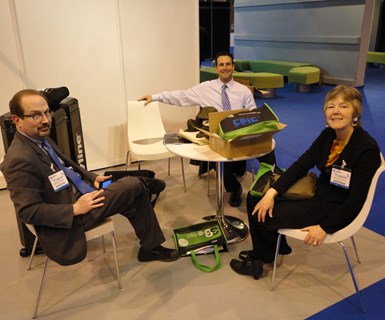 “The first time I met Sara was at the 2000 Global Outlook for Carbon Fiber conference I organized for Intertech in San Antonio,” says Scott Stephenson, director-Strategic Initiatives & Events for CW. “As always after, she was bright, energetic and curious. She asked me a lot of questions during the breaks, although not so much after the speakers’ talks. She mostly listened intently and took notes. Like many people in the industry back then, Sara had a formal education in science, but not in composites. However, she was a good writer, and eager to learn and ask questions. These qualities, combined with her genuine interest in the topics she wrote about always became evident to the people she interviewed. Her smile and laugh could light up a room or a booth. Everyone in our composites world loved her genuine enthusiasm and respected her hard work.”

Says CW senior editor Ginger Gardiner: “Sara was an incredibly good technical writer but never lauded herself. Instead, she was humble and full of grace, very kind and thoughtful of others. She was an easy person to be with, and truly missed by so many in the industry when she stepped back from the magazine. So many would ask after her at every trade show and conference. Sara made the world a better place.”

Ryan Delahanty, CW’s publisher, says: “Sara was a fantastic work colleague and an even better friend. She had a wonderful ability to make each person around her smile. Whether it was a funny comment or an encouraging word, she brought out the best in people.”

Mike Musselman, former managing editor of CW and the person who worked with Sara the longest, says, “Sara was an editor’s dream: If I needed a last-minute replacement feature? She could turn in five days what might consume another for weeks. Good news or bad, she always told me the truth. I could trust her. So could her sources. Top drawer? She loved this industry and its people. And the love came back. I will not see her like again. She was worth any two other writers I worked with. That's not a knock on others. It’s just how good she was.”

Sara was the youngest of three children and grew up in a small town in rural western New York located near the eastern shore of Lake Erie. Her father was an engineer for GE in Erie, Pa. Sara was the president and valedictorian of her high school class and kept in touch with many of her classmates throughout her life. She attended the State University of New York (SUNY) at Fredonia where she earned her undergraduate degree in geology, and then traveled west to Colorado State University (Fort Collins) for a masters degree in engineering geology. Sara met and married Ken, her husband of 40-plus years, while she was in graduate school. After graduate school, Sara worked as a geologist for a number of environment engineering companies and wrote technical reports involving hazardous waste investigations. She went on to write for environmental technical journals and then, finally, in 1999, found her true calling at CompositesWorld. 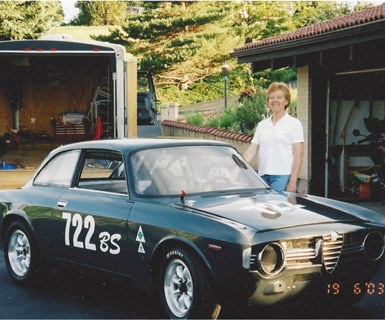 Sara enjoyed playing the piano, gardening and watching birds. Having lived in several locations across the U.S., Sara could identify almost any bird by its song, a skill taught to her by her father when she was a child. Sara’s father was also a fan of car racing, and Sara remembered traveling to Watkins Glen, N.Y., to watch SCCA and Formula 1 races as a small child. Sara always enjoyed cars and could easily identify them by make and model. While living in California, Sara and Ken started racing vintage cars, a hobby they continued for 20 years. Sara raced both sedan type and formula type cars at venues across the U.S., and she and Ken developed many friendships with fellow racers. Sara and Ken owned airplanes for much of their married life, and enjoyed flying across country, often with their dog in the back seat. Sara took flying lessons to help Ken with the flying tasks.

Sara struggled with a rare form of breast cancer for more than four years, and endured many rounds of chemotherapy and radiation.