The Cray X features a frame made with SGL Carbon carbon fiber and aids workers when lifting loads of up to 28 kilograms for up to eight hours.
#trends #electronics #composites4_0

German Bionic (Augsburg, Germany), a developer of robotic exoskeletons, presents  the fourth generation of its smart power suit, Cray X, which is made of carbon fiber composites. The power suit aids workers when lifting heavy loads of up to 28 kilograms by actively amplifying their movements and thus protecting the lower back from excessive strain. The suit can support lifting heavy loads for up to eight hours with a single, exchangeable battery pack.

In addition to a carbon fiber frame, German Bionic says the Cray X  has an integrated cloud interface in order to easily connect to the industrial Internet of Things (IoT) and the Smart Factory devices by means of standard APIs, improving productivity as well as health and safety. The suit also provides automatic OTA software updates and predictive maintenance. 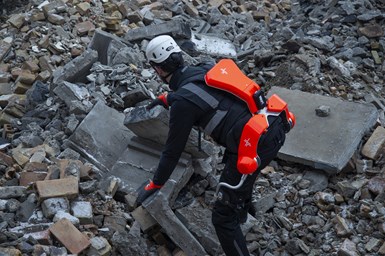 Further, German Bionic says its flexible Robotics-as-a-Service (RaaS) pricing model makes the Cray X affordable for most companies. Further, the Cray X reportedly can save costs by significantly reducing the risk of injury and the associated expenses of employee absenteeism. The company also notes the suit’s service levels, which can be optimized according to the needs of the user, regardless of his or her size. The Cray X starts at as little as €699 per month.

“Regional cooperation with technology leader SGL Carbon, which lent us significant support and expertise in the development of the carbon fiber load-bearing structure, also underscores Germany’s position as a high-tech location for the future,” says Armin G. Schmidt, CEO of German Bionic. “Particularly system-relevant industries, such as logistics and freight, which have been under enormous pressure since the beginning of the pandemic, can now strengthen their employees backs with our new devices.”

German Bionic now offers an additional accessory, the Cray Visor, which combines augmented reality capabilities with protection against airborne health risks. The wireless connection between the Cray X, the German Bionic IO cloud-based IoT suite and the Cray Visor is said to allow instructions and other useful information to be displayed on the visor screen.