The Brockworth, England facility will include a full production facility for the company’s all-composite aircraft propeller blades.
#generalaviation #braiding #lockheedmartin

On Dec. 4, Dowty Propellers (Gloucester, U.K.), a business of GE Aviation, inaugurated a new facility in Brockworth, England that will serve as the company’s headquarters, U.K. repair and overhaul center and the full production facility for its aircraft propeller systems featuring all-composite blades. The new center is expected to be fully operational in the first half of 2020.

The Brockworth facility replaces the company’s original headquarters and blade manufacturing facility in Gloucester that was destroyed by fire in February 2015. Technologies will be incorporated for production, control, repair and in-service support of Dowty’s propeller systems, which are used on turboprop and turboshaft engines powering regional airliners and military airlifters, along with amphibious aircraft and marine hovercraft. The company is transferring its current equipment, located at an interim blade manufacturing facility in Mitcheldean, U.K. 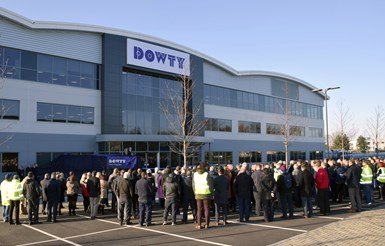 Dowty Propellers inaugurated its new production facility, headquarters and repair operation in Brockworth, England, on Dec. 4, 2019. The event was attended by the company’s customers, government representatives and its employees. Source | Dowty Propellers

The U.K. Dowty Propellers Repair and Overhaul (DPRO) center — which previously had operated at a separate location in Gloucester — will now be integrated into the new Brockworth facility. There also are DPRO centers in Sterling, Virginia, U.S., and Brisbane, Australia, as well as a team of field service engineers that are deployed around the world for field repairs. 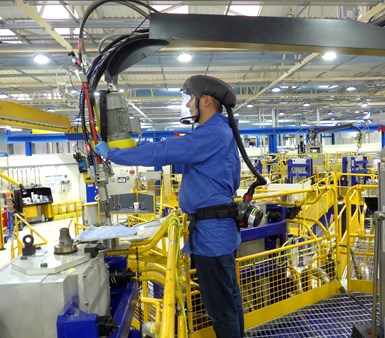 “The new facility offers a unique opportunity to realize the benefits of the significant investments made in recent years in the new technologies and advanced manufacturing techniques that will support the development of more-efficient and lower-noise propellers,” says Gary Elliott, CEO of the Aerospace Technology Institute, which creates the technology strategy for U.K. aerospace, and funds research and development.

“We are pleased to support the DigiProp program and Dowty Propellers’ state-of-the-art research to find ways to increase the efficiency and reduce the noise footprint of what is already an inherently efficient propulsion system. Propellers have a great future as we need ever more efficient aircraft, including their application in hybrid and electric-powered solutions,” Elliott adds.

“Dowty Propellers’ efforts over the past four years not only represent its commitment to the exciting future of propellers, but also its commitment to providing world-class products and solutions for its global customer base,” says Brad Mottier, GE Aviation’s vice president and general manager of business and general aviation & integrated systems. “With this state-of-the-art facility, Dowty Propellers is poised to continue its leadership in this industry with sustainable, smart technologies and a driven, dedicated workforce.”