The aircraft, called EcoPulse, is based on Daher’s TBM platform, with a distributed hybrid propulsion system developed by Safran.
#sustainability #airbus #regulation

Daher (Paris, France), Airbus (Toulouse, France) and Safran (Paris, France) have announced a collaborative partnership for the design and development of the wing-mounted EcoPulse distributed hybrid propulsion demonstrator, with a maiden flight scheduled in 2022.

“Reducing the environmental impact of aircraft is a priority for the industry as a whole,” says Nicolas Orance, senior vice president of aerospace and defense BU at Daher.

Safran will provide the distributed hybrid propulsion system; Airbus will have responsibility for the aerodynamic optimization of the distributed propulsion system, the installation of high energy density batteries and the use of those batteries to power the aircraft; and Daher will use its TBM platform as the basis for the component and systems installation, flight testing, overall analysis and regulatory construction. 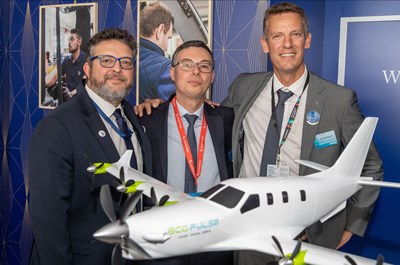 The purpose of the collaboration between Airbus, Safran and Daher is to validate technologies designed to reduce CO2 emissions and noise pollution, and to create new uses for air transportation. Source | Airbus

The distributed hybrid propulsion system from Safran will consist of a turbogenerator (meaning a combined turbine and power generator), an electric power management system, and integrated electric thrusters (or e-Propellers) including electric motors and propellers. The electric thrusters will be integrated into the EcoPulse wing and will provide propulsion thrust, and will reduce wing surface area and wingtip marginal vortices and drag.

“Safran has developed a technology roadmap for the installation of electric thrusters on aircraft. EcoPulse offers us an excellent opportunity to evaluate and identify the specific features expected by this market, particularly in terms of new hybrid propulsion aircraft projects,” says Stéphane Cueille, head of R&T and innovation at Safran.

“This distributed hybrid propulsion demonstrator is a very important step towards preparing the certification standards for a more electric aircraft. It also gives us the opportunity to improve our simulation models and consider their use on larger aircraft,” says Jean-Brice Dumont, executive vice president of engineering at Airbus.