Whiskey Alpha eight five is 8.5 meters long, but is said to be scalable from 6 to 12 meters. Its advanced carbon fiber composite hull, called “Sea Blade,” is said to provide greater strength to weight than traditional aluminum or FRP hulls made from other materials.

The hull form is the product of a decade of research and development, with the goal of designing a watercraft that provides greater stability while achieving higher average speed than a comparable deep-V hull.

“The co-founders of The Whiskey Project commissioned the design based on their 20 years’ defense experience as tactical maritime operators, and they intimately understood what the capability gaps were in the existing craft being used globally,” says Brett Van Munster from Van Munster Boats. “They knew the current boats were simply not fit for purpose. … Operators need watercraft that offered a higher level of seakeeping and safety but also high-speed offshore capability in all sea states, as well as low speed maneuvering for the boarding, recovery or disembarking of ships.” 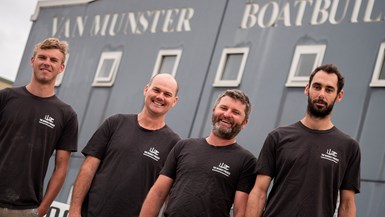 Van Munster boats, established in 1988, is a second-generation family-owned and run business that has earned a reputation for innovative custom builds, including composite construction. The company’s main business focuses on 18- and 16-foot skiffs, for which it has been the international Class builder for the past 14 years,

“One of the key challenges that always arise on tight time frames is material procurement. Fortunately, we have good suppliers such as ATL that we can rely on to deliver,” says Van Munster.

According to ATL Composites, the efforts paid off, and Whiskey Alpha eight five was the center of attention at Pacific 2019, the biennial international maritime expo that took place Oct. 8-10, 2019.

“There has been huge interest following the event from both domestic and international defense delegations … and we are looking forward to the next phase of The Whiskey Project,” says Van Munster.

The “Whiskey” nomenclature for the project is derived from the NATO phonetic alphabet, where “W” denotes the military water operators and “Whiskey” is their callsign.