To build these subsystems, which include the reflector dishes themselves and various other composite parts, Steven Payette, composites manufacturing engineer for MDA Sainte-Anne-de-Bellevue, says the company uses “a building block style” approach.

The work at MDA’s Sainte-Anne-de-Bellevue facility focuses largely on engineering and design. MDA designs 3D models for each antenna, engineers the parts and designs the tooling. Most of the composite parts are produced out-of-house with industry partner STELIA North America (Mirabel, Quebec, Canada), which manufactures the composite parts for the satellites. The parts, which are made from Kevlar or aluminum honeycomb core with carbon fiber prepreg skins, are then brought in-house, where MDA performs room temperature bonding to assemble the myriad composite structures﻿ together, followed by precision trimming, critical alignment, the addition of metallic fasteners or fittings, and a battery of tests to ensure flight readiness.

Building block approach. Satellite parts, such as this reflector dish supporting structure, are cut from a flat sandwich construction panel made up of core material between two carbon fiber skins. Source | MDA

“So what we’ll get from STELIA is a flat panel with a bunch of strange shapes cut out of it,” Payette explains (see photo, above). “STELIA will machine through the laminate and leave the core in place, and we’ll cut out the pieces — almost like a model airplane, where all the parts come on a plastic rack and you’ve got to cut them out.” 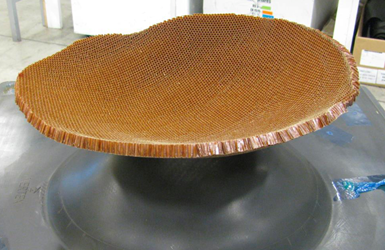 Vented core. Each cell of the honeycomb core must be vented to create a pathway for air to escape in the vacuum of space. Source | MDA

According to Payette, pieces are cut from these flat panels and used to assemble such structures as towers, bases and backing structures for reflector dishes. The position and the shape of the parts is what drives the performance. MDA designs the parts to be oversized and then performs custom dry fitting and precision machining to get everything in the exact position needed for the final shape for each unique antenna structure. 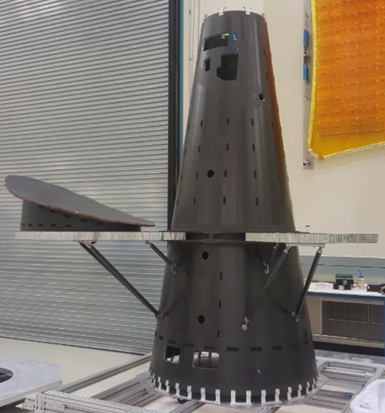 “The ratio is something like three engineers per one guy on the floor building things,” Payette says. “Every time we get a new product, somebody with a background in either electrical engineering or physics does the RF design and goes through, ‘what do the shapes of these things need to be?’ Then you have a mechanical designer who goes through, ‘how does this work from a packaging point of view to get it into the spacecraft and onto the spacecraft bus?’ Next, a structural engineer asks, ‘what does it have to look like to survive launch and to survive operation?’ Someone with a background in thermal engineering says, ‘what's it going to look like at 150ºC or -150ºC?’ And on down the line until finally, you get to the person who says, ‘okay, how are we going to put it all together?’”

Precision is a key part of MDA's process for each part. Because the parts will ultimately operate in the vacuum of space, honeycombs are vented so every hole is connected to the next and no air is trapped in the part when it is launched into space. “We have to pierce holes in between every cell of the core,” Payette says. “Otherwise [the vacuum] would just pop the skins off.”

While many of the components start from the standardized shapes﻿ cut from composite panels described above, each antennae subsystem is unique. “What’s interesting about our work is that there’s little volume. We make one of everything we do, more or less,” Payette says. “The unique part for every assembly is the reflector dish itself.” 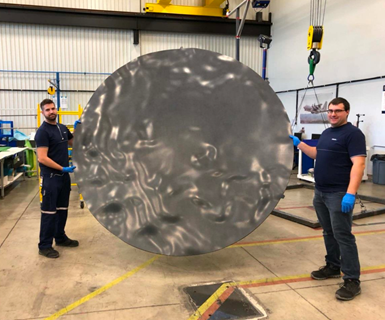 Reflector dishes. Unique tooling must be designed for each geosynchronous satellite dish in order to create the contours needed to target specific geographic locations. Source | MDA

Many of the satellites that MDA provides antennas for are placed in what’s called a geosynchronous orbit. Geosynchronous satellites stay in the same place relative to the Earth and service a specific area. While smooth reflectors are used for steerable satellite dishes, contours are designed into the surface of geosynchronous satellite reflector dishes to concentrate or disperse radio frequency (RF) waves based on targeted geographic locations. Multiple dishes may be used to zero in on specific regions within the targeted area.

“By engineering these shapes into the reflector dishes, we add or remove power to the different regions,” Payette says. “Each reflector dish has to be unique, and the shape changes for every mission.”

MDA designs the reflector dish mold. The mold is manufactured by PCM Innovation (Quebec, Canada) and is then sent to STELIA to build the dish. The tooling for the reflector dishes has to be exact. MDA’s products have small dimensional tolerances because the final shape affects the satellite’s electrical performance. Molds are made one of two ways: They are either machined from monolithic graphite blocks, or are laid up using prepreg or a dry fiber infused with an epoxy.

“As you can imagine, we are the mold supplier’s favorite customer, because we need new molds all the time,” Payette says. “Unlike an aerospace company pulling hundreds of parts off the same mold, we generally use each mold for only one part.”

“We use composites specifically because they're very dimensionally stable.”

In addition to the tooling, the material used also plays a large role in the ability of each reflector dish to precisely target specific locations. The materials used to fabricate the reflector dishes and supporting structures need to be very stable over a wide temperature range. According to Payette, the satellites can experience temperatures anywhere between 175ºC and -175ºC.

“We use composites specifically because they’re very dimensionally stable,” he says. “We need something that doesn’t move.”

Testing is another big part of the work done at MDA’s Sainte-Anne-de-Bellevue facility. Each product goes through thermal testing of hot/cold temperature cycling to simulate the extreme fluctuations in temperature the satellite will experience in space. Mechanical testing is also performed and includes vibration and acoustic testing. The majority of the testing is performed in-house. MDA has thermal vacuum chambers up to 13 by 13 feet, and the company has two vibration tables for vibration testing.

A great deal of custom work goes into each product designed by MDA. The company recently built and launched the RADARSAT Constellation Mission (RCM), a program consisting of three identical Synthetic Aperture Radar (C-Band) Earth observation satellites designed for remote sensing of the Canadian north, and has also created parts for the International Space Station (ISS) through the Canadian Space Agency and NASA. For some of MDA’s projects, prototypes are created for testing ahead of time, but Payette points out that even then, all flight products go through an aggressive testing campaign.

“Nobody likes to spend money to send things into space without knowing that they're already going to work,” he says.