The LITA 3D printing system from the University of Delaware shows potential for in situ cure for high-performance carbon fiber composite parts.
#trends

“We call it one-step 3D printing,” says Dr. Kun Fu, assistant professor at the University of Delaware and an author on the study. Called the localized in-plane thermal assisted (LITA) 3D printing method, the system comprises an all-in-one printhead mounted on a robotic arm that includes carbon fiber dispensed from a spool, a guiding bar, a liquid resin nozzle and an electric heater. As the fiber is placed onto the part surface, liquid resin is sprayed onto the fibers and is immediately followed by the heater, which, Fu explains, both aids in infusion and in curing of the part. Fu adds that the heating process reduces the viscosity of the room-temperature resin, helping it to infuse into the fibers without need of a vacuum along capillaries, or tube-shaped gaps, between the fibers. Depending on the needs and size of the part being manufactured, Fu says, the temperature of the heater can be increased or reduced to control the viscosity of the resin. 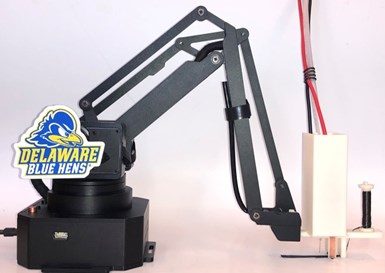 This method reportedly enables nearly simultaneous wetting and curing of continuous fibers with thermoset resins, with potential to quickly producing 3D composite components with complex geometries and the high mechanical properties that come from continuous fibers and high-temperature thermosets. The researchers have also demonstrated the system can be used for horizontal and vertical printing, Fu says, and on planar or curved surfaces, adding to the system’s flexibility.

“The technique has been very promising so far,” Fu says, “and as far as we know, we’re the first to publish a technique like this.” According to Fu, the researchers are in the process of obtaining a patent for the technology. 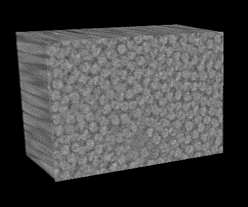 In addition, the University of Delaware and partner KAI (Dallas, Texas, U.S.) recently received a NASA grant to use the LITA 3D printing method for manufacture of continuous carbon fiber-reinforced composite components for thermal protection systems on NASA spacecraft and lander systems. Fu says that the LITA 3D printing system was chosen for its ability to print with high-temperature resins.

Currently, the technology has only been demonstrated at a small scale – 3K carbon fibers were used for the study – but Fu says the team is working to scale up the robotic system to enable use of wider carbon fiber tows for larger components. The researchers are currently looking for companies interested in collaborating on scale-up and subsequent commercialization of the technology.