Formula SAE’s 2020 in-person events have been cancelled this year, but a virtual competition will be held on June 19. Source, all images | Lawrence Technical University

Before tomorrow’s automotive engineers are able to figure out the next fastest, or most fuel-efficient, or safest vehicle design, they first need to learn how to build a car.

Formula SAE (FSAE) is an international collegiate Formula-style car design and engineering competition first developed in 1981 by SAE international (formerly known as the Society of Automotive Engineers) as a way to teach automotive engineering skills to college students. “There was a concern within the automotive industry and manufacturing in general, that there wasn't a lot of student interest in cars at the time,” explains Steven Rehak, product engineer at Detroit Flex Defense (Troy, Mich., U.S.) and FSAE alum. “So the OEMs, mainly Ford, GM [General Motors] and Chrysler at the time, came together and developed this program, and they used the open wheel car as a tool so students could have fun while learning engineering skills.”

The cars are open-wheeled, open-cockpit vehicles, similar to those raced professionally in Europe’s Formula 1, and, in today’s competitions, composites are featured prominently in FSAE designs. In the decades since its inception, the program has grown, with thousands of students from hundreds of schools pitting their cars against one another in competitions around the world. According to SAE International, the Formula SAE brand has expanded internationally to include more than 20 annual competitions, many of them hosted by engineering societies and private businesses. In Europe, the competition is called Formula Student. In addition to the Formula SAE-related competitions, SAE also hosts sibling competitions including Aero Design, Baja SAE, Clean Snowmobile, Formula Electric, Formula Hybrid and Supermileage.

Lawrence Technical University modifies the design and materials used in its Formula SAE cars based on how the vehicles perform in the annual collegiate competition. Pictured are the team’s 2018 (left) and 2019 (right) vehicles on the university campus.

In 2020, the coronavirus pandemic has moved all U.S.-based, in-person competitions online for a virtual FSAE event to take place June 19. In addition, several universities plan to host autocross “shootouts” throughout the year, which are low-pressure time trials where drivers navigate a set course one car at a time. Typically, however, there are three annual competitions in North America: FSAE Michigan at Michigan International Speedway in Brooklyn, Mich., FSAE California at AAA Speedway in Fontana, Calif., and Formula North at Jukasa Motor Speedway in Hagersville, Ontario, Canada. The largest of these is in Michigan, with more than 120 universities from eight countries competing over a four-day period. The competition is broken down into two categories: Static events (Manufacturing Cost Report, Vehicle Design Report and a Business Segment presentation), and Dynamic events (Acceleration, Skid Pad, Autocross and Endurance). “At the end of the competition, all the events are scored and teams are tallied accordingly,” Rehak says.

But long before these cars ever hit a racetrack, whether real or virtual, they have to be designed and built. Like Formula 1 and other formula-style racing competitions, Formula SAE provides design parameters for vehicles, although there is plenty of freedom for creativity and ingenuity. Vehicles may be powered by electric engines or internal combustion engines, and they can be manufactured with composites or metals. All must follow the weight, size and design guidelines that SAE International releases each year. Some parts may be carried over from the past year’s vehicle, but each car must comprise at least 60-70% new materials, according to Rehak.

LTU has been competing in Formula SAE since the competition’s start in 1981. Today, LTU’s team breaks down to about 25 students per year, ranging from undergraduate freshmen to graduate-level students, mostly mechanical engineering majors, with some students coming from electrical engineering or robotics, though Rehak says that students in other disciplines are always encouraged to participate. Most of the students are college seniors, like Rehak and McCann were, using the competition as their senior project.

FSAE isn’t just an extracurricular activity, however. At LTU, students typically sign up for a three-semester class starting with an introductory class in the spring – overlapping the current year’s competition – with students working through the summer and fall to design the next year’s vehicle.

LTU’s Formula SAE team comprises about 25 students per year, ranging from college freshmen to graduate-level students. Pictured are the members of the 2019 team.

The breakdown of roles on a team varies from school to school and team to team, Rehak says, though some roles are similar between teams. For example, he says, most teams have an overall team leader that corresponds directly with the faculty advisor, plus someone to handle fundraising and sponsorship activities – Rehak’s role during his competition year. There are also team leads for fabrication, vehicle engineering and vehicle manufacturing. On LTU’s team, the team is large enough to further break down into sub-team leaders, with team members in charge of specific vehicle components such as the powertrain or chassis. “Different teams have different leadership structures,” Rehak says.

He adds, “As alumni members, [McCann and I] try to pass along as much knowledge as possible to the current team, and help the team grow. We help with recruiting, fundraising, sponsorship items, timelines, deadlines … A lot of it, the team has to learn on their own. But we are there for assistance and support when needed.” 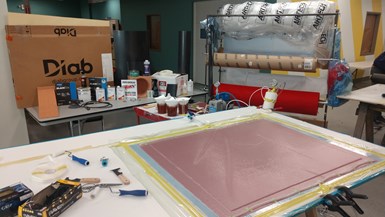 Over the past few years, the LTU team has brought as much of its manufacturing processes in-house as possible.

“It’s really a 365-day-a-year program,” Rehak says. “After the rules come out for SAE, they pretty much give the students a six- to eight-month time period to build a vehicle.”

Students start with the previous year’s vehicle, first figuring out what worked and what didn’t, and then they choose which parts to optimize for the next vehicle. Though the timelines vary by year and by school, Rehak says there tend to be about two to three months allotted to vehicle design, followed by manufacturing, and ultimately leading to a month or two of testing before the competition season begins in the spring.

“We’re not starting from the ground up every year,” McCann adds. Rather than redesign the entire vehicle, the team picks certain components to focus on for the upcoming year. “The vehicle transforms over the years,” McCann says.

Materials and manufacturing processes change from year to year based on the current design and resources available. However, in a typical LTU vehicle, McCann says, the body structure and aerodynamic components such as the airfoils are composite, while the chassis and components for the vehicle’s suspension and engine are metallic. Depending on the year, composites may also be used in the seat, kick plate and, sometimes, the steering wheel. “We are also looking at exploring other options like carbon fiber wheels,” McCann says. Some teams, he acknowledges, have the resources to build even larger structures such as carbon fiber composite monocoques. 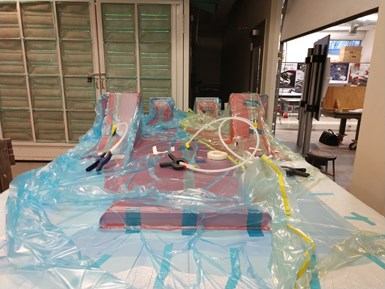 To design the parts, the team uses CAD software from Solidworks (Concord, Mass., U.S.) and NX (Siemens, Waltham, Mass., U.S.). “There are a lot of considerations we look for,” McCann says. These include designing and testing parts that can both perform well in competition and withstand the rougher parking lot asphalt that the car is tested on. As an example, McCann says he worked with distributor Composites One (Arlington Heights, Ill., U.S.) to find a material for the bottom of the vehicle’s undertray to help with abrasion resistance. “We ended up using a material called Innegra [Innegra Technologies; Greenville, S.C., U.S.], which I didn’t even know what it was at the time,” he says.

McCann says one of the goals for the 2020 design was to take more weight out of the car, which included decreasing the size of the undertray. A carbon fiber composite undertray is shown here after infusion.

The LTU team manufactures as many parts as possible in-house at the lab on campus, but McCann admits that they sometimes have to get creative with the spaces they learn in. Vacuum infusion for the undertray is done in the laboratory’s common area; curing of prepreg parts is done in an environmental chamber the team is given permission to use by the civil engineering department. In previous years, members of the team have traveled to various shops around the Detroit area (like Sankauer Composite Technologies in Sterling Heights) and Zagata Technologies in Fowlerville) where fabricators taught the students how to build the parts and allowed them to use their equipment. “Over the years, we’ve kind of made a hybrid of a bunch of different shops’ techniques to manufacture our parts in-house,” McCann says. 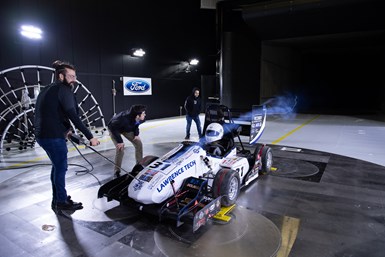 Members of the LTU team test the 2018 vehicle design at a Ford wind tunnel facility in Michigan. Morgan McCann is pictured far left.

Certain elements tend to be reused year to year, such as wheels, tires, shocks, the engine or seatbelts. But most of the car is remanufactured every year using new materials. For LTU’s 2020 vehicle, the team decided to focus on making the vehicle more aerodynamic and lighter weight, while carrying over last year’s designs for other elements like the front and rear wings. According to McCann, LTU’s 2018 vehicle had superior handling and performed well in the autocross event, while the 2019 vehicle performed better in the endurance category. “This year, we’re trying to combine all of these features,” he says.

After the teams put in the work to build their car, they then put their vehicle to the test, both on the track and through additional tests such as wind tunnel testing. LTU uses Siemens’ Star CCM+ to virtually model wind tunnel testing, and in February 2020, McCann says the LTU team took its 2018 vehicle to the Ford Driveability Test Facility in Allen Park, Mich., to validate the design. The 2018 vehicle was chosen for wind tunnel testing because its body and aerodynamics were similar to the design of the 2020 vehicle that was being built. “This was very interesting, as it showed us a lot of things the model could not, and allowed us to experience the flow structures around the vehicle firsthand,” McCann says.

McCann and Rehak both found the lessons learned from Formula SAE invaluable to their education and career in the automotive industry after college.

Pictured here, Morgan McCann sits in the 2018 competition vehicle, with Steve Rehak seated on the tire. Rehak, who holds a bachelors of mechanical engineering degree from LTU as well as a degree in business administration from Walsh College, is now a product engineer at Detroit Flex Defense. McCann received a bachelor’s degree in mechanical engineering with an automotive engineering concentration from LTU in 2018, and is currently pursuing a master’s in mechatronics engineering degree. He is also employed by General Motors as part of the graduate rotational program. While part of LTU’s Formula SAE team, McCann helped develop the first aerodynamic package in the history of the university.

“From my perspective,” Rehak adds, “there were two elements that really stood out to me. One, you see how many layers of companies there are within the supply chain of the composite industry that all help and contribute to making a part. That was something that I had never really thought about before. Two, you have the opportunity with FSAE to go through the whole manufacturing process and learn the different ways to do a product layup, whether it be vacuum infusion, or using prepreg carbon fiber and using an oven system. You learned the different processes you could use to end up with relatively the same part, just based off what your resources are at the time.”

Rehak and McCann also both acknowledge the benefits gained from making connections with like-minded students from other schools at the competition itself. Hopefully, by the time the spring 2021 competition season arrives, the next group of next-generation automotive engineers will be able to gather to test their vehicle designs in person once again.