The evolution of composites in NASCAR

There’s something uniquely American about stock car racing. In the U.S., the sport has origins tied to the distribution of bootleg whiskey, known as moonshine, during the 1920s in the Prohibition era. Bootleggers would lighten and modify their vehicles for increased speed and handling in order to evade police. Fascination with these souped-up street vehicles led drivers to begin racing them for prize money and bragging rights. The races became a popular form of entertainment, and the tradition eventually became an organized sport.

The National Association for Stock Car Auto Racing, better known as NASCAR (Charlotte, N.C., U.S.), officially got its start in 1948 when the organization was established to create a standardized set of stock car racing rules and regulations. Today the sanctioning body oversees more than 1,500 races at various tracks in the U.S., Canada, Mexico and Europe.

Lightweighting and improving a car’s speed go hand-in-hand, so naturally NASCAR vehicles have used composites for their inherent light weight, strength and stiffness for decades.

In the early days of stock car racing, the vehicles were limited to factory model cars. Eventually, NASCAR allowed the cars to be modified to increase durability. Over the years, the number of modifications increased, and the practice wove its way into the culture of the sport. Each season, NASCAR evaluates its rules and regulations, often making changes with the goal of improving safety or making the cars more competitive. NASCAR vehicles are checked prior to each race for compliance with the organization’s ever-evolving regulations. NASCAR dictates which materials can be used for the cars, as well as where and how they are employed.

Lightweighting and improving a car’s ﻿speed go hand-in-hand, so naturally NASCAR vehicles have used composites for their inherent light weight, strength and stiffness for decades. A carbon fiber part manufactured at the same thickness as a steel part offers four times the strength at one third the weight. NASCAR teams, constantly looking for opportunities to legally remove weight from their vehicles, have increased use of composite materials in the sport over the years.

In addition to lightweighting, composite parts also offer other advantages. Tremendous heat is generated in brakes during racing, and under the hood temperatures can reach 300-400ºF. Carbon fiber’s heat-resistant qualities can help reduce fatigue on engine parts. 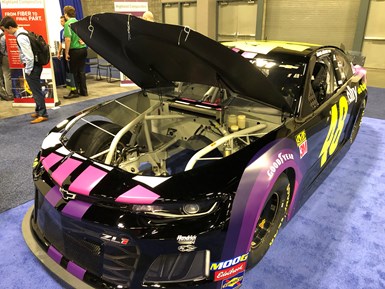 Carbon fiber components. This 2019 car built by Hendricks Racing for driver Jimmie Johnson has 35% more carbon fiber than his 2002 car, which had a few carbon ducts but was almost entirely metal. The 2019 car has a carbon fiber hood, part of the nose, trunk, seat, bumpers and some small parts. The largest carbon fiber part is the seat.  CW photo | Scott Francis

In the current Generation 6 vehicle specification (commonly referred to as Gen-6) used in the NASCAR Cup racing series, several body parts are made of composite materials. Gen-6 cars comprise a steel tube frame chassis and a mix of carbon fiber and stamped steel body panels. The car’s hood and rear deck lid are made of carbon fiber with Kevlar incorporated to decrease splintering and shattering in the event of a crash. The front and rear fascia also are made of composites. Other examples of composite components include cooling hoses, gear cooler housings, brake ducts and battery cases. When it comes to engine components, the emphasis on composite parts is placed on components mounted higher on the engine, which lowers the vehicle’s﻿ center of gravity. Carbon fiber seats are also often used. The current cars weigh 3,200 pounds (1,451 kilograms) without driver and fuel.

A new seventh-generation vehicle specification is currently in development for NASCAR, and many teams expect the so-called Next Gen car to allow for even more composites, possibly even an all-composite body. There is also speculation that the current body-on-frame construction of NASCAR vehicles would be replaced by a tub that would likely also incorporate carbon fiber.

According to Jeff Andrews, director of engine operations at NASCAR Cup Series team Hendrick Motorsports (Charlotte, N.C., U.S.), the Next-Gen car aims to be lighter than the current Gen-6 car and will likely be in the 3,000- to 3,100-pound range. “Implementation of all-composite bodies is in the very near future,” said Andrews during a keynote at the Society for the Advancement of Material and Process Engineering (SAMPE) 2019 Conference and Exhibition in May 2019. “The sport could see widespread adoption of composite bodies within 2-4 years.” He added that a full composite body system could provide a more consistent surface over the length of the vehicle and possibly allow for more streamlined vehicle build times.

… hanging a body comprising pre-fabricated composite panels on a chassis takes considerably less time than what is needed to form, shape and weld a steel body.

Though not yet introduced into NASCAR’s Cup Series, composite bodies are already being tested at other levels of NASCAR competition. An all-composite body was first introduced to NASCAR’s national competition level in three races during its Xfinity Series competition in 2017. In 2018, the composite body style was used in all races in the series except for the superspeedway races (Dayton International Speedway and Talladega Superspeedway). The Xfinity composite body is made up of 13 interlocking composite panels held together by flanges. Essentially, the panels lock and bolt into place, which eases replacement of damaged panels.

According to Brett Bodine, senior director of team efficiencies at NASCAR Research and Development Center, hanging a body comprising pre-fabricated composite panels on a chassis takes considerably less time than what is needed to form, shape and weld a steel body — approximately two days compared to nearly two weeks.

“We feel quite confident that it’s going to save every team owner money in the area of hanging bodies on their racecars,” he says. “Probably the big savings is going to be in the repair. These panels unbolt from each other and you can bolt a new one right back on. With that reduced repair time we feel that teams will enjoy potentially needing less vehicles to run the entire series.”

Another feature of the Xfinity composite body is a raised honeycomb pattern on the panel surfaces in areas where teams may be tempted to illegally modify the car’s aerodynamics. Any sanding or massaging of those raised areas would be easily noticeable as an infraction.

Five Star RaceCar Bodies (Twin Lakes, Wis., U.S.) produces the composite panels used in the Xfinity composite body. The company’s composite bodies have been used in the NASCAR K&N Pro Series since 2015, which provided a proving ground for NASCAR for the body style before allowing them to run in a national series.

In addition to lightweighting, NASCAR’s goal with the Next Gen specification is to lower the cost of competing in NASCAR, opening the door for vehicle manufacturers beyond the big three — Chevrolet, Ford and Toyota —﻿ that dominate the sport. John Probst, NASCAR vice president of innovation and racing development, has said that the Next Gen bodies will likely be constructed from a flange fit composite material — meaning that the panels are interlocking — as with the cars used for the Xfinity series.

A prototype Next Gen car built by Richard Childress Racing (RCR, Welcome, N.C., U.S.) was test-driven by RCR driver Austin Dillon in October 2019 and then by Team Penske driver Joey Logano in December 2019. While development and testing continues, the Next Gen shell and chassis is expected to debut in 2021.