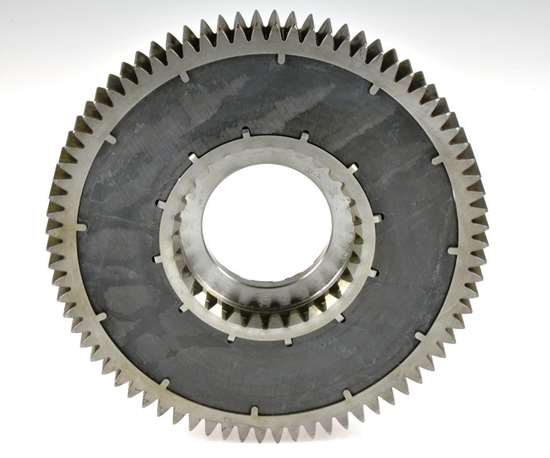 A diversified supplier of hydraulic and electrical components and systems for a wide range of industries, Eaton Corp. (Dublin, Ireland) also specializes in composite powertrain and drivetrain components for cars and heavy trucks. It has spent more than a decade developing hybrid metal/composite technologies, such as the carbon fiber-reinforced plastic (CFRP) overmolded steel differential carrier showcased in this issue’s Focus on Design feature. But Eaton has taken the technology to another level in hybrid steel/composite gears for heavy-truck transmissions.

A unique feature of this design approach is that it is scalable. That is, it is relatively easy for Eaton engineers to increase composites content in the part to meet lightweighting requirements or to shift to greater metal content to reduce part cost, depending on the customer’s specifications and budget.

“Both the gears and differential carrier are challenging applications,” says Kelly Williams, manager for polymer and nanocomposites materials and processing technologies at Eaton’s Corporate Research & Technology Center (Southfield, MI, US). “The approach we used is similar for both, but the designs are a little different. For example, gears are subject to higher loads but lower torque, whereas differential housings are opposite — lower loads but higher torque.”

The hybrid gears, then, feature steel in the teeth and hub. “Loading is primarily through the gear teeth, which are also the wear surfaces,” Williams says, “so it makes sense to use steel here.”

A mix of glass and carbon fiber is used in the flat disc portion of the gear (see photos), molded between the metal teeth and interior hub. She notes that a steel/carbon fiber-reinforced composite gear (like the top photo) can reduce gear weight by as much as 40% compared to a standard all-steel gear.

Achieving a strong bond between the composites and metal is key in hybrid material applications. Williams’ team avoided the use of adhesive in Eaton’s differential carrier by grit-blasting the metal surface to increase the opportunity for mechanical bonding. However, adhesive became an important component at the composite/metal interface in Eaton’s hybrid gears.

“These were different because we had a sandwich of steel teeth, steel hub and composite in between,” says Williams. “So coefficient of thermal expansion [CTE] became more of an issue, with the steel expanding into the composite.” The adhesive, she explains, absorbs the inevitable thermal expansion and accommodates the CTE difference between the two materials.

“There is also a difference in loading between the two applications,” Williams adds, noting that “in the gears, the load is on the teeth while the composite is stationary, so there is a shear load that the adhesive also helps to address. There is no such shear in the differential — the composite and steel receive the same type of load, though the steel carries a different level or magnitude of loading.”

During development, Eaton’s hybrid gears were subjected to cyclic temperature testing, frequency loading to simulate vibration and dynamometer testing. The latter involved an engine test rig that measures torque and rotational speed, with periodic inspections for debonding at the steel-to-composite joint. The hybrid gears showed no debonding and achieved 100% qualification.