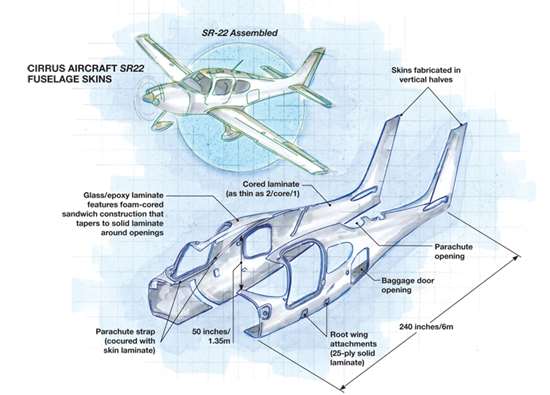 In the layup on the left-side fuselage skin tool, the multistepped edge design around the baggage door opening (about two-thirds of the way back) allowed the use of a simpler door hinge and hardware. Source: Cirrus Aircraft

In the layup on the left-side fuselage skin tool, the multistepped edge design around the baggage door opening (about two-thirds of the way back) allowed the use of a simpler door hinge and hardware. Source: Cirrus Aircraft

This view of the layup of the right-side fuselage skin shows the inner skin and core inserts (orange color). Edges of the core are beveled, to allow a transition to solid laminate in uncored areas, where the loads are expected to be greater. Source: Cirrus Aircraft

This view of the layup of the right-side fuselage skin shows the inner skin and core inserts (orange color). Edges of the core are beveled, to allow a transition to solid laminate in uncored areas, where the loads are expected to be greater. Source: Cirrus Aircraft

Visible in this cured but unpainted fuselage skin is the parachute strap, which is cocured with the skin laminate. Source: Cirrus Aircraft

Visible in this cured but unpainted fuselage skin is the parachute strap, which is cocured with the skin laminate. Source: Cirrus Aircraft

The Cirrus SR22 is the largest-selling general aviation airplane family in the U.S. Source: Cirrus Aircraft

The Cirrus SR22 is the largest-selling general aviation airplane family in the U.S. Source: Cirrus Aircraft

Quick, name the best-selling piston-engine airplane for the past seven years running: If you’re an aeronautics aficionado, you likely already know it’s the all-composite-airframed Cirrus SR22. With 3,483 units sold to date, the SR22’s tremendous popularity and market success have allowed the company to reinvest in and improve its basic design and tooling through the years, with the dual goals of improving performance and manufacturability.

Cirrus Aircraft (Duluth, Minn.) was founded in 1984 by Dale and Alan Klapmeier and several associates as a means to market their composite kit plane. While that first kit aircraft, the VK-30, never gained wide acceptance (only a few still exist), the Klapmeiers built on its fundamentals and manufactured a more conventional all-composite, four-passenger, single-engine aircraft, the SR20. Introduced in 1994, it was certified by the U.S. Federal Aviation Admin. (FAA) in 1998. In 2000, the company expanded the line during a period of general aviation growth, fielding the FAA-certified SR22, with a larger engine and greater flying range.

Thanks to robust sales, the company has been able to continuously improve part design, materials and processing, resulting in an updated, second-generation SR22 over the the past several years, says Cirrus airframe engineer Patrick Bergen. “Our roots are home-built aircraft, and at the beginning that meant wet layup on low-temperature tooling. What we have really done, over time, is design a better combination of material and process.”

The fuselage skins were a target for the company’s redesign decisions. In their earliest form, all Cirrus fuselages were produced in two halves, left and right, via wet layup. The fuselages included the vertical tail fin. According to Bergen, the left/right split simplified both tool and part construction: “The lengthwise split puts the bond joint at the middle of the windshield, which is not great, but integrates the vertical stabilizer into the skin molds, which simplified tooling.” A top/bottom split would have put the bond joint through the door openings, significantly complicating door details.

For the SR22, each half is 240 inches/6m long, from firewall to tail, and 50 inches/1,270 mm tall, roof to floor. The original design of the skin parts was accomplished with ProEngineer CAD software from Parametric Technology Corp. (PTC, Needham, Mass.) and finite element analysis (FEA) modeling was accomplished with FEMAP and Nastran software supplied by NEi Software Inc. (Westminster, Calif.). The FEA model determined the part thickness and laminate structure necessary to resist the various load cases, including landing loads and towing scenarios. The SR22 is certified for a 3.8G vertical acceleration and a 3G vertical inverted impact case, as well as typical FAA crash case requirements for seat attachments. In addition, the aircraft had to meet a unique load case in which the passenger cabin must remain intact in the event of deployment of, and landing suspended from, the plane’s emergency parachute. (Cirrus is the only aircraft OEM that builds to FAR Part 23 requirements that also, like many builders of smaller planes, offers a built-in safety parachute, which it calls the Cirrus Airframe Parachute System. The SR-22 is, in fact, the heaviest plane so equipped.)

Early on, however, the company made the decision to abandon wet layup and fabricate the SR20 and SR22 with prepreg for the sake of greater part consistency, notes Bergen. But without an autoclave, the material had to be low-temperature-curable at ambient pressure and still deliver a good surface finish. The vast majority of commercially available prepregs at that time were fully infused through the thickness, and optimized for autoclave cure. Cirrus engineers realized that a prepreg with resin on only one side could enable high-quality laminates with oven cure and vacuum pressure, because air could escape through the dry side, resulting in much lower void content. Bergen says the company initially sourced 3M (St. Paul, Minn.) for the one-sided fiberglass/epoxy prepreg, part of a product line that was later sold to Cytec Engineered Materials Inc. (Tempe, Ariz.). Subsequently, this semipreg concept was adopted by many material suppliers and fabricators (see "Tooling Update" under “Learn More,” at right). Cirrus qualified a second material from TenCate Advanced Composites USA (Morgan Hill, Calif.) as an alternative prepreg supply. A new automated ply cutter supplied by Autometrix Precision Cutting Systems, Inc. (Grass Valley, Calif.) was installed at the same time to cut and kit the prepreg, which significantly reduced material waste and helped optimize material throughput.

Modeling results showed that a sandwich of plain-weave fiberglass/epoxy prepreg facesheets with polyvinyl chloride (PVC) thermoplastic core could meet the design requirements, says Bergen. The skin thickness ranged from 2/core/1 in thinner areas to 25 plies thick in areas where the fuselage bears high point loads. From the beginning, Cirrus preferred foam core to honeycomb because PVC foam was available at lower cost, offered easier handling properties and required no edge treatments. Further, it could be thermoformed to shape to fit the tool.

During layup, unidirectional fiberglass tapes were added to structurally reinforce the skins around the seating area, essentially forming a stiffer “roll cage” in that part of the skins, a requirement of the parachute landing load case. An aluminum mesh supplied by Dexmet Corp. (Naugatuck, Conn.) was placed in the outer skin for lightning protection.

As sales of the SR22 soared, capital became available for a retooling effort and, Bergen explains, “Eventually, we understood that because we were already committed to spending money on new tools, the incremental cost of making part design changes was small. In the end, we changed every composite part and almost every metal part in the fuselage.” Design engineers and manufacturing engineers worked together to revisit all of the fuselage skins’ details, to effectively create new parts along with new tools.

“Most of the changes we made would never be noticed by the customer, but they improved assembly time and quality of the airplane,” points out Bergen. The redesign eliminated one ply in thinner areas of the laminate, and simplified the interfaces between the core inserts and the monolithic laminate. For instance, the first generation layup had foam core butted against some of the offsets in the mold, particularly around the baggage compartment door. When everything fit perfectly, “it was a good structural detail and laminate quality was high,” he says. However, any mismatch due to slippage of the core led to laminate wrinkles and rework. Thus, in the second-generation or what Cirrus calls the “G2” fuselage, the new layup was designed with the core inserts tapered down to solid laminate around openings in the fuselage parts, which caused a slight weight penalty because of less efficient load paths, but allowed faster layup and resulted in far fewer laminate issues.

Another aspect of the redesign, also involving the baggage door opening, was a new, multi-stepped offset in the fuselage skin. Although the new offset was more complicated, it allowed Cirrus to attach the door with a much simpler and lighter-weight hinge, and eliminate the first-generation, heavy gooseneck hinges and numerous metallic fasteners. “The deeper pocket created by the design change allowed the forward edge of the baggage door to dive under, and not hit, the fuselage when opened,” says Bergen.

Part consolidation was another benefit. Obviously a key component of the aircraft, the CAPS parachute straps run from the firewall along the side of the fuselage up to the parachute cover near the vertical tail. Prior to the redesign, the flat, braided aramid fiber straps with metal fittings — 1.25 inches/31.75 mm wide, 0.125 inch/3.18 mm thick, and approximately 200 inches/5m in length — were secondarily bonded to the fuselage skins after cure and assembly. In the G2 fuselage, the straps have been incorporated into the fuselage skins as a co-cured detail, says Bergen. “The straps are the first down into the mold during fabrication, and elimination of the bonding step has saved a lot of time.” Bergen is quick to point out that the company didn’t want too much part consolidation, so opted not to cocure parts like the cabin floors or longerons into the fuselage skins: “I believe it’s a false economy to consolidate too many parts into one component. Too much three-dimensional structure can cause wrinkling of the laminate under consolidation,” he explains. “We did what made sense and gave us confidence, without making the part too complicated.”

In the end, the redesigned, second-generation SR22 skin saved a total of approximately 23 lb/10.4 kg over the previous version, says Bergen, including metal hardware and fasteners. Fabrication efficiency was greatly improved: While 24 technicians on three shifts could produce 10 first-generation skin halves per week, six technicians working two shifts can produce 16 G2 skin halves per week, with fewer subassembly steps. At full production, the company now can produce about four planes per day. Bergen concludes that the second-generation SR22 was ultimately a compromise: “If you reduce material cost, you add weight; if you want to reduce weight, you add cost — those are realities that had to be balanced. Our structural engineers worked closely with our manufacturing engineers to produce a coordinated redesign effort — the result has been better parts at an optimized cost.”