Out-of-autoclave tooling gets out of the blocks 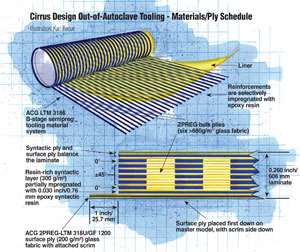 The lack of an autoclave has made especially difficult the production of composite tools that can duplicate the surface quality of a master model and stand up under thermal cycling during production of hundreds of parts. In the past, Ell has outsourced autoclave cure. “Sometimes this is a challenge, especially if the closest company is hundreds of miles away,” he notes. “So I either pay for travel, which can cost $200 per day per person and take 10 people on a large tool, or have other companies build the tool, which can double the cost of the tool instantly.”

In search of an alternative, Cirrus and supplier Advanced Composites Group Inc. (ACG, Tulsa, Okla.) have collaborated for three years on the development of out-of-autoclave tooling. Early work was done with ACG’s LTM10 and LTM12 tooling prepregs formulated for use in autoclaved and oven-cured tools. Unfortunately, oven-cured tooling prepregs have not worked as well out of the autoclave, where consolidation pressure (about 1 bar/14.5 psi) is insufficient to produce an autoclave-quality mold surface. Even when autoclaved at 3 bar to 5 bar (43.5 psi to 72.5 psi), prepregs require several intermediate vacuum bag debulks during layup to ensure full consolidation, yet they do not always yield the expected surface quality. However, recent trials with ACG’s newer LTM318U material system, designed exclusively for oven-cured tooling, have simplified tool production and shown marked improvement in mold surface quality and useful life.

Unlike the LTM10/12 materials, the 318U system is not prepreg-based. Instead, its fabrics are selectively impregnated (semipregged) with strips of resin film. The spaces between the strips provide generous escape paths for air during vacuum consolidation. Based on ACG’s ZPREG, which was originally developed for low-pressure molding of paint-ready automotive body panels, these semipregs “can be readily modified and formatted to provide the heavy ply weights for rapid tool construction, even in a form that does not require the intermediate ‘de-bulking’ cycles,” says Dr. John Nixon, technical marketing manager for Advanced Composites Group Ltd., the group’s European counterpart, based in Heanor, Derbyshire, U.K.

To appropriate these benefits, however, Cirrus had to redesign its toolmaking regimen to accommodate processing differences. That began with the master model, previously cut from 20-lb polyurethane foam. Because chemically active ingredients in some polyurethane and polyester modeling materials can outgas and interfere with the curing of LTM10/12 tools, Cirrus had protected tool layups by sealing foam masters with an epoxy surface coating (ACG’s CS705) and could have done the same with the 318U system because its slightly different chemistry reportedly doesn’t exhibit the same degree of cure inhibition. However, other concerns prompted a change. “A foam master doesn’t transfer heat as well as a consistent-thickness laminate master,” explains Ell. Additionally, the 318U’s higher initial cure temperature — 150°F to 180°F (65.6°C to 82.2°C) compared to 110°F/43.3°C for the LTM12 — raised concern about model integrity. “You have to ensure the master model can withstand the higher heat,” says Ell. For these reasons, and to ensure that the master would be vacuum-tight and able to hold its shape under full vacuum, the company CNC-machined a new master from epoxy-based REN tooling block supplied by Huntsman Advanced Materials (The Woodlands, Texas), using a 5-axis machining center built by Haas Automation Inc. (Oxnard, Calif.).

Cirrus also recrafted the cowl tool’s ply schedule. First down on the master was ACG’s ZPREG LTF318U/GF1200 surface ply, a 200 g/m² glass semipreg with an attached, lightweight scrim (50 g/m²), which was placed tool-side down. (CF0300 carbon fabric would be used in the case of a carbon-reinforced part.) This layer was extended 0.5 inch/12.7 mm beyond the main laminate stack (see ply stack illustration on p. 54) to bring it into contact with breather materials, allowing the vacuum system greater access to the semipreg’s vacuum paths. “The air is evacuated efficiently as the resin drops in viscosity and flows during the cure cycle,” says ACG technical support manager Jon Grigson. “It’s a very dynamic situation that works well in practice.”

The surface ply then was debulked at 13.26 psi/0.91 bar for five minutes, using bagging film, a P3 release film and a 4-oz breather supplied by Airtech International (Huntington Beach, Calif.). Second down in the mold was a resin-rich syntactic layer not previously used in ACG’s tooling systems — a 380 g/m² fabric semipregged with a 0.030-inch/0.76-mm continuous layer of epoxy syntactic resin.

“The syntactic layer donates resin to the surface ply,” Grigson points out.

“The syntactic layer also is the key to making a tool using only vacuum,” adds ACG regional sales manager Donald Rockett. “It’s like a layer of rubber, and it won’t leak.”

The addition of a syntactic layer required an adjustment in the ply schedule. Where ACG’s LTM10 system, for example, had used a 1-8-1 layup (a surface ply, eight bulk plies and another surface ply for balance), the 318U substitutes a 1-1-6-1-1 layup — the syntactic ply replacing the outmost bulk ply on each side. For the bulk plies, a 12K, 660-g/m² carbon ZPREG fabric is used for carbon tools, but a slightly heavier glass fabric was used for the cowl tool. The four middle bulk plies were oriented at ±45°, with outer bulk plies at 0°. This layup produces a finished tool of ~0.260 inch/6.6 mm thick, but for a smaller tool, where a thinner tool face will suffice, a 1-1-4-1-1 layup about 0.210 inch/5.3 mm thick can be used.

Ell says the tackier 318U materials took some getting used to. “You have to pay attention to the temperature of the environment,” he explains. “We try to lay up our tools at 60°F to 64°F (15.6°C to 17.8°C) because if the temperature gets up to around 70°F (21°C), you have difficulty picking it up when you have a void or a bridge.”

The completed layup was vacuum bagged as before and oven cured for 16 hours at 150°F/65.6°C, after a slow ramp-up of 35°F/19°C per hour, which allowed the Tg to step ahead of the postcure temperature so that the tool shape would not deform through self-weight. The postcure temperature was ramped to 392°F/200°C, then stepped down 5.5°F/3.06°C per minute to a dwell temperature of 375°F/190.6°C. This tactic optimized crosslinking of the polymer, making it able to withstand thermal cycling and minimizing tool shrinkage — a particularly important result for 20-ft/6.1m fuselage tool. “I can take that tool out after postcure and set it right back on the master model,” Ell claims. “Our part material shrinks more than the tool,” he quips.

That said, Ell points out that “the big gain for us has been durability.” The wet layup, gel-coated tooling that Cirrus once relied on would frequently microcrack or craze before 200 parts could be pulled. The cracks typically could be traced to the mismatch between the thermal expansion of the surface coats and the carbon or glass in the laminate. By contrast, Ell notes, “We built a tool for a main spar out of ACG’s 318U system that had 300-plus pulls and still had a lot of life before we did a redesign on the part.”

Further, the 318U tools can be used in an autoclave and costs far less than Invar, the tooling metal that offers the closest tool/part CTE match. The cost of such tooling for prototype or limited-run aerospace parts can be as high as 75 percent of the total airframe cost. “It takes $100,000 to build a single tool out of Invar,” says Ell. “If you need four tools, that’s $400,000 right out of the box.” By contrast, he notes, it cost roughly $40,000 to build the cowling master model. Material cost for the 318U system is roughly $71/ft², or about $1,775 per tool per cowling. The cost of the backing structure for each tool is about $5,000. Therefore, the estimated total cost, before labor, for building a single cowling tool from LTM318U is roughly $46,775, resulting in a savings of more than 50 percent. For multiple tools, the savings can be even greater because the one-time cost of the master model can be amortized.

According to ACG’s Rockett, the LTM300 Series OVBC materials are now available in ready-to-use kit form, with surface plies, syntactic plies and bulk plies in either carbon or glass to reflect the thermal expansion properties of the composite part.

ACG sees the material as an enabler for an industry in need of more sources for aircraft tooling. “Lots of aerospace companies have autoclaves, but many tooling contractors do not,” comments Chris Ridgard, ACG’s vice president, technology. “This out-of-autoclave option opens up the market for the tooling guys. It’s a really big deal.”