“We felt that we could create a booth that could be deployed quickly in many different settings by making it extremely lightweight, sturdy and portable,” says Jim Ashton, president of Imagine Fiberglass.

The company’s IsoBooth, which is based on a design originally developed by Harvard Medical School researchers, allows a clinician to stand inside, apart from the patient, and administer a swab test from gloved external hand ports. A shelf or customized tray on the front of the booth holds test kits, supplies and a canister of sanitizing wipes used to clean the gloves and the shield between patients.

“The IsoBooth is intended to give healthcare providers a safe and comfortable place to administer tests while significantly reducing the amount of PPE [personal protective equipment] consumed by traditional testing methods,” Ashton says. “The booth can eliminate as much as 143,000 pounds of biomedical waste per 1 million tests.”

He adds that the United States alone intends to ramp up to as many as 5 million tests per week, producing up to three quarters of a million pounds of waste in the form of disposable gloves, face masks and other PPE per week using traditional methods. The IsoBooth could lead to significant cost savings and reduce biomedical waste, he says. 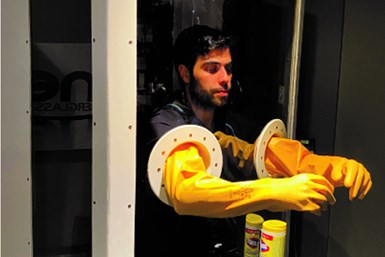 Imagine Fiberglass’ design incorporates three clear polycarbonate viewing panels attached to three tinted fiberglass gun roving/polyester panels reinforced with polypropylene honeycomb core in places that require additional stiffness. The composite panels are open molded and coated with a white gel coat exterior. “Once demand picks up, the process will be converted to light RTM [resin transfer molding],” Ashton says. The polycarbonate panels and arm ports are machined on Imagine Fiberglass’ CNC router; the only parts not made in-house, Ashton says, are the gloves.

The booth weighs about 90 pounds, can be easily carried by two people, and at 33 inches deep, is designed to fit through most standard commercial doors.

According to Ashton, there are several other competing booths that have been designed, but most of these rely on polycarbonate or acrylic panels that are fastened together at the corners with aluminum. “This is more fragile and awkward to move, and also considerably heavier,” Ashton says.

Besides light weight and durability, the molded composite booths are also tapered from back to front, allowing multiple units to be nested on a skid for shipping or for storage. In contrast, Ashton says competing plexiglass booths would require a larger storage room or transport vehicle, or would have to be disassembled and reassembled for transport or storage.

After consulting with Dr. Kris Olson, director of the Consortium for Affordable Medical Technologies at Harvard University, Imagine Fiberglass designed its booth’s arm ports to be oval-shaped, allowing maximum range of motion. The design also incorporates a clear polyvinyl chloride (PVC) curtain at the back of the station so that HEPA-filtered air can be pumped into the unit, eliminating the need for the healthcare provider to wear a mask, gown, face shield or goggles.

In addition, the booths are built to last for years. Ashton envisions the IsoBooth being used in COVID-19 testing facilities, emergency rooms, ICUs and pharmacy clinics. IsoBooths could also be used in workplaces as companies implement testing procedures when employees begin coming back to offices.

“Our intent has always been to reduce cost and environmental waste by eliminating disposable PPE for COVID-19 testing,” Ashton adds. “The IsoBooth is also a big help when there is a huge shortage of PPE, as there is today. An IsoBooth can be paid for in as little as one day of testing, depending on the current cost of PPE and the number of tests per day.”