Carbon fiber composites are often used to fabricate the surfaces of surgical tables. Unlike metal or other materials, carbon fiber composites are X-ray transparent, a property that is helpful when taking radiographic images of patients. However, as WIT-Composites (Lublin, Poland) found, the traditional exam table design isn’t always the most effective for medical workers’ needs. 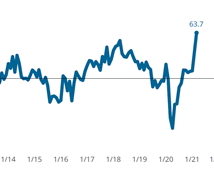 “What we learned is that one of the major challenges when it comes to performing various tests and medical services, even on medical tables with composite, X-ray-transparent surfaces, is that all of the connectors where instruments are attached to the table are made of metal,” he says. This means that for certain procedures or tests that require X-ray transparency, medical staff may need to move or reposition patients several times during the procedure in order to avoid areas of the table that are not transparent to X-rays.

“We carried out interviews and market research with doctors in Poland to ensure there really is a true need for a new solution in this area, and we learned a lot,” adds Weronika Soszyńska, managing director of WIT-Composites. For example, she says that anesthesiologists told them about how many of the IVs, electrodes and other equipment connected to patients can become dislodged when patients have to be moved around. “There are a lot of issues you don’t think about, and the doctors we talked to said they’d be very happy if a solution could be developed,” she says.

With financial support from the European Regional Development Fund under the Operational Program Smart Growth 2014-2020 initiative, WIT-Composites’ R&D department spent the next two years working on a medical table design that is completely composite, including the rails and connection systems. According to Wit-Rusiecki, it wasn’t as simple a process as expected.

“We set out to design an entire system: the surface of the operating table, the side railing and a hinge element, all made from composites,” Wit-Rusiecki explains. An optional orthopedic arm to be used during operations, also made from composites, was also developed. Each of these components came with its own design challenges and mechanical requirements, and resulted in a two-year trial-and-error process.

“We carried out various R&D projects, looking at different material compositions, trying different fibers from different suppliers, and layering elastomers and carbon fiber/epoxy prepreg in different ways,” Wit-Rusiecki says. However, he admits that the team initially ran into several issues with the materials, including cracks in the composite laminates, weight and material property differences between materials from different suppliers, and — most challenging of all, according to Wit-Rusiecki — difficulty balancing elastic properties against load requirements in different sections of the table.

Designs were first analyzed via programs such as SolidWorks (Dassault Systèmes, Waltham, Mass., U.S.), CATIA (Dassault) and NX (Siemens, Plano, Texas, U.S.) and tested for specific parameters such as strain and elasticity. Iterative physical samples were strength tested at a certified external laboratory, and tribological surface tests for hardness and wear resistance were performed in-house on the company’s internally designed test stand.

Material choices for individual components were made based on test results, including carbon fiber/epoxy prepreg and, for additional elasticity,  local application of rubber elastomer layers. According to Soszyńska, the elastomer layer creates a composite that is both flexible (with a variable Young’s modulus) and resistant to sudden load changes.

For each of the components on the full-scale prototype, sheets of layered carbon fiber prepreg and elastomer materials were cut to shape, placed into molds designed and built by WIT-Composites, vacuum-bagged and cured via autoclave.

For the surface of the table, main considerations included adequate X-ray transparency, the strength to withstand patient loads at key points according to the IEC’s EN 60601-2-46 standards, and ASTM standards for wear resistance and surface hardness. Maximum deflection under the load according to the weight distribution strategy was limited to less than 42.56 millimeters; load capacity of the tabletop was 225 kilograms (496 pounds). Maximum deflection on the tabletop occurs in the central part of the table, where the torso of a patient would be. This was caused by a designed void in the interior components of the table, to ensure required X-ray translucency (Fig. 1). 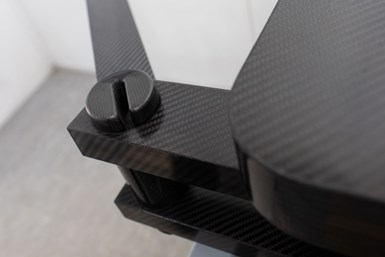 Fig. 2. A turning point. A mechanical arm attaches to the table rails via specially designed hinged connectors, shaped like the video game character Pac-Man. The hinges are able to slide easily around attached components due to layers of elastomers between the prepreg layers, which expands to lock in place and contracts to allow movement as air is pumped into or removed from a hollow cavity. Development of this hinge was considered the turning point in the design of the table system. 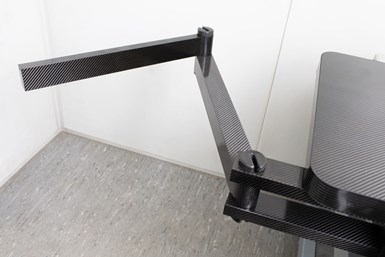 According to Wit-Rusiecki, the table itself was simple enough to design as long as the mechanical requirements were achieved, as several existing composite medical tables are already on the market to serve as a baseline. To build an all-composite system, however, required the team to design and engineer a set of customized composite rails for either side of the table surface, to replace typical metal rails, and some type of connection system for medical equipment to hang from during procedures.

Before building a prototype, the R&D team drew up several dozen ideas for different connection systems, based on everything from shapes found in nature to door hinges, and ran finite element (FEM) simulations to narrow the list down to the three most promising choices. The team built molds and physical prototypes of the three options for testing to verify load capacity.

Fig. 3. Riding the rails. Ridged side rails molded into the table’s edges enable the attachment of various surgical tools and instruments. Like the “Pac-Man” hinges, these rails feature a rubberized side component to enable air to pump into and out of the part (see drawing). 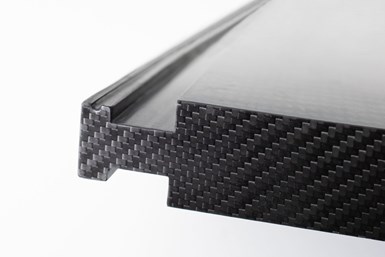 Two connection designs made it onto the final system prototype. The most effective design was considered the “turning point” of the entire project. Internally referred to as the “Pac-Man” design due to its shape, a hollow, cylindrical component fits between two parallel composite struts that protrude from the end of the table. This cylindrical component forms a hinge to connect a movable orthopedic arm off the end of the table (Fig. 2).

The biggest challenge of this hinge component is its dual-function capability: It needs to not only be movable to enable rotation of the arm, but it must also lock the arm in place after it’s been moved to the desired position. To achieve this, WIT-Composites developed a strategy that uses a compressed air pump of the kind already installed on many operating tables. The majority of the component’s outer skin is made from rigid prepreg; the Pac-Man-like indent within the cylinder is made with a thin prepreg layer made elastic with a  layer of elastomer. A tube attached to a compressed air pump forces air within the part’s interior cavity, which expands the elastic section of the skin, pushing it against the interlocking arm and preventing movement. When the air is released from the cavity, the flexible wall contracts, enabling movement of the hinge. “The final shape meets the assumed strength parameters and within a second, using compressed air, which is available in every operating room, the operating attachment can be mounted to the side rail of the tabletop,” Soszyńska says. 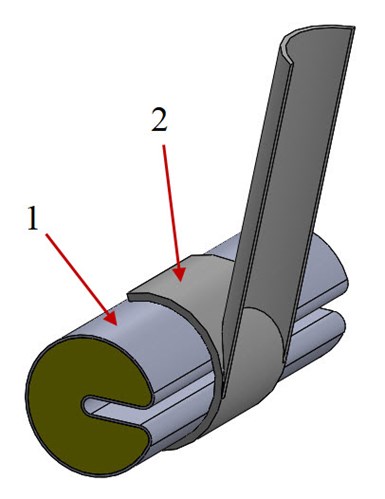 Fig. 4. Composite connections. This cross-section of the Pac-Man-inspired hinge (1) shows how it fits together with medical instruments and composite orthopedic arms (2).

Using this same flexible composite and air pump design, WIT-Composites also developed a lockable rail clamp mechanism to enable stability of medical instruments along the sides of the table (Fig. 3 and drawing).

“The versatility of this solution is characterized by the fact that it can be used as a connector for tubular elements and for hinge pins often used in orthopedic attachments during leg, pelvis or spine surgery,” Soszyńska says.

“What we have achieved is that there’s now no need to move the patients during the operation,” Wit-Rusiecki adds. “For this project, we had to use all of our capabilities, in part and material design, and also manufacturing technology.”

With a successful design in place, WIT-Composites now aims to partner with a medical equipment manufacturer to supply the composite components for a surgical table product line. Soszyńska says that the company has begun demonstrating the technology to several companies in Europe and the United States through WIT-Composites’ Las Vegas, Nev., office. Unfortunately, however, the coronavirus pandemic has delayed negotiations and the team’s ability to travel and demonstrate the technology.

In the meantime, the company has used the design innovations it created for this project as a springboard for other projects, especially the “Pac-Man” hinge design. For example, WIT-Composites is developing a 150-MPa (21,755 psi) hydrogen storage vessel for the Hydrogen Storage program at the National Centre for Research and Development (Warsaw, Poland), as a subcontractor of the Institute of High-Pressure Physics at the Polish Academy of Sciences (Warsaw). The flexible composite material and hinge connector design developed for the surgical table project led to development of a new solution for filament-wound carbon fiber composite pipes to be used on hydrogen refueling stations.. “This is a completely new construction, something unique to the market. And this project was born from our medical table work,” Wit-Rusiecki says. Another long-term goal is to transfer the hinge technology from this project to spacecraft and satellite components.