Lighter-than-air flight is making a comeback with Hybrid Air Vehicles’ Airlander airliner and it’s taking composites and sustainability to the next level.
#trends

Airship travel has maintained a niche position in commercial aviation since its development in the late 19th century. Since their debut, they’ve been engaged in passenger and cargo transport and commercial applications. More recently, new, more serious progressions into defense surveillance, luxury tourism and freight delivery indicate airship travel’s potential in the growing urban air mobility (UAM) market on a larger scale.

Hybrid Air Vehicles (HAV, Bedford, U.K.) is one company that has tackled this niche market with the development of its Airlander 10 hybrid air vehicle. The bi-hulled aircraft, which makes extensive use of composites, comprises a nonrigid envelope/hull — the primary structure that holds the pressurized helium and gives the vehicle its elliptical shape — four keresone-burning engines, and the payload module attached at the bottom. The short take-off/landing (STOL) vehicle uses a combination of buoyant lift from the helium, aerodynamic lift (from air flow) and vectored thrust to stay aloft; ballonets inside the hull, which are filled with air, expand and contract according to changes in temperature and altitude. According to HAV, the Airlander 10 has a range of 4,000 nautical miles, a top speed of 130 kilometers per hour and can remain airborne for up to five days. 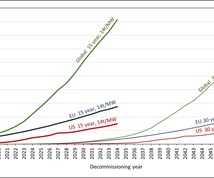 CW has reported previously on composites use in the Airlander 10, and checked in with the company again to find out how materials and technology use is evolving on the aircraft. Mike Durham, CTO of HAV, says composites use is extensive. “The envelope [hull] is composite as much as it’s made from layers of material with a urethane elastomer,” says Durham. “But it has no compressive strength, making it flexible.” Durham says the hull’s layers include a combination of Vectran high-performance multifilament yarn woven from liquid crystal polymer (LCP), Mylar polyester film and Tedlar polyvinyl fluoride film, for a multi-layer laminate designed for strength, helium retention and durability.

Composites also come into play with all of Airlander’s rigid structures, including tail fin components, which are made out of woven fiberglass prepreg supplied by an undisclosed international company and vacuum cured out of autoclave (OOA) at low temperatures. Payload module, rear propulsor ducts and front pylons incorporate carbon fiber prepreg, also processed under a low-temperature OOA cure.

“We've had to develop those processes over the last eight to 10 years,” Durham says. “Even our basic payload module is about 23 meters long, and about four-and-a-half meters wide, so it's a big structure. You could never build an autoclave for that, hence the reason we've gone out of autoclave.”

HAV has three to four main global suppliers manufacturing composite structures for the Airlander 10, with HAV performing assembly and integration. While unable to disclose names, Durham says that many of its fabricator suppliers will be based in the U.K.

Airlander’s potential is not only in the use of advanced materials. Durham says the company is also working on integration of fuel cell technology to achieve ultra-low and zero-carbon operations.

Between Airlander’s buoyant lift and four kerosene-burning engines, the vehicle currently delivers up to 75% less CO2 emissions compared to conventional fixed- or rotary-wing aircraft. Committed to zero-carbon aviation, HAV has been working toward progressively adopting engine electrification.

“When we set out, we were looking at 2030 to having a fully electric, operational Airlander,” says Durham. “We're currently in the process of developing the aircraft with kerosene-burning engines on each corner. We hope to be flying that [version] by 2025. But the first steps for us in electrification is to go to what we call a hybrid-electric version.” This configuration would combine forward electric and rear kerosene-burning engines, with 90% emission savings. 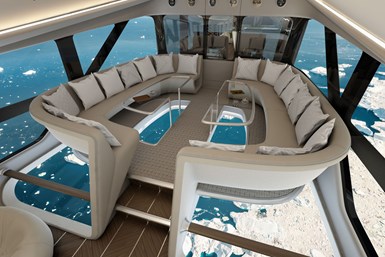 To achieve these goals, a 2019 grant-funded project, E-HAV1, in partnership with Collins Aerospace (U.K.) and the University of Nottingham (Nottingham, U.K.), has led to the development of electric propulsion technologies, including a full-sized prototype 500-kilowatt (kW) electric propulsor for ground testing. Durham adds that this has been the catalyst for another partnership HAV is working toward associated with hydrogen fuel cell technology.

However, for HAV, hydrogen fuel cell adoption has its long-term and short-term challenges. Durham says that because hydrogen fuel cells are a still-emerging industry, “one of our biggest challenges has been finding the right partners with the right level of credibility that allow us as a business to manage our risk or exposure. A partner that delivers what we want when we want.”

Another challenge is that most hydrogen that is being produced — “blue” hydrogen — while being purportedly cleaner, does not align with the company’s zero-emissions expectations. “I really want the suppliers to be using either wind turbines or solar panel generated energy to create ‘green’ hydrogen at the lowest possible CO2 cost to the environment,” he adds.

HAV is focusing on use of pressurized hydrogen because of its lower risk profile, but Durham notes that the company is flexible and could potentially integrate cryogenic/liquid hydrogen technologies without too much modification, possibly by 2030. Regardless, he says, Airlander will initially require hydrogen storage tanks that can hold H2 gas at around 600 bar and are perfectly optimized for light weight, since “we can’t afford to carry an extra kilogram anywhere.” Durham says use of composite pressure vessels for hydrogen storage is a possibility, particularly if cryogenic/liquid hydrogen is adopted.

The future of Airlander

With a successful flight test program and a technology readiness level (TRL) of 7 under its belt, HAV’s Airlander 10 is getting close to moving to the production phase. Further, HAV has secured Design Organization Approval (DOA) and Production Organization Approval (POA) from the U.K. Civil Aviation Authority (CAA). Now, the aircraft is aimed toward earning Type Certification (TC) for global operation.

Further, according to Durham, Airlander 10’s future is vast, something the pandemic has reiterated. “At the time [2018-2019], there was no doubt luxury tourism was the market for us to gain traction in,” he says. “But of course the pandemic hit and tourism seems to have a been particularly hit, so we've had to reassess our position. We see tourism coming back — green eco-tourism is going to be a strong place for us — but we’ve also seen this [the pandemic] as an opportunity to look to other key sales markets.”

Durham points to urban air mobility as a strong potential market, as well as surveillance (military and civil) and freight delivery applications.

“There are a lot of opportunities for this technology, in multiple markets. It’s an exciting time to be working on an ultra-efficient aircraft and we’re looking forward to launching the program later this year,” he concludes.