Aerospace composites in “the more for less” era

The past decade was about innovation and new technology. The next will be about productivity.
#787 #a350 #a380 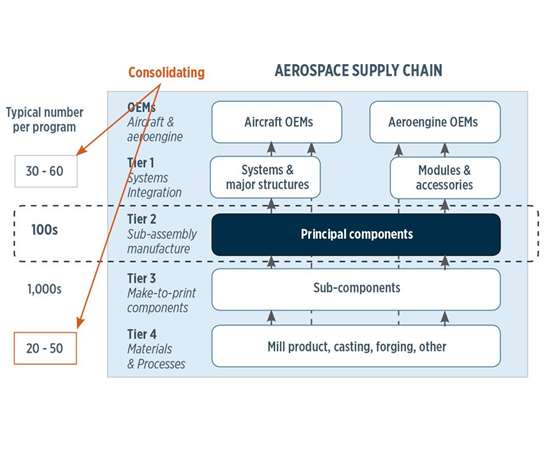 Over the past 10 years, the aerospace industry has been marked by a lot of design innovation and technology introduction, starting with the Airbus (Toulouse, France) A380, and followed by the Boeing Co.’s (Chicago, IL, US) 787 and the Airbus A350. But there are important changes coming. We’re entering a new period, one not so focused on the above but instead on a theme of “better, cheaper, faster.” The past decade was about innovation; the next will be about productivity, and this change will require different success factors from aerospace suppliers.

Worldwide aircraft production today, across all market segments, is valued at US$180 billion, and should peak at nearly US$210 billion in the year 2021. A slowdown is likely after that. The good news is that aerospace is and will remain a growth market — it was the only major capital goods industry that grew through the Great Recession. Large jetliners account for more than half of this market value, and the military segment looks to be on a growth trajectory. But I’ve focused on the commercial air transport market, because this is where the clear majority of aerocomposites are used.

We’ve been in a very unusual period: An incredibly large number of aircraft orders have been placed over the past few years, and these orders have been driven largely by a combination of high jet fuel prices and the current ultralow cost of capital. Simply put, airlines wanted more efficient aircraft to off set fuel prices, and could afford them. Although jet fuel cost has ebbed since 2012, continuing low interest rates are supporting fleet recapitalization and current aircraft orders. That said, reduced oil prices do impact twin-aisle aircraft, making it less expensive to keep older aircraft flying, which has reduced backlogs for larger twin-aisle planes, such as the 787. The bottom line is that there is currently a record number of orders booked for single aisles, including the newer re-engined versions of the Airbus A320 and the Boeing 737. Both Boeing and Airbus want to get to a production rate of 60 single-aisle units per month, because this is where they make their money, given the current weakness in the twin-aisle area.

The Boeing/Airbus duopoly is, in fact, dependent on single-aisle aircraft sales for the vast majority of their profits, which is the motivator for increasing production rates. Yet, the two companies have for years been engaged in a market share competition. As a result, both have offered single-aisle products below list prices, so the realized prices (what air carrier customers have actually paid) for A320s and 737s have remained virtually unchanged since 2002. Some argue that single aisles have become commodities. The two OEMs are now shifting focus to increasing their profits, to as high as 15-20% margins.

Boeing and Airbus are undertaking initiatives that include growth in higher margin services (aftermarket) revenue, which will include new value propositions and, potentially, acquisitions of service companies. Others include aggressive supplier cost reduction through initiatives like Boeing’s “Partnering for Success,” plus better labor agreements, more automation and “lean” programs. In aerostructures, OEM tactics will include part redesigns, a move to lower-cost processes, material substitution, tougher commercial contracts and recapturing more scrap. The bottom line is that we’re in for a period of extreme focus on cost, that is, reducing costs to pursue profits. Expect more automotive-style operations and practices.

So, what are the implications for suppliers? Typically, the aerospace supply chain includes 30-60 Tier 1 suppliers that are responsible for systems integration; hundreds of Tier 2 suppliers that make principal components; thousands of Tier 3 suppliers responsible for subcomponents, and perhaps 20 to 50 Tier 4 companies that supply materials and processes (metals and composite prepregs). The OEMs prefer to deal only with Tier 1s, so those firms are the primary targets of OEM supply chain initiatives, and they’ll face enormous pressure in terms of pricing and selective customer vertical integration. This will lead to continued consolidation of Tier 1s in the coming year. Tier 2s, in turn, will face a downward squeeze from consolidating Tier 1s and upward pressure from Tier 4s, and it will be very important for them to develop what I call a “winning business model” and a capacity for competitive differentiation. And, there are far too many Tier 3 firms; attrition is a certainty, and consolidation will take place at this level as well. However, in my opinion, consolidation of Tier 4 suppliers is nearly complete (see the “Aerospace Supply Chain” chart above).

If we look at aerospace raw material demand, which totaled 1.56 billion lb (707 million kg) in 2015, composites demand accounted for 71 million lb (32.2 million kg), or roughly 5% of the total. I expect that composite material’s 5% share of demand will grow by 6% per annum through 2020, with titanium close behind at a 4% annual growth rate. The aggregate “buy-to-fly” ratio is approximately 6:1, for all materials combined. Thanks to design and processing improvements, the composites buy-to-fly ratio is far less, ranging from 1.2:1 to 1.4:1, which helps favor its growth.

Of the aerospace-related events that occurred in 2016, two stand out that appear to validate the contention that changes are coming to this market. Foremost is that Boeing opened its composite wing center in Everett, WA, US. That Boeing brought wing manufacturing back in-house and will keep wing manufacture close to the design process is one big indication that Tier 1s will not have the opportunity to build wings in the future, and will settle for fewer and less profitable projects. Another was the first delivery of the Bombardier (Montreal, QC, Canada) CSeries single-aisle jet, to Swiss Airlines.

It features the industry’s first aluminum-lithium alloy fuselage, with composite wings made via infusion. Aluminum-lithium is significantly less dense than aluminum alone, yet is more damage tolerant at lower cost than composites. This might signal some significant material changes in single-aisle jets. The composites industry must gird itself for tougher conditions in supplying aerospace components in the coming years.