As contiguous agricultural fields in areas such as North America, Argentina and Brazil have grown larger thanks to consolidation, and as no-till farming increases in certain geographies, farmers want sprayer systems with longer boom arms to reduce the number of passes needed to cover increasingly larger fields. This also reduces soil compaction, increasing productivity and crop yields.

In response to this need, the Argentinian arm of King Marine S.A. (Valencia, Spain), whose core business, ironically, was fabricating composite boat parts using aerospace-grade carbon fiber-reinforced plastic (CFRP), used its composites expertise in other markets to develop new sprayer boom arms for self-propelled spraying equipment. In use, the boom arms unfold and extend perpendicular to the main axis of tractors and permit farmers to apply liquid chemicals (e.g., insecticides, herbicides and fertilizers) to crops. After use, they refold and stow along tractor bodies to avoid tangling with fence posts and to permit farmers to drive on roads. 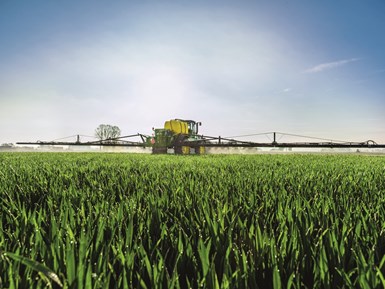 The limits of metal. Traditionally produced in steel, sprayer boom arms had reached their practical structural and width limits owing to the large support structures required to keep arms from bending under torsional and fatigue loads. Source | Deere & Co

Booms have long been produced in steel, but as length has increased, larger support structures were required to keep arms from bending under torsional and fatigue loads and during unintended impacts with fences, trees and other structures. (High fatigue loads are why booms never transitioned to aluminum.) In turn, longer booms with bigger support structures necessitated that farmers purchase larger tractors to carry heavier spraying equipment and larger tanks holding greater volumes of liquids; however, in solving one problem, the heavier equipment leads to increased soil compaction and, as a result, reduced crop yields. In addition, many agricultural chemicals corrode metals, and longer booms require more elaborate folding mechanisms for boom stowage. Eventually, steel booms reached a practical limit of approximately 36 meters (120 feet) side-to-side. Still, the market — particularly in the Americas — wanted longer booms.

The Great Recession of 2008 was catastrophic for both individuals and businesses. Twenty-year-old, family-owned King Marine, which has manufacturing facilities in Picassent, Spain, and Campana, Argentina, entered 2008 with a booming business producing CFRP components — particularly masts — for high-performance yachts.

“That’s when the worldwide economic recession started, and the luxury marine market took a huge hit,” recalls Natalia Dacko, European administration chief and internal audit at King Marine. “Our sales dropped dramatically, and we stopped building boats. We were in crisis mode because our company was in jeopardy. We had a large staff of technicians, engineers and specialists — all of whom were experts in carbon fiber [composites]. The big question was, ‘What are we going to do now?’” King Composite S.L. was created to explore non-marine CFRP applications.

Longer than ever. Composite booms feature the ability to unfold and extend for easy use. Source | Deere & Co.

An unexpected solution to the company’s concerns came in 2009 from an Argentinean whose own company manufactured agricultural sprayer systems. The man was frustrated about problems plaguing his metal booms. “He told us he’d like for booms to be lighter, longer, free of fatigue, corrosion-proof and easy to repair,” recalls Dacko. Although King Composite had no previous agricultural equipment experience, a team built a CFRP prototype, and the Argentinean company loved it, kickstarting King Composite’s growing business with agricultural equipment OEMs in Argentina. King Composites would eventually be renamed King Agro SL.

As business in composite sprayer booms grew, King Agro became known for its innovative and quality products. After a few years, its success was noticed by an agricultural equipment leader fighting its own sprayer boom battles. Engineering team members from Deere & Co. (Moline, Ill., U.S.) met with King Agro in 2015 to discuss opportunities, and soon King Agro was producing and distributing CFRP booms for the John Deere brand.

“We started with King Agro’s designs and recommendations, plus what Deere had developed, and found they were pretty applicable,” explains Phillip Ferree, King Agro general manager. “First, our joint team made some changes to improve reliability and durability for the South American market and launched those products in 2015. Simultaneously, we started designing second-generation products for North America and Europe. To meet local regulations, we needed different functionality in things like durability and impact, which required translating metal specs into composite designs.” Those products were commercialized in 2017.

“During our first meeting, we spent three hours just discussing different features of sprayers in North and South America,” recalls Thomas Bartlett, Deere sprayer product engineering supervisor. “Not only do they use different folding patterns — there are 20 different ways to fold these systems depending on market and regulations — but farming conditions are also different. In Brazil, they use no-till farming. In North America, it’s more limited till with different farming practices and more regulation. Europe has further differences and much smaller farms. They keep their chemicals centralized, so sprayers are brought to the depot for refills rather than taking chemicals out to the fields for refills as we do in the Americas.” Additionally, in some geographies plumbing carried liquids from the tank to nozzles through the arms, but in other locations, plumbing ran beneath the arms. Still another challenge was how long to extend the booms, as adding another meter here or there wouldn’t necessarily provide a workable solution. Instead, engineers had to consider how crops were planted in each geography and the distances between and within rows. 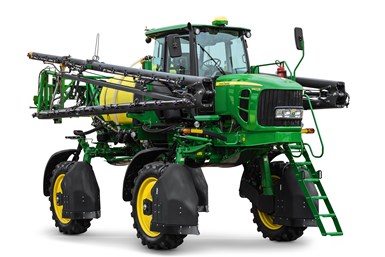 The booms feature multiple composite tubular structures with square cross-sections that, in turn, are connected via special “ends” that connect to the fluid delivery systems. Specially designed features molded into the main structures provide components with required functionality to hydraulically open/close and carry fluids under high pressures. “With the hydraulics, we were able to integrate lots of features that we needed so we could put things together and create a more simplistic design overall,” adds Bartlett. Deere requires that booms deploy/stow in less than 1 minute and that fluid be delivered within two seconds of starting the pump.

All composites use an epoxy matrix and are vacuum bagged and autoclave cured. A combination of carbon and glass reinforcement is used depending on whether components need higher strength or higher impact. Most of the carbon fiber is 24K tow but in a variety of formats, ranging from unidirectional to twill weave for external appearance layers with clear-coat finish. In joints and locations where hydraulics interact, where more strength and stiffness are needed, heavier structures with more plies are used. Depending on model and market, production volumes range from 100 to 1,000 systems annually. King Agro estimates that in 2017, the total global market for self-propelled sprayers was 14,000 units/year.

“Going into this program, our targets were to extend booms to 40 meters but at 30% lower mass, since weight was very important,” notes Jonathan Nelson, Deere composite sprayer boom design engineer. “When you hang a large mass off the front or back of a machine, you’re battling inertia, so it’s a lot harder to balance loads between front and rear axles. We also wanted to improve corrosion resistance, but also had to consider galvanic corrosion in the presence of carbon fiber. Another requirement was for higher impact because you just never see a sprayer that hasn’t hit something. We carried over standardized tests developed for metals that involve running booms into fence posts for several hundred cycles.” Working loads and fatigue on parts are surprisingly high, as equipment travels at 24-30 kilometers per hour [15-19 miles per hour] and plumbing sees spraying pressures of 276-414 KPa [40-60 psi].

After three years, the collaboration proved so fruitful that in 2018, Deere acquired King Agro, which now builds booms at its facilities and ships them to John Deere factories in Des Moines, Iowa, U.S., and Horst, Netherlands, for final assembly. The deal reportedly allows King Agro to retain its brand name, trademark and commercial relationships. 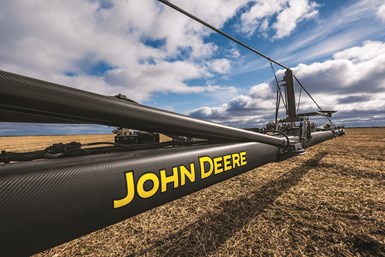 “The best part is the customer benefits,” adds Bartlett. “With carbon fiber products, they can be more productive. They can go wider without a weight penalty, cover more acres, experience less soil compaction, and the reduction in ground pressure positively affects yield.”

Ferree agrees: “From a design standpoint, composites enable us to do things we couldn’t do with current materials, which were at their structural and width limits,” he explains. “We’ve had a solid transition from our steel offerings to our premium CFRP offerings — particularly in the Americas — because we bring higher productivity, which in this segment is greater width. Lighter, wider booms can be installed on smaller, less-costly tractors. Or, more liquid can be carried on a given tractor while maintaining the same mass. Either way, the loading balance between front and rear axles is improved and the center of mass is closer to the machine’s center, improving ride for the operator.”

“We do see applications for carbon fiber in other products,” predicts Aaron Wetzel, vice president, Deere ag & turf crop care platform. “In the coming years, we’ll explore additional opportunities where the light weight and stronger-than-steel capabilities will add additional value to our products for our customers.”