According to Bercella, the European Space Agency’s (ESA) Vega program provides an answer to the increasing commercial demand for small satellites. The flight aims at demonstrating the technical and financial feasibility of “rideshare” opportunities for small satellites being launched at once from a single modular architecture in order to split launch costs.

The SSMS dispenser is said to consist of a modular architecture, aimed at hosting multiple combinations of small satellites at once. This includes a hexagonal lower section, with two deployers for nanosatellites on each side, for a total amount of 12 deployers and 46 Cubesats in total, and an upper section capable of hosting various configurations of micro-, nano- and mini-satellites, namely seven microsatellites for this launch. 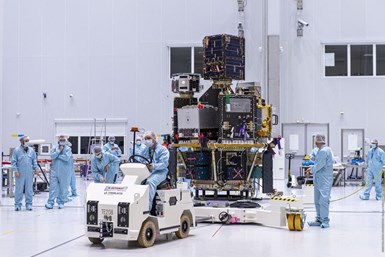 The SSMS system is made from several large sandwich panels with full carbon-fiber composite skins. The skins use Toray RS-36, an epoxy-based composite material reinforced with Toray M55J high modulus carbon fiber, which provides strength, stiffness and stability for the overall structure; the materials were supplied by Toray Advanced Composites’ European Centre of Excellence for thermoset systems in Langley Mill (Nottingham), U.K. According to Bercella, the SSMS dispenser structure was designed by SAB Aerospace s.r.o and commissioned to Bercella for Italian aerospace company Avio S.p.A. (Rome, Italy) due to Bercella’s experience on large structures for the space industry and commitment on optimum performance and lead times.

"We are proud for our contribution to this milestone for the European space industry. We welcomed the challenge with enthusiasm, putting at ESA’s disposal our process expertise and strong materials know-how. We are ready to strengthen Italy’s participation in the space market evolution, and contributing as a key European player for composites structures for space,” says CEO Massimo Bercella. “We praise ESA's willingness to support European SMEs in this important step forward. SAB’s high professionalism, together with the commitment of all players involved, helped managing such a complex project.”

According to the company, the ambitious multiplayer project requested significant risk mitigation and process control, that Bercella provided via its integrated manufacturing efforts and in-house industrialization capabilities. Further, the project’s challenging size was managed through Bercella’s manufacturing facilities, in addition to a four-meter diameter autoclave and large CNC equipment. The project also gave Bercella the opportunity to upgrade its internal lab with state-of-the-art testing equipment, including an ISO 8 clean room.

Throughout the multi-year project, Bercella says it produced and tested almost 1,000 samples for materials and processes qualification, built and assembled the flight panels introducing, which are said to have improved performance optimization in the 2.5-meter diameter main deck and transformed its initial four-part design into a single-piece creation.