Developed in 1967, the office building was originally a poured-in-place concrete structure with deep inset glazing bays located between structural piers. The insets, as well as the raised podium the building sits on – which sets it back from the street wall — have resulted in poor daylighting. Wanting to retain the building’s exoskeleton, the design team’s decision to retrofit it with FRP sunshades was designed to strike a balance between aesthetics and constructability. Compared to other materials, FRP’s properties would dampen wind-induced vibration, and it offered significant form flexibility to meet solar angles and design priorities. 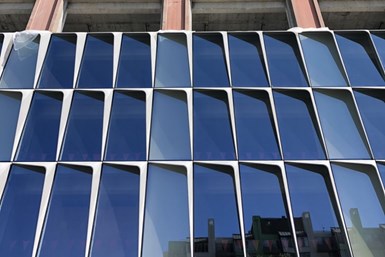 In total, the office building was fitted with about 680 sunshade hoods manufactured by Kreysler & Associates (American Canyon, Calif., U.S). On site, the FRP was secured with a pre-attached Z-shaped aluminum adapter to the aluminum fins on the curtain wall frame before installing the units onto the building. This ensured the hoods could be accessed or removed from the exterior easily. Each FRP hood is 6 feet wide and gradated in depth from 14 inches at the second floor to 26 inches at the twelfth floor. There are 16 different forms used in the project.

The retrofit of 633 Folsom added five floors to the northeast half of the structure, boosting its overall square footage to more than 270,000 square feet. Reconstructed with glazing and aluminum panels, the southwestern portion was tied to a facade system that conformed with the existing profiled columns. Further, the design team developed a custom rain screen system that accommodated the breadth of aluminum panel widths while minimizing the size of structural members.

Click here for the original report in Architect’s Newspaper, which includes additional images.