Aircraft manufacturer Avions Mauboussin (Belfort, France) reported that it is developing a new generation of hybrid, hydrogen-fueled aircraft, the Alerion M1h and Alcyon M3c. Revived from a 1930s aviation brand founded by Pierre Mauboussin, the structure is said to be made of natural composite materials — wood, fibers and bio-sourced resins — and incorporates a plug-in series hybrid Zéphyr engine to alternate between electric and hydrogen capabilities.

The program’s main objective is to enable sustainable intercity mobility and access to areas currently closed to conventional aircraft, using clean and silent short take-off and landing (STOL) aircraft. Alérion M1h and Alcyon M3c’s performance will allows them to cover a large distance and operate from a reduced infrastructure such as small airfield, heliport, sports field, parking lots, public parks or a residence lawn.

According to Avions Mauboussin, the 1930s aircraft manufacturer, Pierre Mauboussin, represents the innovative spirit of French aviation. Breaking endurance and speed records, Pierre’s planes were renowned for their energy efficiency, thanks to highly improved aerodynamics combined with a modest engine. David Gallezot, founder of the new Avions Mauboussin, wanted to revive the brand that is synonymous with innovation and avant-garde thinking.

Alerion M1h, said to be the first of the Avions Mauboussin range and designed with the Universite de Technologie de Belfort-Montbeliard (UTBM) and industrial partners, is a light tandem two-seater with low wings, and a hybrid drive, ideal for the pilot-owner and on-demand mobility market. 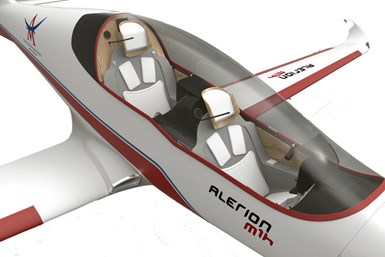 The powerplant will initially be hybrid (electric/thermal), with a total power of 80 kilowatts (kW; about 110 horsepower). Avions Mauboussin says this will enable STOL in electric mode while cruising will be in combustion mode (250 kilometers per hour) with a range of several hundred kilometers (able to fly from Belfort to Toulouse in two and a half hours, for example). This, in turn, will lead to reduced noise and inconveniences.

Subsequently, a hydrogen-powered turbine will enable the electric engine to function, eliminating harmful emissions and the use of fossil fuels.

The first flight is planned for 2022 in the hybrid version and for 2024 in the hydrogen version. Commercialization of the aircraft is scheduled for the end of 2024. This aircraft will validate the technologies transferable to the next model, the Alcyon M3c, and should be quickly available on the general aviation market with a sustainable/ecological offer.

The Alcyon M3c, a regional STOL aircraft, will have a seating capacity for five passengers, and the same powerplant as the Alerion M1h two-seater (hybrid, then hydrogen). It will have a range of 1,500 kilometers and will reach a cruise speed of 370 kilometers per hour. Certification and commercialization are planned for 2026.