One of the buzz phrases surrounding President Obama's stimulus legislation is “infrastructure construction.” Composites professionals know that if we want a lasting solution to current civil infrastructure needs, 21st Century materials and technology must be used. We know that composites offer that option. But they — government officals, civil engineers and other decision-makers — don’t know.Who will tell them, if not us?
#infrastructure 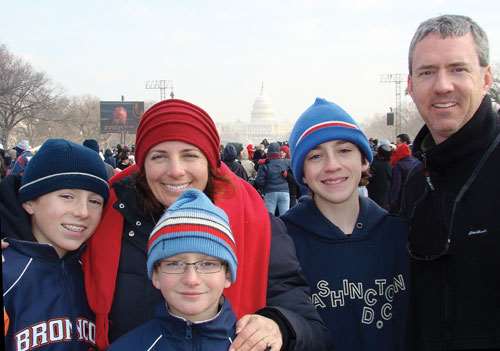 Barack Obama has taken the oath of office (an event my family and I were privileged to witness) and is hard at work promoting his economic stimulus legislation, which was introduced in the U.S. House of Representatives four days before he became our 44th President. The $825 billion plan rolls together, among other things, tax cuts and federal government public works projects, all designed to kick-start the economy, create jobs and pull the country out of the ditch into which we drove it late last year. The U.S. Senate has yet to unveil its stimulus plan, but I’m guessing that by the time you get this issue of CT, both houses and the new president will be very close to making the legislation reality.

One of the buzz phrases surrounding this stimulus legislation is “infrastructure construction,” a concept that is just explicit enough that we all understand fundamentally what it means, yet just vague enough that it’s easy to get carried away by the potential implications: It could mean the federal government will repave my street, or it might be that it’ll fix the cracks in the dam on the reservoir that waters my community. Given the current lack of specifics, we in the composites industry could be entertaining visions of millions of tons of fiber and resin employed in the repair and replacement of thousands of bridges, overpasses, utility poles, pipes and, yes, dams.

And what’s not to like about the opportunity? We’ve recounted many times in CT the numerous ways that fabricators have creatively used composites to replace or strengthen traditional materials like steel and concrete in infrastructure applications. We’ve documented repeatedly how easily composites can be applied, and we’ve demonstrated their long life, resistance to corrosion, light weight and strong return on investment, when viewed from the greater perspective of lifecycle cost. Given these attributes, you would think that composites use would be accepted — even standard — practice in departments of transportation and other public works authorities throughout the country.

And you’d be wrong.

If CT is the preacher of the composites faith, consider yourself the choir: There is a whole universe of contractors, road builders, bridge builders and government transportation managers who not only don’t know a spool of glass fiber from a spool of thread, but also have unrelenting faith in the traditional materials that are now in such dire need of repair. Nine times out of 10, when it comes to performing the repairs we must make to our endangered infrastructure, most agencies will replace corroded steel with still corrosion-prone steel, and crumbling concrete with more concrete, despite the fact that it, too, will crack and crumble under attack by water, thermal cycling and road salts in as little as 25 years — far short of its once-promised 70- to 100-year useful life.

We know that in the 21st Century, if we want the biggest bang for our stimulus buck — if we want our civil infrastructure to last into the second half of the century — it’s not unreasonable to expect the government to employ 21st Century materials and technology. We know that composites offer that option.

But they don’t know.

Consider this the Infrastructure Rallying Cry: Widespread use of composites in the restoration of bridges, overpasses, utility poles, pipes and dams will occur only if this industry stands up for itself and demands it. Get on the phone and get online today. And good luck.