In business for 40 years, HydraSports Custom (Islamorada, Fla., U.S.) is a specialist in outboard-powered, center-console boat designs that provide useful “walk around” freedom on one level, with no bulky inboard engine. Although its popular 43-ft/13m model did well as the boating world recovered from the recession, center console enthusiasts made many requests to boatbuilders for more — more size, more creature comforts and more power. Alex Leva, president of HydraSports Custom, dreamed of producing the world’s largest center console craft with four powerful outboard motors, capable of a 300-mile fishing trip, but equipped with stylish amenities as well.

The design team had nine months to come up with the 53-ft/16.3m vessel’s overall design, employing Dassault Systèmes SolidWorks (Waltham, Mass., U.S.) for CAD work, and Cosmos (part of SolidWorks) for finite element analysis (FEA). Says Hydra-Sports Custom’s director of engineering Kurt Bergstrom, “We imposed the tight timeframe because our competition was stiff and we wanted to quickly bring a new product to market. Our goal was to design a new center console that minimized hull weight but allowed speeds in excess of 70 mph with multiple outboards.”

To take weight out of the hull, sole (deck) and transom, Bergstrom assembled a team that included Structural Composites’ (Melbourne, Fla., U.S.) president Scott Lewit and co-founder Dr. Ronnal Reichard, a structural engineer and a professor at Florida Tech (Melbourne, Fla., U.S.) for hull and transom design, and Marine Concepts’ (Cape Coral, FL, US) Sid Lanier for tooling design. The team revisited a US Navy Advanced Combatant Craft Technology concept envisioned by Reichard for a rigid hull inflatable boat (RHIB) years ago. “We knew Structural Composites and their work on the Navy projects, and approached them,” says Bergstrom. Rather than a thick sandwich design to resist flex loads, Reichard had used a thin uncored solid laminate hull, or “membrane,” that transfers loads to low-section frames. Because the membrane design is not flexurally stiff, it relies on in-plane tension strength and the multiple, closely spaced low-section frames to absorb loads.

“The combination of thin skin and low-section framing allows the laminate to transition from conventional bending to membrane tension, where it can support really large loads and absorb a lot of energy. Absorption of impact energy from wave slamming is achieved through linear elastic deformation of the hull structure,” explains Lewit. “You get rid of the core, which adds weight and can break and absorb water.”

Bergstrom explains that, unlike the Navy combatant boat designs, the Sueños 53 design does not include a suspended sole for shock mitigation: “Those RIBs are much smaller than our vessel, and to suspend the sole on a vessel of this size would have required significant structural changes to the sides, so we opted not to go that route.” Also, the Navy boats used Structural Composites’ gel coat replacement, trademarked Sharkskin, a tough and flexible elastomeric coating that can handle any hull flexion. Again, that wasn’t an option for HydraSports Custom, says Bergstrom: “We’re marketing a high-end product, and had to present a glossy gel-coated hull for customers.” (Lewit’s company has developed a new gel coat solution that it calls CoCure for high-end applications.) 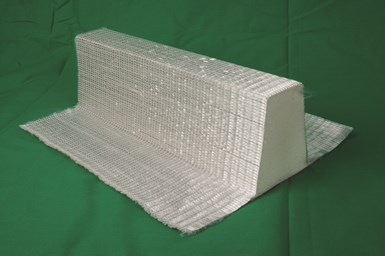 The basic frame component: An example of a Compsys Prisma composite frame, available in a range of lengths and sizes to meet the design parameters. The attached tabs allow the frame to be laminated to the single-skin hull. Source: Structural Composites

Using FEA, Lewit and Reichard worked on developing the thinnest possible hull laminate skin that was still rigid enough to handle the larger vessel’s weight. Says Lewit, “The design problem is thickness-sensitive. It’s a challenge to develop a flexible membrane hull laminate with sufficient load-bearing strength for the application.”

The process also required design and location of the hull’s low-section frames, which would be provided under the trade name Prisma to HydraSports Custom by Lewit’s and Reichard’s second company, Compsys Inc. (Melbourne, Fla., U.S.). Prisma frames are lightweight polyurethane foam covered with a reinforcing fabric. They come in several sizes — essentially off-the-shelf, tabbed, flexible preformed elements that can be tailored to length and location for the project (see photo at left). Smaller, 50 mm by 100 mm frames go down on the hull laminate first, followed by larger stringers, some as tall as 1.2m, on top of the frame network, with cutouts on their bottom edges to enable a tight fit over the low frames. The larger stringers support the flat sole of the Sueños 53.

To eliminate the possibility of gel coat cracks caused by hull flex, Reichard’s FEA pinpointed high-deflection areas, and the team adjusted the low-frame grid to make the hull panel size smaller in those areas by reducing the distance between the frame members. “The hull deflects, but with our adjustments to the preform grid, and some laminate padups for greater strength in a few areas, we were able to get deflection values well below the maximum elongation of the gel coat, so it won’t crack,” adds Bergstrom. The framing plan was “the largest and most complex Prisma hull kit we’ve ever done,” says Lewit. ”We’re calling the larger hull preform element kits MEGAFORM.”

Kitted, fitted and ready for resin infusion: The MEGAFORM hull preform kit is dry fitted into the hull, prior to wet lamination over the smaller frames. Source: Structural Composites

Going with solid laminate in the transom, however, was a big step, admits Bergstrom. Reichard recommended a single transverse frame across the transom width, supported by three tall Prisma preform beams connected to the hull frame layout (see drawing at the top of the article). Says Reichard, “The engines would be bolted through the transom laminate, with top bolts above the frame and bottom bolts below the frame.” The outboard engine thrust forces, then, would be transferred into the frame. “A traditional cored sandwich design strong enough to handle these outboards would have been too thick.”

Although the FEA showed the single skin/frame design was adequate to handle the four outboards, Bergstrom wanted a greater safety factor to ensure zero problems with the transom. He enlarged the dimensions of the single transverse frame and increased its laminate schedule. He also specified a polyvinyl chloride (PVC)-based, non-compressible liquid to be poured around the transom frame, the connecting stringer beams and the motor bolt locations: “Those engines can move, and start to loosen bolts over time. This solution keeps water out and further limits any movement.” These extra materials notwithstanding, the single-skin transom design weighed 227 kg less than a conventional cored sandwich solution, says Bergstrom. 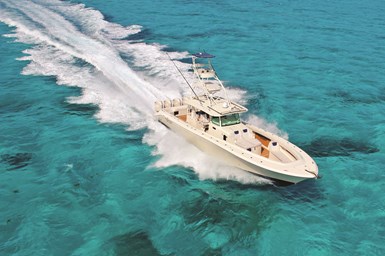 Bulked up for bigger engines: The Sueños 53’s hull and frame technology is designed for high speeds, reportedly up to 100 kph, for fast trips to fishing grounds (see next photo). Source: HydraSports Custom

For the hull laminate and transom, the team selected three plies of bidirectional knit glass fabric, supplied by Composites One (Arlington Heights, Ill., U.S.), and CoREZYN vinyl ester resin from Interplastic Corp. (St. Paul, Minn., U.S.). With the gel coat, also from Interplastic, and an epoxy barrier coat, the total laminate thickness would be ~12.5 mm. The Prisma MEGAFORM preform beams range in height from 50 mm to 1.2m, and up to 5m long, with plies of unidirectional glass fabric applied to the tops of the larger beams that support the sole. Several aramid plies are laminated along the Prisma keel beam, for abrasion resistance.

The hull and transom are hand layed at HydraSports Custom’s Vonore, Tenn., U.S., facility, and cured at room temperature (above 21°C) for 6-8 hours, depending on temperature and humidity. Bergstrom says resin infusion might be employed in the future. Assembled boats are then shipped to the Islamorada, Fla., U.S., facility for testing. A “factory boat,” one of the first vessels built, is taken out every week on long runs for durability testing. “On one trip,” he says, “we were moving fast and came over the top of a big wave, and dropped. The accelerometers we had installed in the boat showed a total impact of about 15G. There was no gel coat cracking or any damage at all. The design is really robust.” And it’s capable of speeds in excess of 100 kph.

Beyond the weight savings a single skin affords by eliminating core (about 1,360 kg), Bergstrom points to another benefit. Each Sueños 53 can be customized to the customer’s specific wishes, which sometimes means changes to the cabin, seating layout, fish lockers or additional appliances. “The stringer grid’s small panel sizes allows us to quickly make any change we need to accommodate customer tweaks, without any tooling changes or major ‘surgery’ to the hull,” he explains, noting, “I can just reposition the frames as needed. This design has allowed HydraSports Custom to elevate itself above commodity boatbuilding.”

Beefed up for big HP: The single transverse engine-bearing frame that spans the Suenos 53's transom (pictured here) was increased slightly in size from the FEA-determined design, together with a more robust laminate schedule, to handle the extra horsepower with a greater factor of safety, without significantly impacting weight. The change was made for greater security when the four outboards were bolted through the transom. Source: Structural Composites

Leva unveiled the boat at the 2015 Miami International Boat Show, explaining to the crowd that “sueños” is the Spanish word for dream. By show’s end, the craft had won an Innovation Award for best center console walk-around fishing boat. Later it was declared Top Product for 2015 by Boating Industry Magazine. The company is currently producing one Sueños 53 per month, and Bergstrom says there is a lengthy customer waiting list.

“It is really wonderful to see how the advances we are achieving for the Navy benefit the recreational boating industry,” adds Lewit, noting that the Sueños is one of the first commercial deployments of the Navy SBIR work. “Back in 2004, when we first envisioned the single-skinned hull and transom approach,” he quips, “people thought we were insane!”