As a new, university-directed research program, the Technical University of Munich Hyperloop team works to scale up its SpaceX competition-winning pod design.
#trends

Hyperloop got its start in 2013, when Elon Musk, CEO of SpaceX (Hawthorne, Calif., U.S.), put out his famous white paper. He outlined his vision for a new mode of high-speed transportation where pods would transport passengers along a track. From his initial idea, startups and universities alike began getting in on the action and developing their own pod and track designs, and from 2015-2019, SpaceX held an annual international competition where teams could pit small-scale pods (2 meters in length by 0.5-meter width and height) against each other.

The Technical University of Munich (TUM; Munich, Germany) took home the trophy four times with their fast composites-intensive pods. This summer, the university announced that TUM Hyperloop is transitioning its student Hyperloop team into a university-backed research group. Their next challenge will be to use the skills and materials knowhow they gained from the competitions to develop a full-scale (2.5 meters in diameter, 4 meters in length) Hyperloop pod and track demonstrator.

In 2016, the TUM Hyperloop pod won its first SpaceX competition award in the speed category, with miniature pods racing along a 1.2-kilometer track built by SpaceX. For the three following competitions, the team decided to focus solely on increasing speed.

From the beginning, the team chose carbon fiber composites for the pod’s outer aeroshell covering, but the first competition pod sported an aluminum chassis — the main, beam-like support structure that the rest of the systems attach to. Driven by a desire to increase speed by lowering the pod’s overall weight, the team switched chassis construction to a composite structure with the second competition — specifically, unidirectional carbon fiber/epoxy reinforced with foam materials in certain areas. “Aluminum allows you to have a very modular design, but the thing is that, in general, it was relatively heavy, because in addition to the profile pieces themselves you have all of the screws and joints,” says Gabriele Semino, project lead at TUM Hyperloop. Semino started out as a student involved with the TUM Hyperloop team, and, now a recent TUM alum, was hired on as the first full-time staff member at the beginning of this year. He adds, “Carbon fiber really allowed us to have way less weight for the same structural stiffness and also to have whatever shape we wanted to have in particular.” 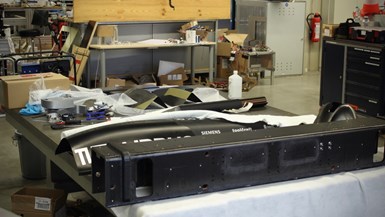 The use of composites came with a learning curve for the student team, Semino says. Unlike working with aluminum, “the disadvantage [with composites] is that at the moment the design is fixed and you start manufacturing, you can’t later on just unscrew a piece of carbon fiber and put it somewhere else — that doesn’t work,” he says. “You have to be very careful in your design process.” He adds that the team also had to learn to use carbon fiber correctly. “A general misconception about carbon fiber is that the moment you use carbon fiber, everything gets lighter. And that’s actually not the case if you use carbon fiber wrong.” For example, Semino says that for the second competition, the team built the pod chassis from carbon fiber, but it was not yet optimized, and weighed about 11 kilograms. For the next competition, the team worked with local consulting company Ixent and, employing digital simulation tools, they figured out how to build a very similar composite part that weighed less than 6 kilograms. “We saved quite a lot of weight, meaning we gained quite a lot of speed for the competition, just by using carbon fiber appropriately,” Semino says. 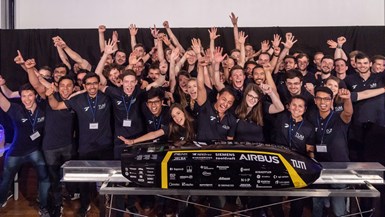 “Over the years we built a faster and faster prototype,” Semino adds, “but in parallel to that, we also realized pretty quickly that the speed was not enough to make Hyperloop a reality.”

Consequently, the team began to devote about 10 of its around 40 student members each year to developing small research prototypes — separate from the competition pods — to test other aspects of Hyperloop design. For example, Semino says the competition pods ran on wheels, but with the research pods, they were able to experiment with magnetic levitation, which would be necessary for the speeds an eventual higher-speed, full-scale Hyperloop pod would need to travel. Other research pods tested contactless propulsion systems and infrastructure components such as different vacuum tubes, he adds.

The research pods, in combination with the attention from the competition wins, led to the team taking its Hyperloop aspirations to a new level this year.

Taking Hyperloop to the next level

At the beginning of 2020, TUM Hyperloop decided, along with the university’s upper management, to pivot away from the competition (which ended up not taking place in 2020 anyway) and take its Hyperloop concept to the next level, with a full-scale pod demonstrator and short, 24-meter full-scale track. Some progress has been delayed due to the pandemic, but Semino says the program is hoping to have a preliminary design of the whole system by the end of this year, to go through testing for much of next year and to be able to present a full-scale prototype by the end of 2021.

The TUM Hyperloop team was originally a completely student-led program with a few faculty advisors, but the program is slowly adding full-time staff members like Semino from among the pool of former student participants. “It adds a level of professionalization to the project,” Semino says. As a university program, one of TUM Hyperloop’s goals is still to give students hands-on experiences, so a large part of the team will continue to be students working for class credit or as an extracurricular activity — in fact, the student workforce has scaled up in 2020 from 30-40 students to about 70, Semino says.

“Over the years for the competition, the project was financed by cooperations with companies,” Semino adds. “We’ve built up quite a large network of partner companies. For the last competition, we had around 60 partners that we worked with — some helped us financially, some helped us with materials or manufacturing capacity.” The combination of expertise from its connection to a technical research institution, alongside industry partners and advisors, is highly beneficial, Semino adds.

Much of the progress so far this year, Semino says, has been research into the concept itself: “One common misperception about Hyperloop is that Elon Musk did all of the concept work, and in his white paper he presents a perfect design and one just needs to build it.” In reality, he says, Musk’s concept outlined the business case for the type of transportation Hyperloop should be, but that most competition teams and companies working from his initial idea have strayed pretty far from the original technical specifications. “If you look at different Hyperloop initiatives,” Semino says, “they’re all pretty different in terms of how they look.” TUM Hyperloop has been doing research into the advantages and disadvantages of many systems that have already been tried or designed, either for competitions or larger prototype designs. “We wanted to really take the time to look at the literature, do simulation and modeling, and think through the issues with some of the designs we’ve seen, and do quite a detailed analysis.” Along with self-developed modeling tools, TUM Hyperloop uses ANSYS (Canonsburg, Pa., U.S.) modeling software. Semino emphasizes that though a variety of companies and organizations are designing different Hyperloop models at the outset, eventually, “the designs will converge” into a design that will become the first standard, once all of the pros and cons are teased out.

As far as standardization goes, though, Semino believes there’s still a long way to go for Hyperloop. This year, auditing and systems certification company TÜV SÜD (Munich, Germany) released some preliminary guidelines for Hyperloop transport for Europe, and there have been some discussions among companies that are further along with their prototypes, but “I think it’s going to take longer than some might believe,” Semino says.

The 2021 demonstrator will not be quite ready for passenger travel yet, Semino notes, but it’ll be TUM Hyperloop’s next, big step in that direction. “It’s really a learning experience,” he says. “We know that in order to get to a final system we need to go step-by-step and learn along the way.” He adds, “Scaling up is not usually as trivial as it sounds, in the sense that, a small-scale prototype obviously cannot be a full-scale system. Some things don’t scale down that well, and some things don’t scale up that well.” For the competition prototypes, he notes, the pods included just the bare minimum components necessary in order to reduce weight and travel as fast as possible. Now, the goal is to build a pod that would, in theory, be the correct dimensions and include all the necessary components for safe passenger travel, vertical levitation and contactless propulsion. The team is also working on the infrastructure elements such as the track the pod will travel in. “There are a lot of different subsystems working together in order to transport people,” Semino says.

Material decisions have not yet been made for the first full-scale demonstrator that the team is working on, but materials are part of the program’s current research phase. Whether the team chooses carbon fiber or more modular, less expensive aluminum for its first demonstrator, Semino says he is sure that “a final Hyperloop system for passengers would massively use carbon fiber, once the design is optimized.”

For more on composites use in Hyperloop, see “Into the Hyperloop.”