The Scorpion jet flies over Corfe Castle, in Dorset, U.K., near the end of its first transatlantic crossing. The tactical jet prototype has garnered interest at its appearances in Europe, including the recent Farnborough Air Show. Source: Textron Airland

The back side of the demonstrator fuselage tool shows the backup structure and integrated “ribs” on the tool surface to add rigidity. Source: Leading Edge Aerospace

Closeup view of carbon tubing backup cart/structure for the wing skin tool. Note that the structure is attached with adjustable clevis system, for slight adjustments of the tool face if needed. Source: Leading Edge Aerospace 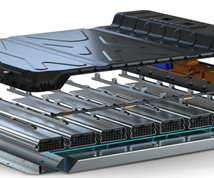 As defense budgets shrink and world unrest expands, military agencies the world over are looking for ways to economize. High-end fighter aircraft, such as the Lockheed Martin F-35 Lightning II, cost in the neighborhood of $100 million (USD), a steep price tag for any air defense entity. Textron (Providence, R.I.) and Airland Enterprises LLC (Garland, Texas), a group of aerospace and defense veterans that includes former U.S. Air Force Secretary Whit Peters, decided in 2012 to team up and develop a more affordable complement to traditional high-dollar fighter aircraft. Working secretly at a Cessna Aircraft facility in East Wichita, Kan. (Cessna is a Textron company), the “skunk works”-like endeavor was a “clean-sheet” design of a small yet effective jet aircraft for multiple markets and — significantly — realized with off-the-shelf technology. The result is the Scorpion, a composites-intensive, tandem-seat, twin-engine tactical jet fighter, unveiled this year and self-funded by Textron Airland LLC (Wichita, Kan.), a joint venture of Textron and Airland Enterprises.

Textron Airland took the Scorpion from concept to first flight in an unheard-of two-year time frame, a feat made possible, in part, by tooling partner Leading Edge Aerospace (LEA, Wichita, Kan.). “This was an extreme development schedule,” says Dale Tutt, Textron Airland’s chief engineer. “We had to develop the tools in parallel with actual aircraft design. We were very fortunate that LEA provided innovative tooling concepts that kept us on schedule.”

Meeting requirements with the right process

LEA’s composites manager Rod Brown explains that Textron Airland’s mandate presented a huge challenge. The customer wanted autoclave-capable prototype tooling that could hold tight tolerances on an accelerated schedule, but at relatively low cost. Two wingskin tools (upper and lower), each 49.5 ft/15.1m long and approximately 7 ft/2.1m wide, would be required, as well as four spar tools, to fabricate the supporting spars for the main wing and the horizontal stabilizers. Further, an assortment of smaller tools, for the multipiece fuselage and other parts, had to be produced as well. All parts would be molded from carbon fiber prepreg and autoclave-cured.

“We had to juggle the tradeoffs between materials and process,” Brown recalls. “If we had chosen prepreg for autoclave service and durability, the cost would have been too high for prototype tooling. We had to find a way to minimize costs and still get the tool quality we wanted.” LEA opted to try infusion and oven cure, using more economical dry carbon fiber fabrics with epoxy resin, and then using postcure CNC-machining to bring tool faces to final tolerances.

The approach presented some risk, Brown admits. “Every step in the process had to be perfect,” he explains. “Any shortcuts that led to vacuum leaks could cause voids in the laminate, which ultimately would cause tool leakage.” In his view, however, many companies give up too soon on infusion for tools, without fully understanding and optimizing their methods. He believed that LEA had a plan that would work.

Textron Airland provided LEA with CAD files, produced using CATIA software from Dassault Systèmes (Waltham, Mass.), for each of the Scorpion’s composite parts. Brown says LEA evaluated the files in detail and modified them to create tool files. Generous edge flanges, for example, were added for vacuum bagging. Likewise, excess material was added to the tool face, where needed, to account for postcure machining, and backup structures and transport carts were designed.

High-density polyurethane foam supplied primarily by Coastal Enterprises Co. (Orange, Calif.), in densities ranging from 10 to 30 lb/ft3, was machined to form the tooling masters. “If a tool surface was not planned to be CNC-machined, then the master was made as a male and the final tool surface was layed up against it,” explains Brown. If, however, the final tool surface was to be machined, typically for “controlled” aerodynamic parts that would be exposed to the airstream, it could be made as a male or a female, provided sufficient allowances were made for the postcure machining operation. The machined masters were sealed with a primer supplied by Hawkeye Industries Inc. (Bloomington, Calif.) and then finished with Hawkeye’s Duratec topcoat.

To ensure the highest quality in the infused laminates, LEA devised an infusion schedule that allowed up to three hours for the resin to fully saturate the layup, followed by a 12-hour oven cure cycle, under vacuum. After demolding, each tool would be postcured at 400°F/204°C for 12 hours.

There was some concern, initially, that the part shapes might cause lockup in the tool, preventing part removal. Also, the work envelope on LEA’s CNC machine was, at that time, smaller than the largest tools in the tool set. (LEA has since installed a larger Anderson CNC machine.) Both issues indicated that multipart tools might be required, says Brown, so a deep-draw, two-part infused demonstrator tool was fabricated to prove feasibility (see third photo, at left). A longitudinal seam runs down its middle where the two parts are bolted together on the back side; a bead of high-temperature silicone along the seam would prevent tool leakage. “In the end, we didn’t have any lockup with any of the parts,” he says, “but some of the tools required multiple sections due to their size.”

Tool layup involved balancing the number of material plies with part production demands. Says Brown: “If you use a single piece of cloth along the length of the layup, it can induce warpage of the tool face during heat cycles.” Instead, the carbon fabric was cut into smaller panel shapes and several plies were layed over the sealed foam masters in a manner that reduced the risk of distortion. An Airtech tackifier held dry plies in place, maintaining fiber orientations during the layup process. The goal was a tool thickness of 0.25 inch/6.35 mm — anything thinner would be too flexible. Greater thickness would use more cloth, adding weight and cost, and also would take longer to heat during the cure process. “Production tools are typically closer to a thickness of 0.5 inch [12.7 mm], for better durability and longer life, but we didn’t need that for the prototype Scorpion parts.”

For those tools slated for postcure tool face machining, layups were built up from the backside on a female foam master. Grooves machined into the master face allowed layup of carbon cloth to form a pattern of integral ribs, adding backside stiffness to the cured tools (see fourth photo, at left).

Tool rigidity was ensured with steel or carbon-composite square-tube backup structures and wheels. An adjustable clevis system added on the long wingskin and spar tools and some smaller tools, enabled tool-face adjustments to maintain accuracy over tool length. A clevis fastener system, commonly used in many equipment applications, uses a u-shaped “clevis,” shaped like a tuning fork, with a clevis pin inserted through holes in the prong ends and held in place by a split pin, to allow rotation in some axes while restricting rotation in others. Ultimately, the customer was happy with a variance of ±0.020 to ±0.030 inch over the length. Following postcure, tools were treated with sealer and Chemlease mold release from Chem-Trend LP (Howell, Mich.).

“Vacuum infusion can produce tools better than wet layup, and nearly as good as prepreg,” concludes Brown. “It’s a function of good shop practices.” The prototype infused/machined tools should be more than sufficient for five production cycles, at considerably less cost than a prepreg solution, he claims. Flight and systems testing is ongoing for the first prototype aircraft, and a second prototype from LEA tools is in process.

A commercial product with military potential

After more than 70 flights, including a trip to the Farnborough International Air Show in July, Scorpion is attracting potential customers. “We are working with more than one credible country,” says Textron Airland’s president Bill Anderson. Said to be capable of security and reconnaissance missions, in a niche between strategic but aging military craft and elite strike fighters, Scorpion will have a price tag of about $20 million (USD) and much lower operating cost than the latter. Low-volume production could begin in 2015. Brown says LEA hopes to be selected for rate tooling and is considering both carbon/epoxy prepreg and Airtech’s Beta benzoxazine prepreg, based on resin technology from Henkel Corp. (Dusseldorf, Germany).