Wind turbine blade architecture is so well established that it’s difficult to imagine there might be a better alternative. ACT Blade’s skeleton-based design is a step in that direction.
#focusondesign #windblades

There are several operational factors and requirements that have guided design and development of composite wind turbine blades over the last 20 years. The most important factors and requirements are low material weight/density, high strength to withstand wind and gravity loading, good fatigue resistance to withstand cyclic loading, good stiffness to maintain blade shape, good fracture toughness and environmental durability in the face of lightning strikes, bird strikes and wind erosion.

Traditional wind blade design — glass fiber laminate shell over a balsa/foam core, surrounding a composite shear web — have done an admirable job of addressing these requirements. But as wind turbine blades get longer, wind turbine manufacturers are looking for ways to reduce materials use, reduce weight, decrease costs and increase manufacturing efficiency. While there have been, particularly over the last decade, incremental improvements in materials and manufacturing processes that have improved overall blade quality as well as production efficiency, the current design does have its limits, and at some point a change in design fundamentals might be in order.

Whether such a wind turbine blade design paradigm shift has arrived remains to be seen, but a new design and manufacturing concept developed by ACT Blade Ltd. (Edinburgh, Scotland) could be that change catalyst.

ACT Blade is led, in part, by Sabrina Malpede, director of the company and one of its founders. Malpede grew up in Italy but migrated to Glasgow, Scotland, in 1997 to earn her Ph.D in aeronautical engineering. She got involved in the university’s entrepreneurial venture program and eventually, with a partner, started writing a business plan focused on development of a wing/sail for yachting. Eventually, in 2004, Malpede helped found SMAR Azure Ltd. (Edinburgh), which produced software for yacht and sail design. Malpede says this business was highly successful, but when the Great Recession hit in 2008-2009, demand for the company’s products waned.

Still, in the world of yacht racing (i.e., America’s Cup) sail technology was migrating toward the creation of the composites-based wing sail — literally a vertical composite wing acting as a yacht sail. SMAR Azure Ltd. found itself in the midst of this evolution. 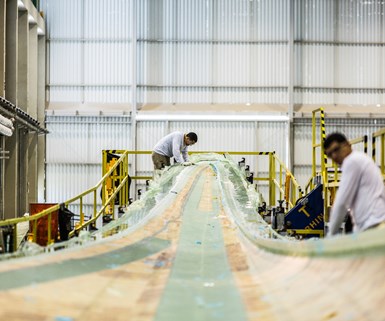 Traditional wind blade design requires placement of dry fibers and balsa and foam core materials in an open mold. The entire structure is then infused with liquid resin. ACT Blade’s design is a substantial departure from this concept and could help reduce blade weight and overall manufacturing cost. Source | CW

Around 2012, says Malpede, “We looked at ourselves. We had all this knowledge inside the company — tensile structures, wings as sails, composites. We did a strategic evaluation and decided we should focus on lightweight structures, sustainability and design with composites.” As Malpede and her colleagues looked around for opportunities to apply this new strategy, they kept coming back to wind blades. “We were constantly thinking about how we can use our knowledge in wind power,” she says.

The link between wing sails and wind turbine blades, Malpede notes, was a natural one: “A yacht uses a vertical wing. And a wind turbine uses three wings. Could we design a new wind blade?”

Answering that question required an assessment of current blademaking materials and processes. Malpede lists the challenges: “Fabrication of a shell with a shear web requires dramatic, expensive, specific tooling. The ability to make different blades sizes requires a different mold. Capex is high, expansion of new facilities is difficult and the only way to offset high material costs is to go to a country with low-cost labor. Change occurs, but it’s incremental, and there is not enough change in the industry to make blade manufacturing as flexible as it needs to be.”

Moreover, notes Malpede, traditional wind blades sometime struggle to adjust to wind conditions sufficiently to maximize power capture. When this occurs, the blade suffers from the strain. In ACT Blade’s wind blade design patent application, it notes that, “The power generated by a wind turbine is also dependent on the aerodynamic shape of the wind turbine blades. The optimal aerodynamic shape of each blade depends on wind conditions and the loads exerted on the blade during operation. There is, therefore, a need for blades having advanced control features which allow the aerodynamic shape and properties of the blades to be actively controlled in response to changing wind conditions in order to further improve wind turbine efficiency.” Further, notes the application, “Traditional trailing edge flaps also tend to be heavy and slow to respond to actuation. Failure of a trailing edge flap can have significant negative effects on the operation of a wind turbine blade.”

With all of this in mind, ACT Blade was founded in 2015, launched on the promise of a feasibility study done to assess the viability of a new blade design that represents a significant departure from the norm. 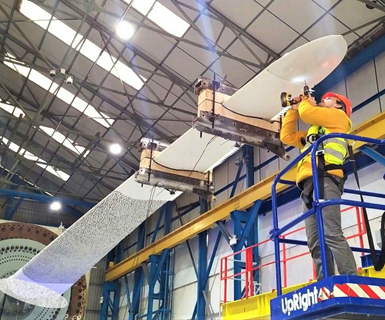 ACT Blade tested its 13-meter ACT27 blade in early 2020 and is now in the process of fabricating three more ACT27 blades for installation on a Vestas wind turbine near Glasgow, Scotland. Source | ACT Blade

ACT Blade’s idea was the development of a blade that facilitates lighter-weight, less expensive construction, culminating in a design optimized to quickly and efficiently adjust so as to maximize energy capture, particularly in offshore applications. The design ACT Blade came up with is, actually, a familiar one to anyone who understands aeronautics. It is comprised of a spar to which is attached a series of ribs. Overwrapping this spar/rib structure, in tension, is a technical textile — called a “sock” — that provides the aerodynamic surface the blade requires for wind capture.

Malpede says this design does several things, the first of which is the provision of a flexible trailing edge — not as rigid as those found on traditional blades — that keeps its shape, but can still adjust quickly to changing wind conditions. This flexibility comes from the fact that the textile, although attached to the spar, possesses enough freedom to move over the spar. As noted in ACT Blade’s patent application, “By sliding, bending or flowing around and/or along a portion of the wind turbine blade, the flexible external skin is able to accommodate any adjustments in the internal structure, thereby varying the aerodynamic profile.”

Second, Malpede notes, because the textile is pulled over the spar like a sock, blade component fabrication can be performed in parallel, not in series as is currently done in a traditional blademaking facility. This helps optimize and speed up blade fabrication.

Third, the use of a relatively simple spar and off-the-shelf materials for the sock avoids use of “monumental” molds and other capex-intensive equipment required for traditional blademaking.

ACT Blade commissioned the Lightweight Manufacturing Center (LMC, Glasgow), affiliated with the University of Strathclyde, to manufacture one 13-meter prototype of its blade design, which ACT Blade has been testing. Malpede says most of ACT Blade’s design and engineering has focused on development and assembly of the sock. The sock material itself, she says, is a “conventional polyester textile, woven type, widely used and inexpensive.”

It is comprised of two layers, an inner “structural” layer and an outer “environmental” layer. The outer layer, which is tunable, protects against UV light, hail, rain and sand. The sock is comprised of a series of 1-by-60-meter films, cut to shape and bonded together “like a sail.” The sock ranges from 0.58 to 0.70 millimeters thick, depending on the level of environmental protection required, and after it is applied, does not require painting or coating.

A technician at the Lightweight Manufacturing Centre (Glasgow, Scotland) positions a prototype of the ACT Blade composite spar into a fixture for the attachment of the composite ribs. The spar and ribs, together, form the “skeleton” of ACT Blade’s new design for wind turbine blades. Source | ACT Blade

The spar is a two-part infused structure, made with glass fiber and epoxy. The two halves are bonded together, and to that structure are bonded the ribs, also made with glass fiber and currently fabricated via hand layup. Chord and twist of the blade, says Malpede, can be easily adjusted without purchase of additional tools, while length can be varied with minimal additional tooling, enabling substantial production flexibility.

The sock, says Malpede, is literally pulled over and then attached to the spar/rib structure. “The critical thing is to make sure we have the tension we need where we need it,” Malpede says. “That has definitely been one of the biggest challenges. We need better process control for this. We are assessing tension like a musical instrument that is out of tune.”

Further, Malpede emphasizes, in production all three blades for a given turbine must be under the same tension in the same places. “Otherwise,” she says, “you have an imbalance in forces that can lead to instability. The key is repeatability.” Ultimately, Malpede says, ACT Blade would like to develop a production process that allows on-site or near-site blade assembly, with blade components delivered as kits.

Testing of the sock for durability loads has been promising. Malpede says the failure mode for lightning strike is “not an issue at the moment as the material is not conductive. At the moment we know our design keeps working with damage.” Still, like traditional blades, an ACT Blade must be repairable; Malpede says the company is evaluating repair strategies, as well as a rain erosion solution.

Numbers and next steps

Malpede says ACT Blade’s calculations show that the sock-over-spar design, compared to a 50-meter traditional blade, can trim weight up to 32% and total costs by 17%. These numbers will change depending on the size of the traditional blade used for comparison.

As noted, ACT Blade has made one 13-meter blade, called the ACT27, which Malpede says has a technical readiness level (TRL) of about 6.5. Three additional ACT27s are being fabricated right now and are expected to have a TRL of 7.0. These blades will be fully instrumented and mounted, by the end of 2020, on a 250-kW Vestas V27 wind turbine located just south of Glasgow. If all goes well, ACT Blade will ramp up full production of a 49-meter blade, called the ACT100, in 2021. 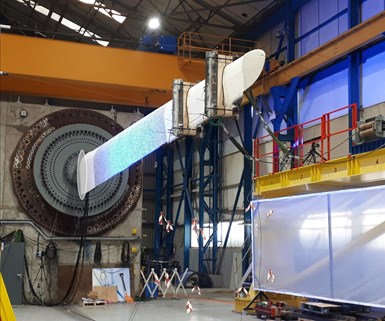 The 13-meter ACT27 blade developed by ACT Blade undergoing an edgewise test. The blade is comprised of a structural composite spar with reinforcing ribs, overwrapped by a technical textile that provides the aerodynamic surface. Source | ACT Blade

Currently ACT Blade is working with contractors to fabricate blade components, with assembly done at ACT Blade. That strategy likely will continue, although Malpede admits it’s possible all production will eventually be brought in-house.

The company will go to market first offering the ACT100 as a reblading option for turbines already in operation. “Then, in 5-6 years, we look to working directly with turbine manufacturers,” Malpede says. The ACT100 will be tested and certified, depending on country of operation.

“ACT Blade has reached a crucial phase of its development,” Malpede says. “The company has developed a small series of four ACT27 blades and we are looking forward to test three of them on a real turbine by the end of the year. Lighter, modular and cheaper to produce, ACT Blade is a leap forward in blade technology and we have no doubt that it will promote the growth and expansion of wind energy and augment the electrification of even remote areas of the world.”